- July 22, 2010
oh brewdog!  what a fabulous thing it is that you went above and beyond and brewed the 32% tactical nuclear penguin! 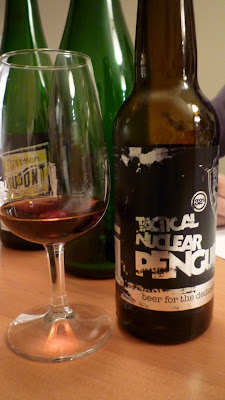 oh firefly!  what a fabulous thing it was to do to let a group of us taste the precious nectar that is the tactical nuclear penguin!

what to say about the once-strongest beer in the world?  well, it looks and smells like sherry in the glass.  there's no carbonation and its mighty thick stuff.  a very boozy nose with definite flavour pulled from the oak barrels it aged in.  the first sip is straight booze.  on the second the chocolate notes come through.  it would make a great aperitif or dessert wine.  but make no mistake - its a beer. 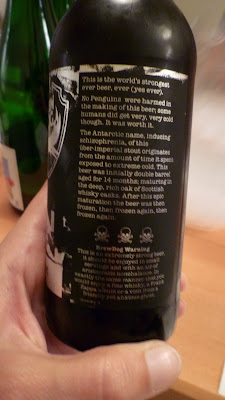 did i like it?  yes i did.
would i buy a bottle?  probably not.  its outrageously (although justifiably) expensive and i'd want to share it between several people again.  there's no way i'd want the whole bottle to myself!
am i glad i got to taste it?
omg!  it was a beer geek dream come true!!
and this is how i know i truly am a big ole beer geek... 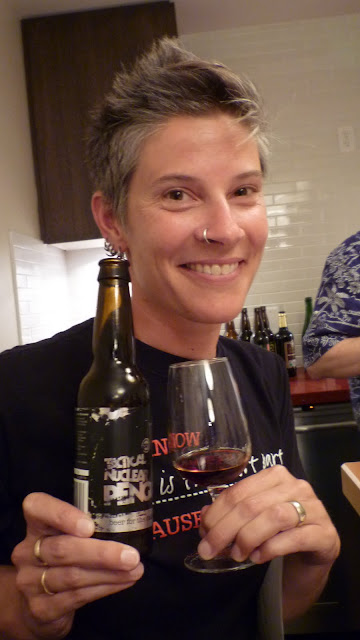 damned 32% though... i meant to bring the bottle home and add it to my beer geekery collection, but i got a little tipsy at the tasting and totally forgot.  thank dog i got me some photos though!
beer brewdog brewery firefly tactical nuclear penguin

- March 26, 2019
I'm single.  I have been for several years.
I was really enjoying my single state during those years.  I did what I wanted, when I wanted.  It was pretty glorious.
I've started thinking though, that I would like some companionship too.

Now that I have popped by head up and looked around, I realize I have no idea how one goes about meeting people.
I have friends.  But there's not a pool of potential dates within that friend group.  Or anyone with a secret stash of available friends of friends they have somehow kept from me until now.

How did I used to get dates?
I would start playing a new sport.  Or go to the bar.
I'm middle-aged now.  There is no bar.
I don't think.
Is there one?
God, if there is, someone tell me where it is!

I understood the etiquette of meeting people at bars.
I do not understand this whole internet dating and hooking up thing.
I wish there was a book - How to Internet Date for Middle-Aged Dummies
There is this cheatsheet, but geesh, how old do …
Read more