Showing posts from April, 2011
Show all

Tofino Brewing Company opened their doors to the public on Saturday April 16th, selling growlers of their first beer, Tuff Session Ale, a west coast style pale ale. Tofino Brewing brewmaster Dave Woodward (formerly of Brew House at Whistler), writes in to say the local response has been overwhelming, with Tofino residents consuming more than 300 growlers over the past week in addition to Tofino draught accounts. Hoppin Cretin IPA, Dave's next beer, will be on sale at the brewery this week. Dave describes this as a northwest IPA, well hopped with Columbus, Centennial, and Citra. 6.5%, 60 IBUs. Here's hoping we see some of this on our side of the Strait!
Post a Comment
Read more

- April 28, 2011
the vcbw collaboration beer is ready!
can't wait to get my paws on some
cascadian dark ale (aka black ipa) = delicious!

- April 28, 2011
lordy, not only am i guest-listed for the vcbw women in beer night
i've been tapped to give a five minute chat about being a female beer blogger
yikes!
so very exciting
but lord, i have homework for vcbw!
Post a Comment
Read more

- April 27, 2011
hmmm, i wonder if a white ipa would be to my liking?
i mean, its still belgian but maybe the hops will be enough to overpower that confounded yeast that i just don't like!

- April 27, 2011
i hate when i have what i think is a brilliant idea
and then someone else beats me to it!
dammit janet!

next time i had a few weeks between contracts i was going to try to live on beer alone
(don't think it would go over so well while at work...)
and now there's a guy who did just that for lent
(me, i just gave up chocolate, potato chips, ice cream and pizza - and i made it, all 46 damned days!)

Join us for a day of circus entertainment, live music, craft beer tastings, food and a whole lot of freaky fun!

A benefit for the Petaluma Music Festival featuring... 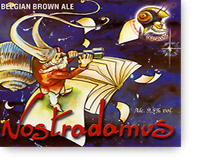 i didn't realize when i grabbed the nostrodamus that it's a belgian beer
all i saw were the words 'strong brown ale'
and that was enough for me!

it certainly is a strong brown ale
and it is a belgian
made in belgium even!
i enjoyed the taster size glass i had of it
but i won't be buying it again
i really wish i could get over my inability to enjoy the belgians
it pains me to have to avoid such a large category of beers!

yes - its a beer book!!!
and a bloody funny one at that
i strongly suggest all y'all read it
i'll lend you my copy as soon as i finish pulling out a million funny quotes for this blog!
Post a Comment
Read more 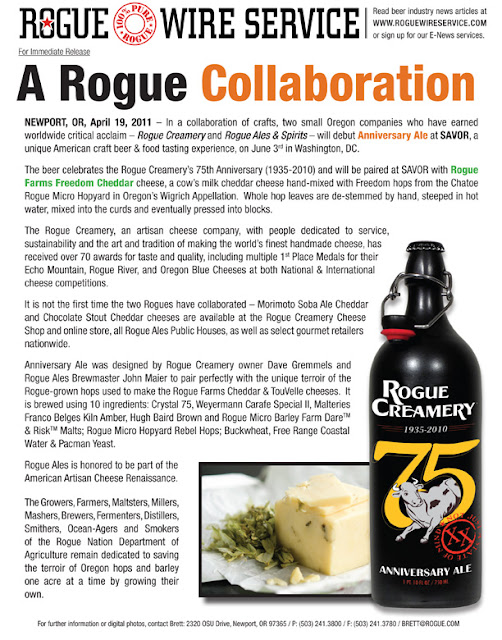 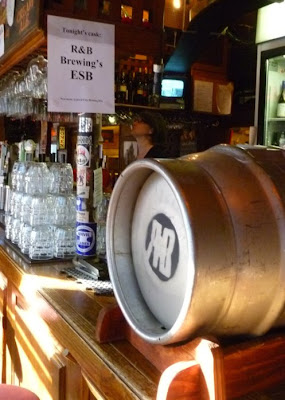 well, it wasn't the promised agave cactus wheat ale, but it was delicious!!
r & b's esb 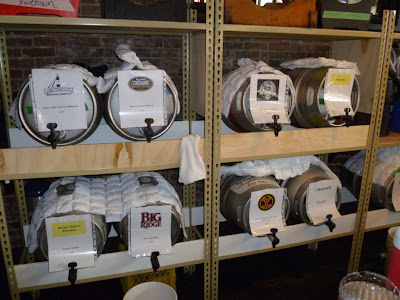 oh the beers i did drink!

camra vancouver's spring sessional featured a schwack load of casks
all intended to be below 3.5% abv
most made the 3.5% cut, but a few did not
all however, were big on flavour!

the wall was a thing of beauty and a joy to behold
but boy, did it ever make for crazy cramped quarters when you're back there pouring!
still, having the central place to procure beer left the rest of london pub for mingling
which i found to be an improvement over the winter fest at st. augustine's that featured casks all around the outside of the establishment leaving only the crowded centre for mingling
and, patting myself and all the other amazing pourers on the back here, the line up at the central location did not ever get unbearably long
so, thumbs up to camra executive (and president martin who built it) for the novel wall of casks!


i managed to try most of the casks, skipping only the wheat and the …
Post a Comment
Read more 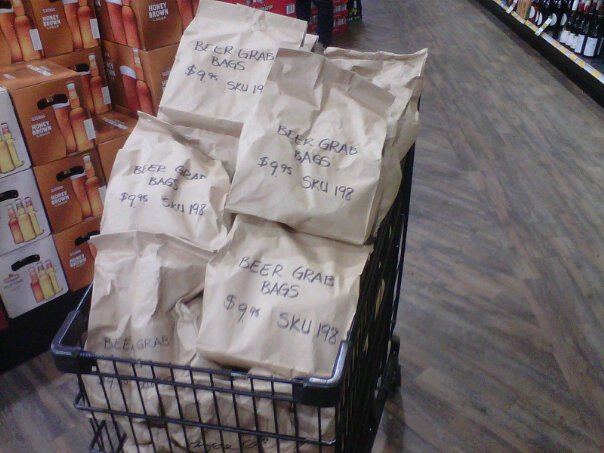 stolen from my friend's facebook
photo credit rhiannon lee helmes
(and no idea which lovely alcohol selling establishment this is actually at... but i'm intrigued!) 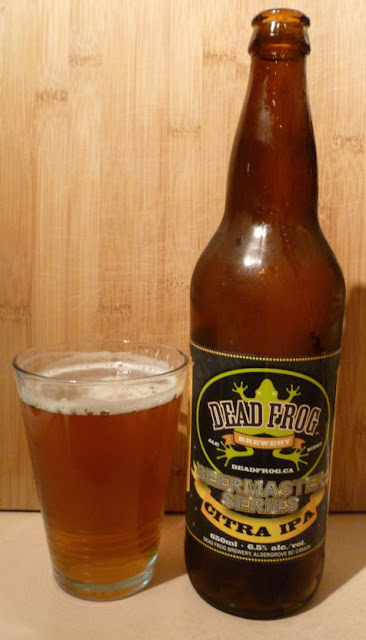 i love the dead frog citra ipa
yes, oh yes i do!
it makes me feel warm and fuzzy inside
just like a good hoppy beer should
and for that i am eternally grateful!


i have had this elixir on tap at places like st. augustine's
and purchased the big ole bottles from specialty beer stores
and i like it all!

the bottle says:
6.5%
dead frog citra ipa is a high hopped, high alcohol, high bitterness true ipa that is like an invigorating open handed slap of citrus awesomeness!!!
you hold in your hands the pinnacle of brewing innovation.  beermaster series is a harmonious combination of premium quality beer and ingenious flavour design.  we bestow upon you the finest beer in the universe!  cheers!

i'm bummed that it is only a limited release
but i guess they sure did leave me wanting more!
and i hear that maybe, just maybe it will be popular enough to make it into regular rotation
is my love strong enough??

for the brewed awakening story on the citra ipa, click here

guess who just got guest-listed for a fabulous vcbw event???
for the very slow, but lovely all the same, it's me!
finally being a blogger comes in handy!
oh, and that whole being a girl thing too...

this is where i'll be
and i couldn't be more pleased!
i either already know and love, or can't wait to meet and totally admire, everyone on the panel
and i'll be eating chocolate again by then - yay, yay and oh, um, yay!

Signature EventRepublic
958 Granville St, Vancouver (map) 6:00pm – Late
$55 all inclusive The Donnelly Group Presents Women and Beer IIStill think the craft brewing industry is a boys club? Allow us to prove you wrong by showing you what the industry’s finest females have on offer. Join us at Republic for five small-plate courses paired with beers from R&B, Howe Sound, Mt Begbie, Crannog, Saltspring Island Ales, Spinnakers as well as a special ladies only collaboration beer brewed just for this event.
Post a Comment
Read more 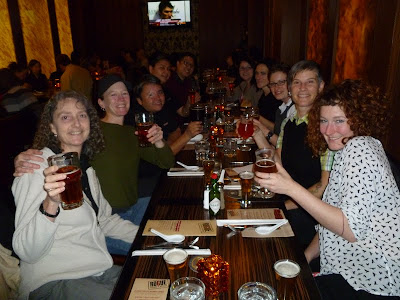 the lovely beer pairing dinner of last week:
﻿
﻿the ginger beer arrived first at 7:15
i had already had several pints by this point
not so much that i couldn't appreciate the lovely ginger beer
but enough so that food with my beer would have been welcome
(note to self:  stop drinking before dinner!)

everyone raved about the amazing pairing of ginger beer with the pork belly soup
but there was a request for more kimchi in the soup to improve the pairing
me, i just love ginger beer and think it goes with most things!

originally the ginger beer was just a limited run by phillips
but people in victoria extolled its virtues enough that they brought it back
keep extolling the virtues people, my world needs more ging…
Post a Comment
Read more 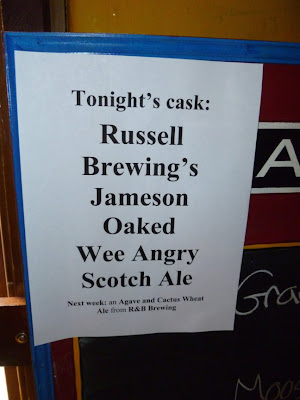 
served a little too cold on the tapping
the further we got into our potent little glasses the more the whiskey made itself known
warm for sure, to much alcohol, i didn't think so

i had a dinner to get to right afterwards so i tried to be prudent and only have the one glass
prudent or not, that one glass went right to my head!

and in honour of the play-offs to begin the next night, railway staffers got creative and built their own arena, fully equipped with jumbo-tron as well!
i love crafts!

if my plans do not go ahead tonight, i am intrigued to try the r&b agave cactus wheat ale on tap this week﻿ 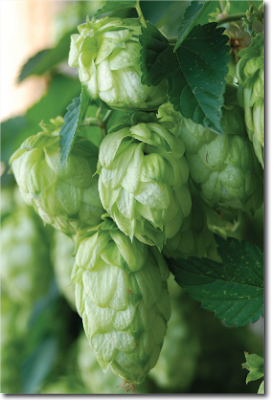 i asked a friend who is into herbs and naturalism to do a little hops research for me
this is what she came up with:


What I could gather is that boiling the hops does not counteract their medicinal properties. It seems in old remedies, the hops would be boiled into teas. So, like most herbs and plants it actually brings out more of its benefits. This makes a beer like a large tincture! It is just a highly concentrated amount of the plants that go into making it, and the alcohol is going to help preserve the properties and allow the body to absorb it a bit more.

The only thing that I could see thwarting the benefits, is if the brewer adds extra additives or preservatives, uses non-natural sources of the plant, or if the beer has too high an alcohol content.(in which case the body doesn't absorb, the liver actually starts to fight the affects).

I also found that hops can give their medicinal properties whether dry or boiled. People would fill a pillow wi…
Post a Comment
Read more

- April 18, 2011
women liking beer
women in brewing
apparently are still remarkable phenomena
if you think so, you might just wanna click here and read more about the beer lovin' women of detroit!
Post a Comment
Read more 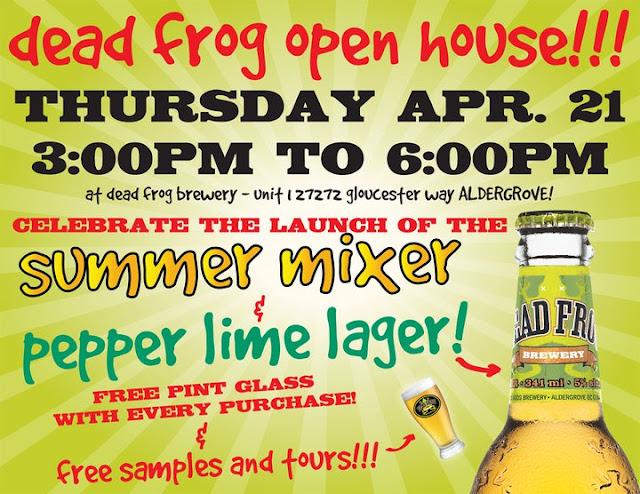 
alas i will be working while all the fun happens
someone please go enjoy a free sample for me!
Post a Comment
Read more 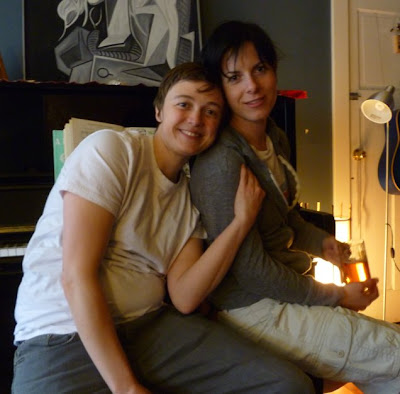