Showing posts from October, 2014
Show all

- October 30, 2014
if, for any reason, you'll be in the burlington, ontario area on november 7th you should go to this: we will rock you! the music of queen concert & craft beer tasting a live symphony orchestra playing queen songs craft beer tasting beforehand omg, sounds like a reeeaaallly great night! and only $38
Post a Comment
Read more

- October 29, 2014
here are my notes from yesterday's beer column on cbc radio's on the coast with stephen quinn: The BC Beer Awards on Saturday were a huge success as usual!   465 beers were entered by 63 breweries and judged, and 51 of those were declared winners – 3 in each of the 17 categories, plus 3 homebrews, a best in show and a challenge cask winner. No one brewery ran away with the awards.   In fact, of the 51 awards given out, 33 different breweries were represented in the winner’s circle.   And the fact that the best in show winner was a smoked porter from a brand new brewery says wonderful things about the state of beer in British Columbia .   Breweries big and small, new and established are all making really great beer.   This brings joy to my beer-loving heart!   And shows why BC won a whole third of the medals handed out at the Canadian Brewing Awards back in June – there is incredible depth in this Province of brewers brewing beer in all styles.   And they’re brewing good b
Post a Comment
Read more

- October 28, 2014
a very happy birthday today to my offspring! i loved you even before i met you and would want to know you even if we weren't related how lucky am i to be able to say that?! and just to make this post beer related: i love you more than beer! happy birthday!
Post a Comment
Read more

- October 27, 2014
brewdog's irreverent history of and ode to the growler vancouver tasting lounges - one man's odyssey of tasting: one afternoon of my life red collar brewing open in kamloops moody ales opens in port moody rebrandings for fernie brewing and lighthouse brewing five great oatmeal stouts a whole article about " should you drink beer or wine tonight " when the obvious answer is "yes" (for the record, i don't agree with most of the stuff in this article, i just wanted to link to it so i could be oh so funny in how i set up the link) the winners of the 2014 bc beer awards
1 comment
Read more

this one is a fundraiser too!   In celebration of  BC Craft Beer Month  and  National Fire Prevention Week, we created  Steamworks Heroica Red Ale .   For the month of October, every Steamworks brew sold will benefit the  BC Firefighters Charities  and the  BC Burn Fund.   It's your last 8 days to support your local heroes through Steamworks Heroica!   Find Heroica in 650mL bottles, on-tap and in growlers at Steamworks Brewpub or Steamworks Brewery & Taproom in Burnaby while quantities last.   "A tribute to the every day local heroes in our communities and lives."         Steamworks Heroica Night at the Brewery Contest
Post a Comment
Read more

if you missed out on pre-ordering the international beer advent calendar, don't feel too badly there are other options available! parallel 49 and central city brewing have teamed up to bring you a local beer advent calendar more info on that to come after i attend the launch at craft beer market next week and phillips brings back their snowcase: The Snowcase Calendar Count Down to Christmas with 24 different Phillips Beers   October 24th, 2014: The Snowcase Calendar is back!! 24 different Phillips beers in one case designed to help you count down to Christmas the best way possible: with beer!! Our elves have been hard at work and we're thrilled to be pairing this year's Snowcase with its very own website! www.snowcasecalendar.com has full details of the project and will
Post a Comment
Read more 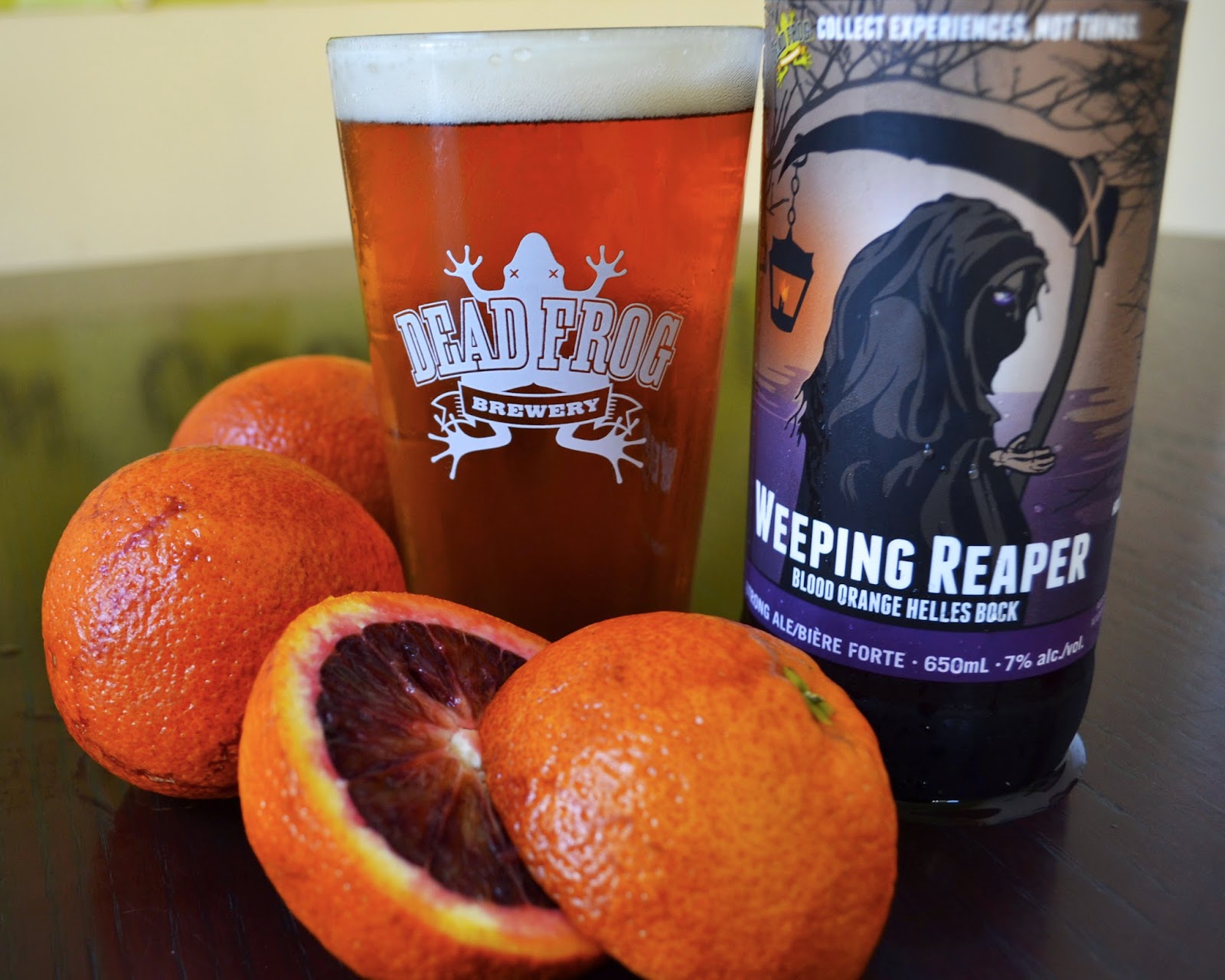 from dead frog, the weeping reaper blood orange helles bock which they so nicely provided me a sample of and it's good!  i really enjoyed this alternative to pumpkin beers, not just as an alternate but for it's own malty orange self! With the death of summer comes the celebration of autumn and the harvest, a traditional time to gather resources for the dormant winter months. It's also when the spirit world becomes more active. On All Hallows' Eve, ghosts disguised as beggars may come knocking at your door asking for food or money. Turn them away and you risk being cursed or haunted. A jack-o'-lantern placed at your door or in a window will ward off evil spirits. If you dress up as a ghoul, you may trick the Grim Reaper into thinking you are not of the living and avoid his harvesting your soul.   Our Weeping Reaper Blood Orange Helles Bock is a strong ale designed for the transition from summer to winter—stronger for the cooler nights, yet lighter bodied and
Post a Comment
Read more 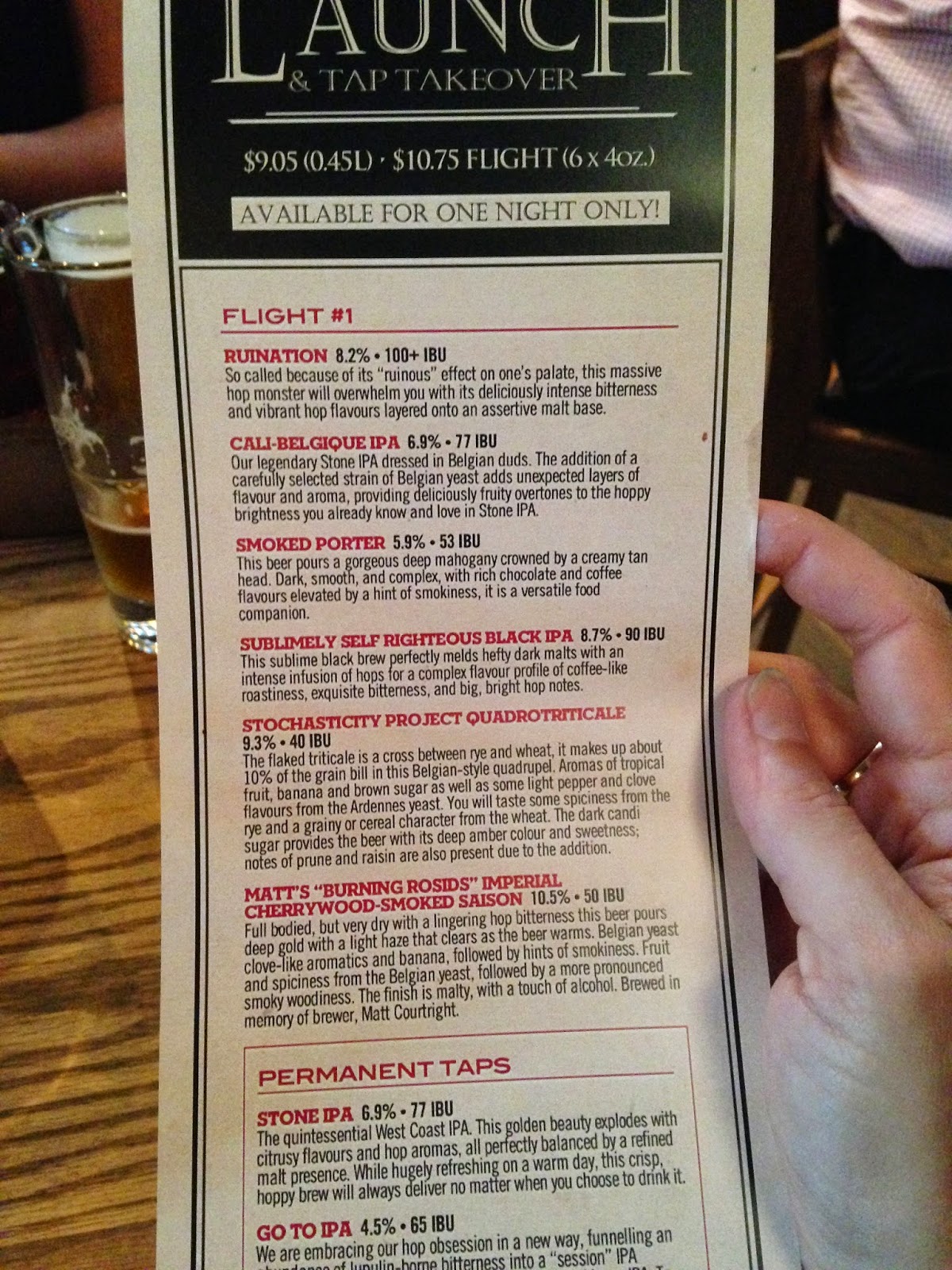 stone brewing is once again available in canada ! hooray! i attended the tap takeover launch at craft beer market on monday and i will be attending the tap takeover at stateside craft on friday unfortunately my life does have other things in it besides beer, so i am missing out on the collaboration brew day at bomber brewing (tuesday), the pairing dinner at blackbird (wednesday) and the biercraft beer dinner (thursday) half of the beer menu at craft beer market   paddle and a 0.45l pour in pretty branded glass
Post a Comment
Read more 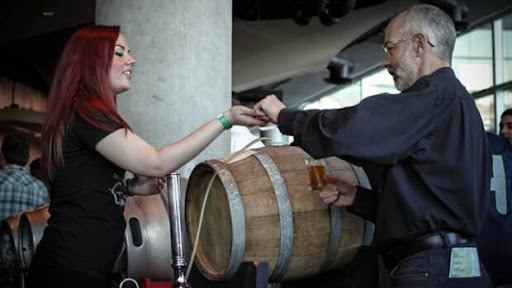 i will be doing a special appearance on cbc's on the coast tomorrow afternoon at 5:40 to take your calls and to help stephen quinn give away two tickets to the bc beer awards that include two of the beer classes as well as a guided tour of the tasting festival by none other than me, me, me! so get your beer questions ready and cross your fingers! 690 am 88.1 fm in vancouver and now, here's more from the cbc website that i didn't see at the time of publishing! What is a session beer? On the Coast's beer columnist Rebecca Whyman takes a closer look at the session beer By On the Coast, CBC News Posted: May 02, 2014 9:38 AM PT Last Updated: May 02, 2014 9:52 AM PT CAMRA's Spring Sessional Cask Festival will feature some of the best local breweries and their low-alcohol beers. (Central City Brewers and Distillers) What is a sessional beer? 6:55 On The Coast What is a sessional beer? 0:00 / 6:55
Post a Comment
Read more 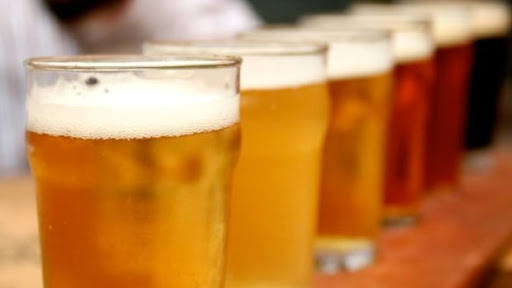 here is the podcast of my beer column last week talking and tasting pumpkin beers with stephen quinn and one from back in the summer with michelle eliot talking about crafty vs craft beers and from the website: Pumpkin beers flood the shelves for fall On the Coast's beer columnist has four picks to ring in the season By On The Coast, CBC News Posted: Oct 17, 2014 11:58 AM PT Last Updated: Oct 17, 2014 11:58 AM PT Beer columnist Rebecca Whyman says there's a lot of variety amongst pumpkin beers. (CBC)        Related Stories What is a session beer? How far are you willing to travel for a beer? Craft breweries have much to consider in selecting a name 5 summer beers you have to try   In the same way that some retailers have jumped the gun on Christmas and are now stocking egg nog in their coolers, pumpkin beers have been on the shelves of your beer store since the end of August. On The Coast 's
Post a Comment
Read more

- October 20, 2014
off the rail is almost ready ! some westender love for the donnelly group there's gonna be a new brewery in victoria town soon beer bribery, pay to play, whatever you call it, it is considered a pretty evil practice by most craft beer loving folks here are some wise words about the concept from half pints in winnipeg pretty things' twitter war from esquire.com from westcoaster blog this is hardly a new phenomenon, nor is is just happening in north america check out this 2010 article about chicago and this 2010 article about baltimore and this one from the uk does it happen in vancouver? i have no concrete proof that it does, but c'mon, why else would so many bars tie themselves to so many taps of crappy beer?  loyalty and swill-drinking clientele can only account for part of the phenomenon.  and frankly, brewery reps for a few local breweries have mentioned to me that they've been asked what they can offer an establishment or two around town - noth
Post a Comment
Read more

from cannery brewing   Cannery Brewing Company ART-isanal Series     Cannery has created a new line up of limited release beers; blending the enthusiasm of craft beer with the excitement of passionate artists and photographers. The beer in the bottle will be as unique and impressive as the art on the label.  Read more about the brewery.   L'ORAGE NOIR  (THE BLACK STORM)           Limited quantities, only available for Private Stores.   This "Abbey Style" Belgian Dark Strong Ale focuses on the unique flavours created by the teamwork of Belgian yeast and Candi sugar. A simple background of Pilsner, ESB, Special B, and Carfa malts bow to the shocking flavours of the yeast and sugar.      Style: Belgian Dark Strong Ale Alc./Vol: 9.0% 12 x 650ml
Post a Comment
Read more
More posts