- October 12, 2010
and now for something completely different
a polish beer!
zywiec - and i have no idea how to pronounce that!
its poland's #1 premium beer (according to the bottle)
it has a thermometer label
when you can see the name in colour, its the right temperature to drink
sounds a bit too much like those darned mountains that turn blue when the piss-poor mass market beer is cold enough to not give you any indication of its stinky nose
but i digress... 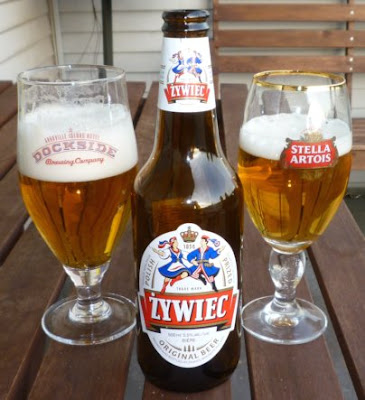 pours wonderfully clear
light caramel colour
nice head on the vigourous pour
5.5%
this is a lager i can get into!
crisp and mildly hopped
its everything a pilsner should be
and its delicious
a great session beer

on the bottle:  "since 1856 this premium beer has been brewed according to the original zywiec brewer's recipe from the best natural ingredients.  contains finest malted barley, choicest hops and pure mountain water."

no clue what the website says as its in polish
but wikipedia has this little history lesson:  Żywiec Brewery is a brewery founded in 1852. It was nationalised after the Second World War. Grupa Zywiec S.A. consists of five main breweries: Żywiec Brewery,Elbrewery, Leżajsk, Warka Brewery and Cieszyn Brewery, and is majority owned by the Dutch Heineken Group (Heineken International Beheer B.V.) with a 61% shareholding. The brewery has capacity of 5 million hl a year, making it the largest brewery in Grupa Zywiec.


and quotes a beer advocate review:  "Żywiec Pilsner beer is a light pilsner beer that is 5.6% ABV. It is made as naturally as possible using Poland’s mountain spring water. The taste is quite unique, yet simple.  Żywiec pours with a pale yellow color with a good sized head leaving a lace behind and is very clear. Streams of carbonation rise from the bottom of the glass to the top.  Its aroma consists of clover, honey, hops and malt, backed by a spicy noble hop, and finishes with just a note of sweetness. While drinking, the “mouth feel” is thin and lightly carbonated, crisp while medium-light bodied.  The taste is lightly hopped (Saaz detected) and a balance of maltiness. There is some light crispness in the middle, and finishes with the sweetness increasing exponentially and leaves quite a fruity trace behind it along with a trace of alcohol. Clean, crisp and a fairly narrow flavor profile as would come from a good Lager."
beer beer advocate pilsner poland zywiec