- October 26, 2010
and the final installment in my foray into lagunitas ipas,  the hop stoopid!

practically jumped out of the bottle
huge head on the vigourous pour
very pale in the glass, and a little cloudy
enormous hop nose
102 ibus
big hop flavour
that keeps on giving 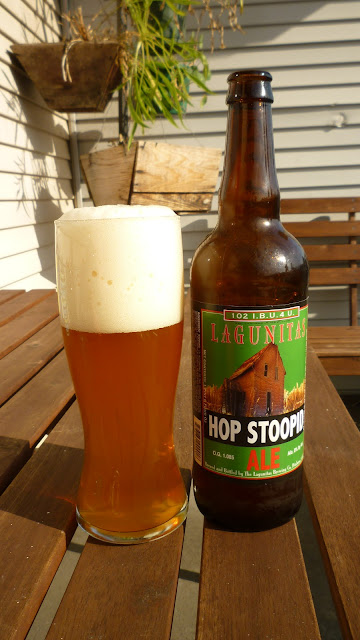 102 ibus
think that's enough for you?
it sure works for me!
i'd drink it again! 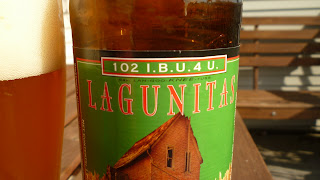 on the bottle:  ""give it to mikey... he'll drink anything..!"  up the bomber went in toast, then to his lips, and what happened next could not have been foreseen.  hop stoopid, a slick re-animator green fluid oozed from the bottle.  when it crossed his teeth and came in contact with the bitterness flavor receptors on his tongue, his eyes rolled back in his head, he did a sort of death ratter, a cloud crossed the sun, and all his hair fell out.  a spot on the side of his cheek blistered and a little bit of juice squirted out laterally starting a small fire.  the rest of his head did the indiana jones melting nazi thing, and as his head drained down his shirt and into the open stump of his esophagus.  a little whistling noise came from his navel, which burst open and onto his pals, one in the forehead and the other in the eye.  finally, the carcass slumped forward in a gelatinous mess, caught fire, and burned for three weeks.  let's talk.  call us @ 707-769-4495!  cheers!"

from the website:  Hop Stoopid Ale
For those mornings when you have to cut right to the chase, this is the one. Sure to blast through just about anything still lingering from the night before, this mouthful of Hops and huge rich Malt has a gaurantee built right into the name! 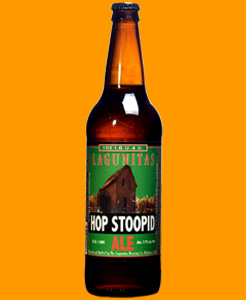