i wanted to try the crannog ales 10th anniversary fresh-hopped ipa, but they were out of it... 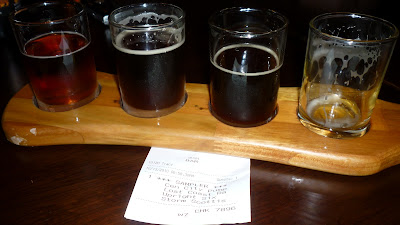 bottles:
cannery brewing wildfire ipa:  6%  intensely dark and smooth.  this balck ipa has complex hops that rage through to the finish
phillips brewing grow-hop:  5%  newly plucked chinook hops are added rather than dry hops, resulting not only in hoppy bitterness, but also strong melon flavours 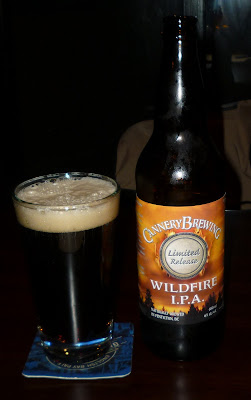 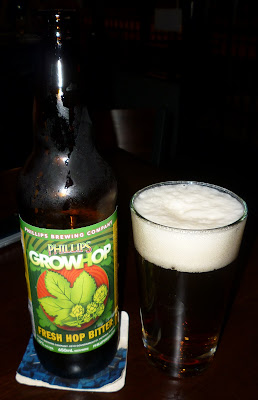 the pumpkin:  i don't love a pumpkin ale, but this one is closest to what i would be happy to drink!  crisp, spicy, squashy... its a keeper!
the raspberry:  its like fruit juice, not beer... quite carbonated and sweet.  too much berry at first, then followed by too much chocolate - its overwhelming!  it doesn't taste like beer dammit!  so, i'm not a fan...
the six:  a little too fruity for me.  yes its dark... but there may be too many flavours going on here.  rather than tart i found it very sweet malty.  and i want to know where that hop bite is.
the cream ale:  smells like root beer, tastes like root beer.  interesting and fun, i like it, but not for a whole pint-full and definitely not for a session
so, glad i tried them all, but probably not gonna have any of them again...

the bottles though, the bottles are a whole 'nother story!  why, oh, why are they limited releases?
it is kind of cheating though, to go with two ipas
odds are pretty good that i'm gonna like them!

wildfire ipa:  delicious, a brilliant black ipa.  to me, this is what a black ipa should taste like.  definitely a hit out of the park!  i could drink this all night long!

grow-hop:  very aromatic, delightfully hoppy without the intense bitterness.  i don't particularly like melon, so i'm glad i wasn't detecting the melon flavours.  all i got was delicious.  i could drink this all night long too!

gotta get me some more of both of them while they're still available...
you know, right after i get that job to pay for more beer!
beer cannery brewing central city brewing grow-hop lost coast brewery phillips brewing pumpkin ale raspberry scottish ale st. augustine's storm brewing upright brewing wildfire ipa