wonderfully dark and malty
pours with an insanely huge head on the vigourous pour
wafts malty aroma
but has a lovely hop bitterness about it
6.5%
30 ibus 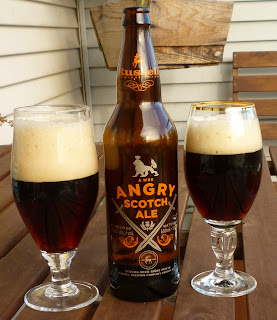 from the bottle:  "a wee angry scotch ale is part of the russell brewmaster series: a succession of small batch beers that push taste boundaries and explore new styles of beers.  this beer has been brewed with a blend of scottish specialty malts in the style of a 19th century 90 shilling scotch ale - a strong, dark ale with a dominant malt accent that originated in edinburugh.  this batch of beer was brewed by jack bensley, eric dubuc and anders mckinnon, russell brewing company, 2010.  russell brewing company has been brewing premium craft beer in british columbia since 1995.  our beer is 100% natural and has no preservatives.  we don't pasteurize which means that we don't kill the taste - you drink it the way it is brewed.  fanatical about beer, we believe that the passion and quality that goes into creating russell beer comes through in the taste.  enjoy!"

such a great beer when i still want my hops, but i want some malt to go with them
and drinking a dark beer just feels right when the weather gets cooler
not that i'll ever abandon my ipas
just that sometimes i feel like a nice dark ale
an angry scotch ale! 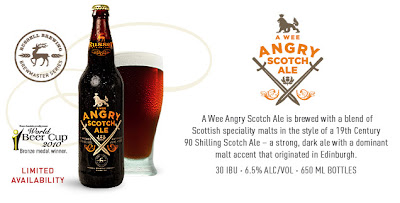