provided to me by alison
but actually from the huffington post

Though the Germans would like us to believe otherwise, beer has long been made with ingredients other than barley, hops, and water. Of course, there's a reason 16th-century German brewers were kept to such a strict recipe regimen—you can add a lot of nasty stuff to beer to make it more potent, to make it last longer, or to stretch ingredients. These days, though, brewers usually add extras to improve their beer, not degrade it: coffee, pumpkin, tea, spices; there's beer made with chilis, beer made with hemp, beer made with beet sugar (called, cleverly, the Kerouac), and even, according to a Seattle performance artist, beer made with her own ... well, yeah. 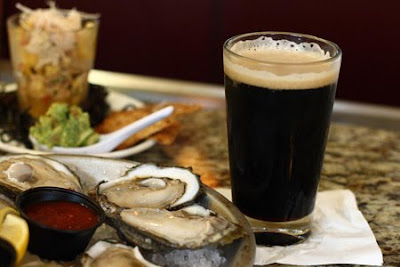 With that in mind, is oyster beer really all that weird? Although it's a bit early to call it a trend, at least three bottled oyster stouts have hit the U.S. market in the last year or so: Porterhouse Brewing Co.'s Oyster Stout, Harpoon's Island Creek, and Flying Fish's Exit 1. The Harpoon and Flying Fish are American, while the Porterhouse comes from Dublin. (And they're not the first—a quick search on Beer Advocate found about a dozen other draft-only and limited-distribution oyster stouts over the recent years.)

Oyster stouts are exactly what they sound like: brewers shuck in five or six bivalves per barrel during the brewing process. By the time the beer is done, the oysters have completely dissolved, leaving behind just the faintest hint of salinity. Beware, though: Some brewers, like Marston's, don't actually use oysters in their oyster stouts; the name is simply to suggest an appropriate accompaniment. Still others, like Massachusetts's Cape Ann Brewing, will use shells, but not the oysters themselves, to balance the mineral content of their water.

I recently tried the Harpoon, Flying Fish, and Porterhouse. Sadly, the hardest one to find is the only one I thought worth drinking. New Jersey's Flying Fish, which has quickly become one of my favorite breweries, distributes only within the state and eastern Pennsylvania, along with limited distribution in Delaware, Maryland, and D.C. Which is a shame, because it's building a solid reputation in the beer world, particularly with its limited-release Exit Series. In a clever inversion of the stereotype of New Jersey as a place with no "there" there, the brewery is developing a beer for each exit on the Jersey Turnpike, each incorporating an ingredient associated with the area near the exit. Exit 6 Wallonian Rye uses locally grown rye; Exit 16 Wild Rice Double IPA uses local rice. And Exit 1, just north of the Delaware Bridge, uses oysters harvested from the Delaware Bay.

And about that beer: While the Harpoon and Porterhouse are both dry, even astringent, Irish stouts, the Flying Fish is a creamy British export stout, with about twice the alcohol content of the other two. Its milk chocolate and roasted flavors are much better complements to the subtle saltiness of the oysters than the bitter chocolate and tobacco flavors I got from the Porterhouse and Harpoon. I found the Porterhouse thin and excessively briny, while the Harpoon was bland with a finish of old coffee grounds. Neither was particularly bad, but neither was anything I'll look for again.

The Flying Fish stout, on the other hand, deserves to be shared widely. It's a real crowd-pleaser, the brewer's equivalent of a jammy Cabernet. From its thick, mocha-tinted head to its round and heavy mouthfeel down through the milky-sweet flavor and tinge of salt—not brine, but salt—to the modest vanilla on the finish, it's a beer with something for everyone. Everyone, that is, who can make it to southwestern New Jersey. "