holy malty first sip!
gotta love the cascading action on the pour though
not a finer sight in the world!
don't get me wrong, i like lots of other sights too, but none are finer

the bottle says:  "big hop flavours complement this rich dark ale in this ultimate example of fusion between some of our favourite styles of beer!"
6.5%

now, before anyone informs me that the black toque has been discontinued and is now the skookum cascadian brown ale, let me just say that this bottle has been at my house for about a year now
and i have been remiss in drinking it in a timely fashion
but i gotta tell you, i liked it better when it was black toque and called an india dark ale
i am assured its the same beer in the bottle
and what's in a name, a rose is a rose by any other name and all that
but i can't help having a preference, okay?

"Previously known as Black Toque: our Black Toque India Dark Ale has undergone a bit of a facelift and will now be known as Skookum Cascadian Brown Ale. The bottles will contain the same deliciously dark flavour you've grown to love, just with a brand new coat of paint."

so, before the beer goes totally off from being insanely old, i figured i had better get with the new and drink up the old!
oh nostalgia! 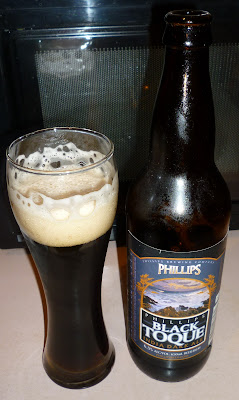 i'm not finding it terribly hoppy
maybe i remember it as being hoppier
or maybe i'm just such a hop fanatic these days that my hop-o-meter is a bit off
but really, its so much maltier and chocolatier than it is hoppy
still a delicious brew, don't get me wrong, i just want a bit hoppier...
like that's news to anyone...
black toque cascadian brown ale india dark ale phillips brewing skookum