- October 29, 2010
blech, do i ever not like samuel smith's india ale
top fermented in stone yorkshire squares
(must be that top fermenting yeast that's getting to me)
couldn't get past the second sip
thank dog bridget likes it and was willing to finish the other 500mls

on the bottle:  "in the 19th century there was a considerable trade in ale from britain to india.  the land of spice was britain's major export market.  the heavy hop levels of these pale ales shipped on the long voyage to india naturally preserved the ale and complemented the flavourful and exotic cuisine of the east.  samuel smith's india ale is characterised by the colour of a golden sunset, a refined maltiness and an emphasis on the aroma and flavour from britain's best hop gardens." 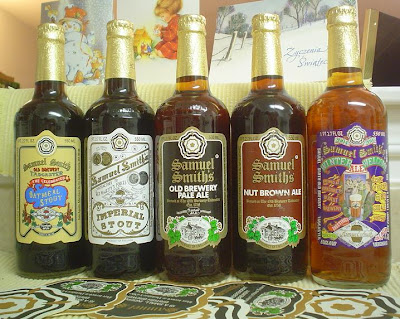 tried it again at firefly on tuesday
still don't love it, but it did go down better than the other night...
it really has a belgiany nose to it and i think i just can't get past that
poor belgians, i'm so bigoted against them...
india ale samuel smith top fermented