- October 27, 2010
i had been to uva on seymour street a couple of times shortly after bit opened with my foodie wine drinking friends, but must admit i hadn't been there recently until friday night
we were on granville street after an early show at venue, just as the canucks game let out
we wanted another drink before calling it a night
but weren't looking to get swept up in the post-hockey mayhem
uva seemed a solid choice
i recalled the tapas were tasty, and reasonably priced for such a fancy place
i loved their sunday evening tapas and champagne deals in particular...
anyway, we had yummy tapas (the risotto balls are especially good for the soul)
and i was impressed by their beer list!

the beer list is about half belgians
then lots of the usual classier imports
and there, right at the bottom, are two lost coast choices!
i recalled having the indica ipa at st. augustine's from a keg, and liking it
so figured i'd probably like it in a bottle too
and i did!! 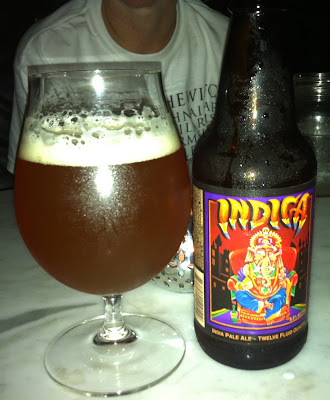 however... i am troubled to learn that originally the label had an illustration of lord ganesha on it that upset the hindu community.  apparently bowing to the pressure, i have found several accounts that state lost coast removed the image of ganesha from the label back in 2009
(for example, from beergoddess:  "A cartoonesque image of Lord Ganesh is on the bottle. Ganesh or Ganapati (translated as the King of sets) is the elephant headed son of Lord Shiva and is widely worshipped by the Hindus.  Owing to stringent protests, the company has removed the image of Lord Ganesha from the beer bottle and its website and extended apology, in July of 2009."


however, they didn't remove it so much as change it to be a less authentic representation of the indian god.
from complaints board comes this explanation, allegedly from one of the owners of lost coast:


"I have answered this question numerous times over the past few years dating back to around 2005. Each and every answer is independently created with zero replication. I do this in order to costume tailor the responses to the situation and question. This allows me to have absolute context into the question and demonstrate consideration towards resolve.

When the brewery created the art work and attained all government approvals, our intent was solely to create mindset around the image of the country of India as that is where of course the India Pale Ale initiated from. Use of the Ganesha was never intended to mock any religion but to draw recognition factor from an icon to the Indian country.

However somewhere around five years ago there was a groundswell of concern from the Hindu community which nearly triggered a lawsuit. Even though no state or federal court would hear the case (bases mostly on the freedom of expression doctrine) we (the owner group and myself) felt that it was in everyone's best interest that we strike a compromise, resolving to minimize the "visual" marketing elements of the graphics associated with this package in question.

This "compromise" being the goal; objectives were set in place. The first and foremost objective was the elimination of all media-driven images of the Indica art especially associated with our web site store. We discounted the image-projection and associated marketing of the Indica brand's merchandise (shirts, posters, etc) as a means of icon distribution reduction and image transmission.

The second objective was to change some subtle elements of the artwork itself so that the image was less iconic towards that of Genesha's image. We did this by eliminating two arms and the tattoo-mark on the forehead.

This brewery and myself felt that we acted in good-faith and responsible to the interests of the Hindu community as well as the fans and business partners associated with the Indica IPA branded product. Your concerns and comments have not fallen on deaf ears. We as a brewery have and will continue to act in good faith towards all communities' needs and interests.

Please feel welcome to comment back. I do appreciate hearing from you.