- October 21, 2010
yup, i still adore the howe sound brews!
even more so now that they did a shout out to my blog on their facebook page
but it will not affect my impartiality
well, not much anyway!

6%
68 ibus
14.2 degrees plato
pours up with a big head on the vigourous pour
almost orange in colour
(just like its label - hmmm, another ipa that uses orange for its label)
slightly hoppy nose
very hoppy first sip
and second, and third! 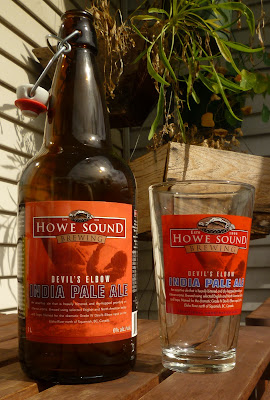 the bottle says:  "an assertive ale that is heavily bittered and dry-hopped providing an intense aroma.  brewed using selected english and north american barley and hops.  named for the dramatic grade iv devil's elbow rapid on the elaho river north of squamish, bc, canada."

"in 1980, bc's john mitchell and frank appleton pioneered north america's first modern craft brewery at horseshoe bay on bc's spectacular howe sound, beginning what has become known as the craft brewing renaissance.  in 1996, john mitchell helped design the howe sound brewery and worked as our first brewer developing our initial recipes.  known as the 'grandfather of microbrewing in canada', we are proud of his ongoing relationship with our brewery.  today, we continue to brew in the craft style, using unfiltered 100% barley mash.  we pride ourselves in brewing a diverse selection of flavourful, well-balanced ales. we invite you to enjoy the experience."

"our bottle:  this re-closable bottle, known as a 'pot-stopper', was widely used in europe and north america prior to the 1950s.  our new combination cap is an innovative design that allows closure by both crown and swing caps.  it can be reused and meets our green packaging objectives.  please visit www.combi-cap.com for more information."

and have i extolled the vitrues of their website yet?
so comprehensive and user-friendly
much love!
beer british columbia devil's elbow hops howe sound brewery ipa pot-stopper squamish