- October 17, 2010
i enjoyed camra's harvest fest at the railway club yesterday!
good times and good beers
there was a fabulous selection of harvesty, fally beers!

this is the list from the camra website, but it doesn't seem to be the exact list of what was actually available... i didn't see the central city beers there, and there was also a chipotle ale available:

Harvest Festival Beer Selections:
i began with the wet hopped esb
fabulously hoppy and well-balanced - very much a pleaser to me
surprisingly, as this was a granville island brew, i was very happy with it
love me the fresh wet hops
had seconds of this one later in the afternoon 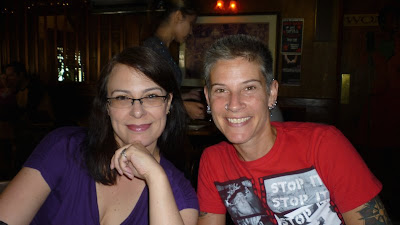 next up for me was the chipotle ale, which i don't see on camra's list, so i couldn't tell you now, 24 hours later, who it was by
similar to rogue's chipotle ale, but less spicy on the tongue
however, it was waaaay spicier on the way down
i had hot pepper sensation in my throat for a long time after finishing my taster
not that i'm complaining though, just pointing it out!
i do love me a spicy, smoky pepper
so i had a second glass later in the afternoon
(notice the theme yet?) 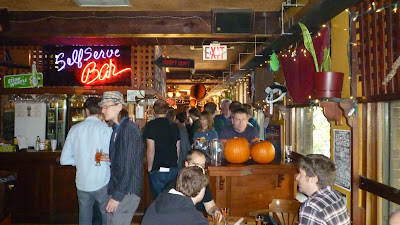 i followed up with the echinacea stout by storm
kinda like jagermeister, but in beer format!
not exactly medicinal tasting, but definitely came across as herbally
i quite enjoyed it, and had a second glass later in the afternoon
i don't think i could have sessioned with this beer, but two small tasters of it interspersed with other delicious brews was fabulous

i normally don't like a scotch barrel aged beer as they taste too scotchy for me, but after both bridget and donna assured me that russell's spicetastic scotch ale didn't taste of scotch, i decided i had better try it
and i think it was my favourite of the afternoon!
yay for trying new things!
perfectly spiced, deliciously aged, this is one fine beer
it has all the right notes a pumpkin ale should hit, without the pumpkin pie aspect
i'd choose this as my harvest season beer over a pumpkin ale in a heartbeat
i of course had to have a second glass later in the afternoon 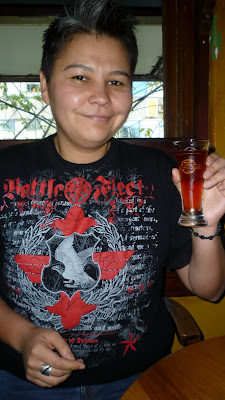 the howe sound imperial pumkineater finally got tapped at around 2:00
to loud cheers and a long line-up
i got me a glass
and for a pumpkin ale, it was quite delightful
nicely spiced, not too sweet, but definitely pumpkiny
no second glass of this one for me though
i'm just not much of a pumpkin ale fan...

even though i had it just the other night, i had a glass of phillips' grow hop because its a limited release dammit!
poured from a bottle, not a keg or cask
but still quite a delicious fresh hopped ipa
quite to my liking
but surprisingly enough, i preferred the gib esb
so no second glass of this one either 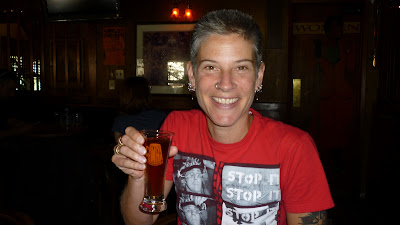 i skipped the rest of the pumpkin ales as i'm just not a fan of the style
i also skipped the r&b mushroom beer as i have a major hate on for all fungus-kind
and i am assured that you really could taste the mushroom in the beer
bridget and donna quite liked it
very cloudy and pale in the glass, they say it has quite a mushroom risotto aftertaste

i felt like there was a great assortment of beers to choose from
the food looked good, especially the pumpkin pie
the crowd was convivial
i think camra rocked the first ever harvest festival and i hope it returns next year!
camra chipotle granville island brewing harvest festival howe sound brewery mushroom phillips brewing pumpkin ale r and b brewing railway club russell brewing storm brewing vancouver