- August 03, 2016
what i had to say a couple of weeks ago about the craft beer scene in onterrible vs. british columbia
(or more accurately hamilton/toronto vs. vancouver)
for the rest of my column, see below the cbc website piece

Ontario's craft beer scene has
grown up over the years,
columnist says

Plus, check out Rebecca Whyman's picks for this week 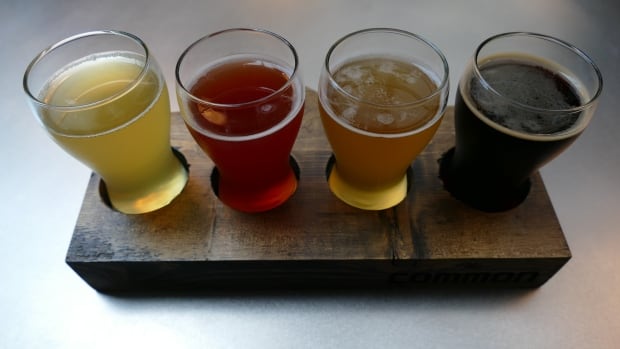 On The coast beer columnist Rebecca Whyman says there's been a lot of improvement — especially when it comes to variety — in Ontario's craft beer scene. (Jaison Empson/CBC)

On The Coast beer columnist Rebecca Whyman usually keeps things local, but this week, she is highlighting that most exotic and mysterious of beer destinations: Ontario.
Well, maybe Ontario isn't that exotic or mysterious, but Whyman told On The Coast guest host Gloria Macarenko it has a lot to offer.
"It used to be that I didn't look forward to trips to Ontario because there just wasn't as much craft beer to choose from as I can find in Vancouver. Which is strange, as there are more craft breweries in Ontario than there are in British Columbia," she said.
"I found most of the beer to be lagers and malty pale ales. Good beers, definitely, but there didn't seem to be as much experimentation going on. It felt to me like Ontario was way behind the West Coast in its craft beer revolution."
But on this trip, Whyman says craft brewers are embracing hoppier beers in a big way and also brewing a better variety.
But since you're probably not reading this from Ontario, Whyman kept her beer picks B.C. focused.
Powell Street Brewing's Simcoe Sour
"This is the fourth instalment in their series of kettle sours. It is dry-hopped with Simcoe hops to give it a whole lot of citrus and pine aromas. Very tart and refreshing! Six percent alcohol, available in 650 ml bottles at the tasting room and liquor stores, and on tap at the tasting room."
Main Street Brewing's Naked Fox IPA
"Tropical hop flavour with a piney finish. Nicely balanced malts and hops. It is a deceptive 6.8 percent so be careful with this one! Available in 650 ml bombers at the tasting room and liquor stores. Sometimes you can also find a cask version at the tasting room alongside the regular version."
Central City's Sour Kriek II
"Following up on the success of its Sour Brown I, this is a Belgian-style sour red ale, infused with cherries and aged for two years in Cabernet Sauvignon oak barrels and French oak foeders. Lots of cherry and oak notes in this tart beer. 10.8 percent alcohol, available in 750 ml bottles at private liquor stores."
With files from CBC Radio One's On The Coast

It used to be that I didn’t look forward to trips to Ontario because there just wasn’t as much craft beer to choose from as I can find in Vancouver.  Which is strange, as there are more craft breweries in Ontario than there are in British Columbia.  I found most of the beer to be lagers and malty pale ales – good beers, definitely, but there didn’t seem to be as much experimentation going on.  It felt to me like Ontario was way behind the West Coast in its craft beer revolution… The stereotypes of Ontario being more conservative than BC and favouring German and Eastern American influences, while BC is more eccentric and influenced by the US West Coast and local ingredients, were holding true for me.

But luckily I no longer worry about whether I’ll find craft beer that excites me here, because I do.  Suddenly, it seemed like Ontario brewers fell in love with hops the same way West Coast brewers had.  And sour ales too.  Now you can readily find single hopped beers, hop-forward beers, kettle sours, and golden ales – a vast variety of styles is available.

Now, before anyone gets their nose out of joint, I am mostly talking here about beers that were available at the liquor store.  And the system of beer selling in Ontario is quite different from that in BC.  In Ontario most of the retail beer sold in through the Beer Store, a monopoly owned by Anheuser Busch In-Bev, MolsonCoors and Sapporo - big beer, not craft beer.  The Crown Corporation LCBO handles the rest.  So it’s not terribly surprising that it isn’t as easy to find craft beer on retail shelves.

Visiting breweries or brewpubs is a much better way to gauge the beers available than relying on liquor store shelves, or bar menus.  But if you’re not actually on a beercation sometimes the liquor store or a bar is the place you’re finding beer.  If only there could always be a Main Street or an East Van in your path!

When I was fortunate enough to visit a few breweries I was much more impressed by the beers I tried there.  Anyway, I guess I’m saying that the more beer I drink in Ontario, the more really fabulous craft beer I’m coming across, and it makes me very happy!
The history of craft beer in Ontario is similar to that in BC.  It all begins the same way.  Independent brewers going out of business during prohibition and the world wars.  Followed by consolidation of the remaining breweries and mass production of fizzy yellow lager ensuing.  In the 80’s, much as BC had John Mitchell, Ontario had Jim Brickman to pioneer the resurgence of independent breweries.  And then in the early 2000’s they hit critical mass and began the Ontario Craft Brewers Association.  With almost 200 craft breweries in existence and another 75 in the works, that craft beer fad seems to have staying power!

You can find some BC craft beers in Ontario.  Some of the bigger craft breweries like Central City, Tree, Phillips, Driftwood and Parallel 49 distribute to Ontario.  Their tall cans are particularly popular.  I think that the beers BC has exported are a good sample set of what BC has to offer.  But much as I like those beers and I’m happy to see them available here, I want to drink something new when I’m away from Vancouver.

Some of my favourite local beers are:
Beau’s Brewing in Vankleek Hill (outside Ottawa) – who just sold their 10 year old brewery to their employees.  Their beers are all organic.

Collective Arts brewing – who along with Nickelbrook Brewing bought the old Lakeport Brewery in Hamilton and have launched a new enterprise called Arts & Sciences which sees both breweries brewing out of the space, hosting special events like concerts, and a weekend beer garden in the summer.  Collective Arts has a really lovely session ipa, the State of Mind, that I’m loving.

Bellwoods Brewing in Toronto have a very familiar feeling brewpub – you could be at a tasting room in Vancouver, I swear!  And a beer list that includes hoppy and sour, farmhouse and imperial stouts.

Muskoka Brewing has a great line up of beers, from the Mad Tom IPA to Kirby’s Kolsch to a kettle sour and both winterweiss and summerweiss beers.

If you’re going to Ontario, there is also a free craft beer finder app for your phone, called Ontario Craft Beer Finder.

Alas there are very few Ontario beers available at liquor stores in BC.  Steamwhistle pilsner and the Mill Street beers are readily available – although Mill Street has been bought out by Labatt’s, who are owned in turn by AB-InBev, so it’s not craft beer any more.  Other than those, I haven’t been able to find any Ontario beers readily available at liquor stores in BC, private or government.  But I understand that Beau’s will be coming to BC soon!  So keep your eyes peeled for that.  And Central City recently did a collaboration brew with Great Lakes Brewing, that is available in BC.  The peared up saison is a single hopped saison brwed with Jarrylo hops and real pear juice.
beer cask cbc website central city brewing craft brewed gloria macarenko ipa kettle sour kriek main street brewery on the coast ontario powell street simcoe sour vancouver