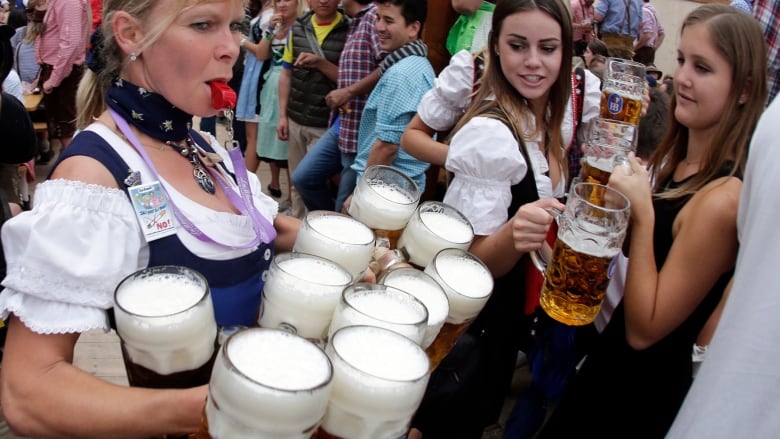 We're a long way from Oktoberfest (Munich edition pictured), but there will be plenty of beer events in B.C. over the next several months. (Matthias Schrader/Associated Press)
Beer festival season is starting soon, and On The Coast beer columnist Rebecca Whyman says the number of options keep growing.
There's no official festival season, but Whyman says most take place between April and October — and as that time approaches, she has some "pro tips" for getting the most out of your festival experience.
But with festival season still a few weeks away, here are some beer picks in the meantime:
American Farmhouse IPA
"A collaboration between Powell Brewing and Four Winds Brewing. It is a hybrid style where a traditional Belgian farmhouse ale meets an North American East Coast IPA.  6.8 percent, available in 650 ml bottles from the breweries and select private liquor stores."
Strange Fellows Goldilocks Belgian Golden Strong Ale
"Light and fruity with notes of coriander and orange peel.  It is a strong beer — 8.5 percent — that goes down really smoothly. Available in 750 ml bottles at the brewery and select private liquor stores."
R&B's Shake Your Fruity
"This is a milkshake IPA: those overnight success, fruity-tasting beers brewed with lactose, which makes them thick and hazy. Even people who claim they don't like India Pale Ales like a milkshake IPA! This one is brewed with oats and apple puree as well, for ultimate smoothness. But what you'll taste is juicy orange and pineapple. 7.3 percent, available in 650 ml bottles at the brewery and select liquor stores."
With files from CBC Radio One's On The Coast
beer beer festival cbc website craft brewed on the coast pretzel rebecca whyman