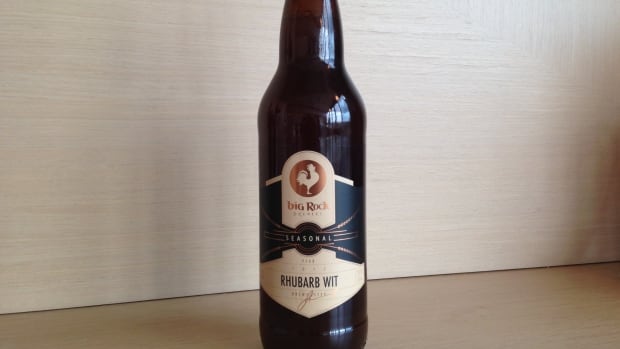 Rebecca Whyman also stopped by to taste some Rhubarb Wit from Big Rock Brewery. She described it as "a classic witbier aged with rhubarb to lend a hint of tartness to subtle notes of orange peel and spice. Unfiltered and delicate." (Rebecca Whyman)

(Note: CBC does not endorse and is not responsible for the content of external links.)

Fall is coming, and that means fall beers are coming too — and even better, so are some awesome fall beer festivals.

On The Coast beer columnist Rebecca Whyman has some picks for great B.C. beer events during the next few months, and she shared those with host Stephen Quinn — although he was already well acquainted with one event, the Great Canadian Beer Festival in Victoria, which he attended.

"This festival is always a well-organized two days of beer tasting.  And for me it's often my only opportunity to try beers from newer breweries from far-flung corners of the province, like Wheelhouse Brewing in Prince Rupert, Category 12 from Saanich, and Cumberland Brewing," Whyman said.

"A couple of stand-outs for me were the spruce tip IPA from Wheelhouse, and their collaboration white IPA with Yellow Dog."
Here are some more picks for great beer events in B.C. events this fall followed by Whyman's comments:

Whistler Village Beer Festival: September 16–20 at Whistler Olympic Plaza in Whistler
"I look forward to trying beers from newer breweries in the province — there will be over 200 beers from 80 breweries, so I'm not at all worried about hitting that goal!"

Hopped: September 26 at Yaletown Brewpub in Vancouver
"Hopped is an IPA challenge cask festival at Yaletown Brewpub. All the entries are casks made with any or all of five hop varietals provided by the lovely folks at HopsConnect. If you love hops, you'll love this event!"

HarvestHaus: October 1–11 at Queen Elizabeth Plaza in Vancouver
"It's a Bavarian beer and food festival. Eat pretzels and schnitzel while you drink European beers and listen to traditional Oktoberfest music. Partial proceeds will be donated to Sole Food."

Craft Year Craft Beer: October 22 at VanDusen Gardens in Vancouver
"This is a celebration of the handmade and the artisanal. Alongside beer tastings and food, there will also be a silent auction of hand-crafted beer related items in support of the Craft Council of BC and VanDusen Botanical Garden."

BC Beer Awards: October 24 at the Croatian Cultural Centre in Vancouver
"And finally, there's the BC Beer Awards, which you will be hosting again this year, Stephen! The BC Beer Awards is more than an awards ceremony. There's a beer tasting festival and a brewer's challenge, as well as the beer awards and the homebrew award. The Brewer's Challenge this year is to brew a sour cask — which of course I am very much looking forward to!"
bc beer awards beer festival big rock brewing category 12 cbc website craft year craft beer harvesthaus hop fest stephen quinn wheelhouse brewing whistler village beer festival yaletown brew pub