The book describes and rates more than 100 unusual beers from around the world. It’s the perfect gift for the craft-beer lover. 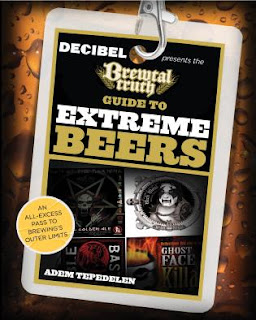 About The Brewtal Truth Guide to Extreme Beers:
‘A hugely entertaining read’ – The Vancouver Province

The Brewtal Truth Guide to Extreme Beers describes and rates more than 100 unusual beers from around the world and draws parallels to the music scene, with profiles on craft-beer-loving metal musicians and extreme craft beer brewers.

‘Brewers these days are taking beer to extremes, and Tepedelen is just the writer to introduce drinkers to severe suds.’ – Minneapolis Star Tribune

‘A journey through beer that treads a narrow path between creativity and craziness.’ – The Vancouver Province

About author Adem Tepedelen:
Internationally recognized as an expert on the fast-growing craft beer movement, Adem Tepedelen is a winner of the prestigious Michael Jackson Beer Journalism award, which celebrates excellence in reporting on American craft beer. He is author of The Brewtal Truth Guide to Extreme Beers and co-author of Island Wineries of British Columbia, named best wine book in Canada (and third best in the world) by the 2011 Gourmand Awards. Tepedelen is the Brewtal Truth beer columnist for Decibel Magazine, the Divine Drinks columnist for YAM Magazine and a contributor to other publications across North America, including Fine Cooking, Imbibe and Northwest Palate. Also a highly respected music writer, he has written for dozens of music magazines and websites including Mojo and Rolling Stone.
adem tepedelen beer book brewtal truth craft brewed extreme beers gift music vancouver