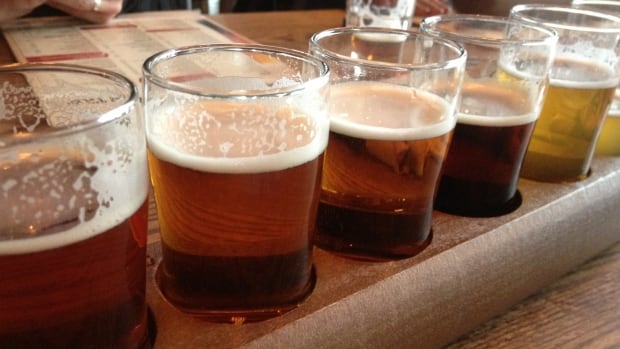 A flight of B.C. craft beers at Craft Beer Market in Vancouver's Olympic Village. If you thought B.C. had a lot of craft beers before, 2016 could bring even more players into the market. (CK Golf Solutions/Flickr)

If you thought B.C. has already hit "peak craft beer," 2016 begs to differ.
According to On The Coast beer columnist Rebecca Whyman, about 15 to 20 new craft breweries are going to open in the coming year, bringing the estimated number of craft brewers up to about 130.
And it won't be limited to just Vancouver: New craft breweries are set to open in places like Abbotsford, Kelowna, Squamish, Nelson, Port Alberni, Golden and Chemainus.
"There's always talk about when this growth will have to stop, but I don't think that will be any time soon," Whyman told On The Coast host Stephen Quinn.
"Breweries that opened in 2015 are already winning awards, so we're still looking at quality beers taking their place alongside the more established award-winning breweries. Secondly … tasting rooms are all full, and breweries are having trouble keeping up with demand.  So the thirst for craft beer continues to outpace brewery openings."
Whyman also believes that because of a combination of factors like habit, living in an area without a craft brewery and price points, a lot of people still don't drink craft beer, and that presents an opportunity for craft brewers.
"Craft brewers would do well to figure out ways to woo these people over to the craft side," Whyman said. "Some more rural breweries are doing this by brewing lager styles familiar to macro beer drinkers. It's about knowing your community."
With the weather turning cold and wet for most places in B.C., Whyman has a few picks for "winter warmer" beers this week.
Bomber Brewing Old Fat Heater Winter Ale
"Eight per cent of malty goodness with notes of caramel, dates and figs, available in 650 mililitre bottles and at the tasting room."
Howe Sound Brewing MegaDestroyer Licorice Stout
"If you like black licorice, then this imperial stout is sure to please you.  But watch out, it's 10 per cent and comes in a one-litre bottle. Definitely share with friends!"
Moon Under Water's Dark Side of the Moon Oatmeal Session Stout
"4.2 per cent with notes of chocolate and orange. Available in 650 millilitre bottles at private liquor stores."
beer bomber brewing brewery cbc craft brewed howe sound brewery moon under water brewpub on the coast rebecca whyman