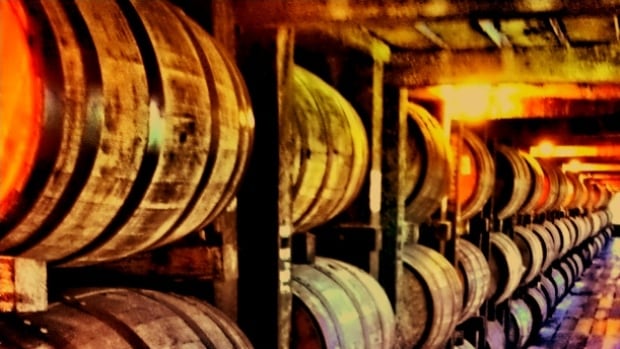 Right now these barrels hold delicious whiskey, but who knows? Maybe they could soon be filled with delicious beer. (Tim Moffatt/Flickr)

For some time now, craft brewers have been aging and conditioning their beer with whiskey and bourbon liquor barrels to add another dimension of flavour to the beer.
According to On the Coast beer columnist Rebecca Whyman, that script is now getting flipped, with distillers who produce those spirits taking back those barrels to add a little beer flavour to their spirits.
She says several different distillers are trying out this technique.
"Jose Cuervo and Jameson both have ale-barrel aged spirits on the market," she told On The Coast host Stephen Quinn.
"Neither of these are premium brand spirits, but the aging in the ale casks reportedly settled and smoothed the tequila to a point it was enjoyable without salt and lime, and added chocolate and roast notes to the whiskey that demanded to be enjoyed neat."
Whyman believes this could become a trend going forward, and might work locally as there are several local brewery-distillery combos.
Here are Whyman's picks for this week, including a rare non-beer pick:
Jameson Caskmates Whiskey
"Available at 34 B.C. Liquor Store locations … I haven't tried it yet as I'm still on the January wagon, but my friend Ryan tells me that it is a 'perfect rainy-night-by-the-fire drink.'"
Central City Brewers Belgian style sour brown ale
"This limited edition sour was aged for two years in Cabernet Sauvignon oak barrels and is 9.2 per cent ABV. Available on tap at the tasting rooms and in 750 ml bottles later this month."
Off the Rail's ISA
"The first small batch sold out really quickly at the tasting room. But there will be another small batch on tap this weekend. Get it while you can! Or wait until June when the next batch of this 4.4 per cent ABV sessional with Mosaic and Centennial hops goes into tall cans."
To hear the full story, click the audio labelled: Tried liquor-flavoured beer? Get ready for beer-flavoured liquor.