1908 Historic Pale Ale brewed with over 100-year-old recipe, and

ingredients from that time 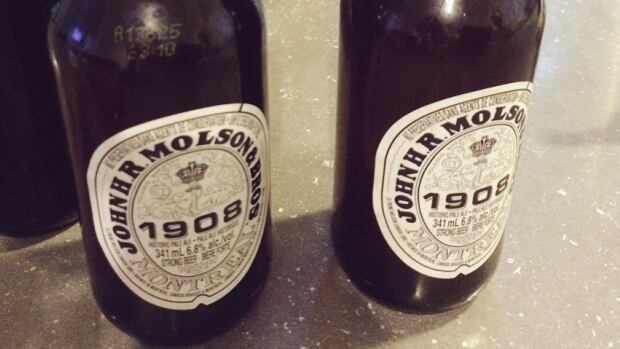 Two bottles of Molson's 1908 Historic Pale Ale. Beer columnist Rebecca Whyman says the beer uses ingredients and a recipe that closely resembles those used around the turn of the 20th Century (@MolsonTonia/Twitter)

Regular listeners to On The Coast will know that beer columnist Rebecca Whyman is a big fan of B.C.'s small craft brewers.
So regular listeners will be surprised to hear about the brewery she's a fan of this week: Molson.
She says she's "intrigued" by Molson's new product, their 1908 Historic Pale Ale, an attempt to recreate the beer the mega-brewery was putting out over 100 years ago.
"I love the historical aspect. Molson's has been brewing in Canada for 230 years, and regardless of what you may think of their products, that's a great achievement," she told On The Coast host Stephen Quinn.
"Going back into the archives to resurrect old recipes is a fitting way to celebrate that long history. I also appreciate that Molson's hasn't tried to take on craft beer by coming out with another shadow brand."
Whyman says the 1908 Historic Pale Ale has ingredients sourced as closely as possible to those used in 1908, and is meant to be drank at room temperature.
But if you're looking to try something made this century, here are Whyman's picks for the week.
Kermode IPA by Steel Toad
"A big, tropical, seven per cent India pale ale available on tap at the brewery."
Peche Mortel by Dieu du Ciel Brewery in Montreal
"If you missed the International Peche Mortel Day celebrations of last weekend, fret not, you can enjoy this sinfully divine coffee-infused imperial stout in bottles from private liquor stores."
Hikari Imperial by Fuggles & Warlock and Powell Street
"A collaboration brew from dry-hopped sourweisse — a 7.2 per cent kettle sour available at the Powell Street tasting room and in 650 ml bottles."
1908 historical pale ale beer cbc website collaboration beer craft brewed dieu du ciel fuggles and warlock molson coors peche mortel powell street shadow brand steel toad