Check out Rebecca Whyman's beer picks for some Guinness
alternatives 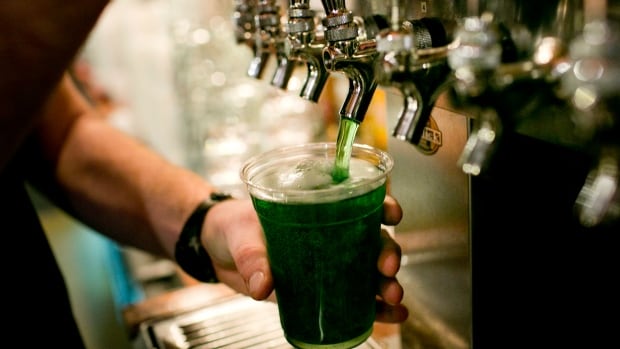 With just two days to go until St. Patrick's Day, bars, pubs, clubs and liquor stores will be getting ready to sell about 13 million pints of Guinness dry Irish stout.
But On The Coast's beer columnist Rebecca Whyman says if you're looking for something a little different on March 17, there are several locally made beers that will delight.
"Dry Irish Stouts tend to have a bit of a lighter body, which makes them very drinkable," she told On The Coast host Stephen Quinn.
"They're usually a lower carbonation brew and can be served on a nitro system for a creamy mouthfeel. The bitterness comes from both the roasted barley and the hops, though the roasted malt will be the more noticeable flavour."
Here are Whyman's picks — and please, don't bother with the green food colouring.
Ravens Brewing Dry Irish Stout
"A new release, just in time for the big day! Dark roasts married with a crisp bitterness and dry finish. Available in 650 ml bombers and on tap at the Abbotsford tasting room."
Storm Brewing's Black Plague Stout
"8 per cent of deep, dark and delicious. On tap around town and at the brewery for growler fills."
Main Street Brewing's Oxymoron Dry Irish Stout
"4.6 per cent of dry and roasty goodness. Available at the tasting room."
With files from On the Coast
beer cbc radio cbc website craft brewed dry irish stout guinness main street brewery on the coast ravens brewing rebecca whyman st. patrick's day stephen quinn storm brewing