from the cbc website, here are the highlights from yesterday's beer column on 'on the coast'
with stephen quinn:

Check out beer columnist Rebecca Whyman's picks from the 2016 awards 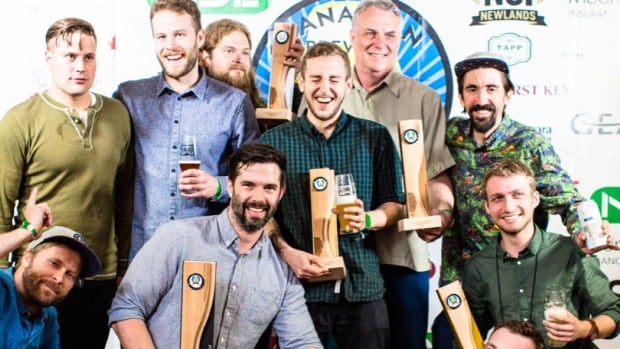 The Four Winds team celebrates with their hardware at the 2016 Canadian Brewing Awards. The Vancouver brewery won the Beer of the Year award for their dry-hopped sour, Nectarous. (@FourWindsBrewCo/Twitter)

It's been a busy week for craft beer fans, says On The Coast beer columnist Rebecca Whyman.
Vancouver Craft Beer Week wrapped up over the weekend, and this year's event was unique because at the same time, Vancouver and Richmond hosted the Canadian Brewing Awards at the end of May.
It's the first time the event was held in B.C., and Whyman says local breweries took advantage of their time to shine, winning 52 of 163 medals.
"Last year's Brewery of the Year, Four Winds, came away a big winner again this year, winning four medals as well as the highly coveted Beer of the Year award for their dry-hopped sour, Nectarous," Whyman told On The Coast host Stephen Quinn.
"In years past some people had felt there was an Eastern bias to the awards. Having Vancouver host the awards, at the same time as Vancouver Craft Beer Week, sends a message to the rest of Canada that B.C., and Vancouver in particular, are major players in the beer world and that our explosive growth is not happening at the expense of quality."
Other local podium highlights include:
Three medals for Off The Rail and Main Street Brewing
If you want to taste some award-winning offerings, here are Whyman's picks from the award winners.
Powell Street's Old Jalopy
"A multi-award-winning pale ale. This one was the beer of the year in 2013, and won silver this year at the Canadian Brewing Awards, as well as taking a bronze at the World Beer Cup.
"Old Jalopy is a traditional English style pale ale combined with spicy, citrusy and floral North American hops. 5.5 percent, available in 650 ml bottles at liquor stores and the tasting room and on tap around town."
Four Winds' Nectarous
"Beer of the year according to the 40 accredited beer judges at the Canadian Brewing Awards — and every beer geek I know, as well! Sour, peachy, and nectariney, with citrus and passionfruit notes from being dry-hopped with Galaxy hops.
"It's tart, it's refreshing and you owe it to yourself to try it! 5.5 percent, available in 650 ml bottles at liquor stores and at the tasting room."
Off the Rail's Raj Mahal India Ale
"Gold medal winner at the Canadian Brewing Awards, this is a delicately spiced ale. Not to be mistaken for an IPA, this is an India-inspired ale.
"With a hint of lemongrass, notes of lime and gentle hopping, this a really drinkable and refreshing beer, perfect for the hot summer weather. Five percent, available in 650 ml bottles and on tap at the tasting room."
With files from CBC Radio One's On The Coast
beer beer column canadian brewing awards cbc radio cbc website craft brewed four winds brewing nectarous off the rail on the coast powell street rebecca whyman stephen quinn vancouver craft beer week