Beers are great at barbecues

for drinking — and eating?

Plus, check out Rebecca Whyman's beer picks for the week 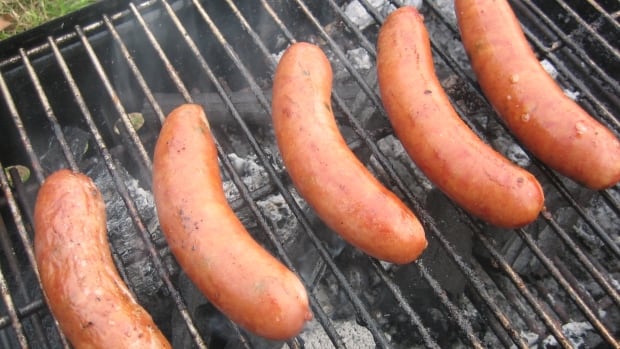 If you're looking to add a little something to your sausages, consider poaching them with beer, Rebecca Whyman says. (Austin Keys/Flickr)

Cold beer is an essential part of any good summer barbecue, but On The Coast beer columnist Rebecca Whyman says beer isn't just for drinking at barbecues: it's also for cooking.
She says beers are great for poaching sausages: just poke holes in the sausages, meat or vegetarian, let them soak in beer for an hour or so and throw them on the grill.
"Really, you can't go wrong with beer and sausages," Whyman told On The Coast guest host Michelle Elliot. "The beer's acidity and carbonation cut through the fats in the sausage, cleansing your palate between bites so that you can taste every single mouthful of juicy sausage."
Whyman says for spicy sausages, a crisp wit beer like Powell Street's witbier with ginger and cardamom is a nice pairing; a frank pairs nicely with a cream ale like Phillips' Slipstream Cream Ale; a sweet Italian sausage pairs well with a saison like Four Winds'; Kielbasa goes well with a pilsner; chorizo and lager pair well and turkey or chicken sausage pairs nicely with a gose.
There are plenty of other ways you can cook summer barbecue foods with beer, and Whyman says The Beeroness blog has lots of good ideas.
Here are Whyman's picks for beer this week.
Strange Fellows' Reynard Oud Bruin
"A style for which brewer Iain Hill is renowned.,This one has been aging and souring and becoming awesome in barrels since the brewery opened a year and a half ago. The Oud Bruin is a Flemish style of sour, reddish brown in colour, and not to be confused with the light, fruity and tart kettle sours available. This is a barrel-aged, medium-bodied, dark and rich sour, with notes of vanilla, oak and cherries. 6.5 percent, available in 750 ml bottles from the brewery."
Main Street/Powell Street's The Streets collaboration
"If you like peaty flavours, then this golden ale is for you! It's a Scottish golden ale of a mere four percent alcohol. Quite smokey and full-bodied for its modest alcohol level, this is also a very carbonated beer, adding to its refreshing qualities. This is a blended beer: half was fermented at Powell Street in oak whiskey barrels and half at Main Street in stainless steel. Available on tap and in 650 millilitre bottles at both tasting rooms."
Parkside Dusk Pale Ale
"Billed as a relaxed West Coast pale ale, the Dusk is an easy-drinking beer with light northwest hopping and smooth malt character. 5.3 percent, available on tap at the tasting room currently, and eventually in cans."
With files from CBC Radio One's On The Coast