Warm the cockles of your heart
with these cozy winter beers 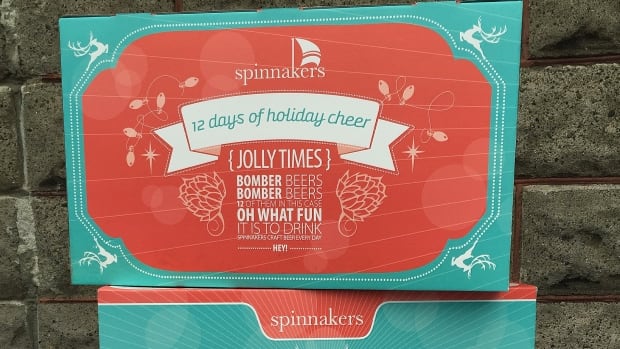 The days are getting a lot shorter and a lot wetter, which means winter is finally coming to B.C.
But even if the weather isn't so nice, at least there are great winter beers to look forward to, On The Coast beer columnist Rebecca Whyman says.
She says there are no hard and fast rules surrounding what can be considered a winter beer.
In general, what we think of as winter beers tend to be richer, sweeter and darker roasted, and sometimes quite boozy with a strong malt profile.
"I think what people look for in a winter beer is one that makes them feel cozy and warm," she told On The Coast host Stephen Quinn. "Winter ales often have a higher alcohol content, which certainly helps those feelings of cozy warmth."
One way to enjoy winter beers — and others, to be accurate — is a beer advent calendar.
Parallel 49 and Central City's Seasons Greetings 24-pack advent craft beer calendar is out again this year. It features holiday seasonal favourites and brand new beers exclusive to the pack. The beers include sours, stouts, scotch ales, porters, winter ales, IPAs and pale ales — five of which won awards at the 2016 B.C. Beer Awards.
There is also the Spinnakers' 12 Bombers Advent Box for the 12 days of Christmas, which has a different 650 ml bomber for each of the days including some made just for the box.
Here are some of Whyman's picks for winter beers you don't need to buy an advent calendar's worth to try.
"Strange Times for Modern Fellows" Saison
"This is a collaboration brew from June 2016 between local Strange Fellows and San Diego's Modern Times. It's a complex, dry and refreshing saison made with a multi-culture of yeasts. It has flavours of pineapple, lemon and lychee. 6.5 per cent, available in 750ml bottles."
Bridge Brewing's Sleigh Booster
"An imperial red ale hopped with Chinook, Centennial and Columbus hops to balance out all of the caramelly malts. It pours a lovely red colour. Nine per cent, available in 650ml bottles for sharing."
Dageraad Brewing's Dark Days
"A saison brewed with oats and fennel. It's dark amber in colour, with spicy and fruity notes. Available on tap at the tasting room in Burnaby, and at bars around town."
With files form CBC Radio One's On The Coast
bridge brewing cbc website central city brewing dageraad on the coast parallel 49 brewery spinnakers stephen quinn strange fellows winter ale