dinner? Here are some tips

No rules for beer pairing — just some guidelines 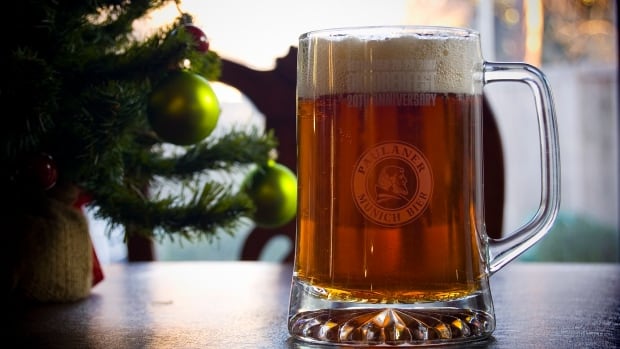 You can serve more than wine at your family's Christmas dinner. (John McStravick/Flickr)

Nothing beats a nice glass of wine at Christmas dinner — except maybe a nice glass of beer.
On The Coast beer columnist Rebecca Whyman has some thoughts on what craft brews are best to serve with your holiday feast.
"There are no hard and fast rules for beer pairing. Complementing or contrasting flavours are the two basic ways to go, but within those, you can go so many different places. So the best non-rule is to drink what you like," she told On The Coast guest host Chris Brown.
"Complementing is when you match like-flavours, like a chocolate stout with your chocolate cake. Contrasting is when you pair opposites, like a sour beer with a sweet dish. This can also be used to balance flavours. Using the sweet maltiness of beer to counter the saltiness of a dish or the bitterness in a hoppy beer to cut the sweetness."
Whyman says a more carbonated beer, like a dubbel or a saison, will cleanse your palate between bites of food and cut through fat.
She says if you're going with lighter fare, like turkey or tofurky, the saison might be more pleasing. The yeast and sweetness complement the gravy and the veggies, while the earthy spiciness brings out the flavours in the meat.
She also says if you're overwhelmed by trying to choose a beer that will work with all the dishes, you could choose your favourite part of the meal and pair your beer to that.
If mashed potatoes are your thing, maybe you'd like to drink a cream ale to mimic that smooth mouth feel. If it's all about tart cranberry sauce for you, pair with a lambic. For latkes, a golden ale is lovely.
"Or if you have the inclination, you could try a variety of beer styles taster flight style and see which ones work with the most dishes," she said. "If you take notes, you can use that information next year."
She also says if you're the one doing the cooking, you can always use beer in the food and then serve that beer alongside that course for an easy pairing.
Here are Whyman's beer picks for this week:
Luppolo Brewing Double IPA
"Available at the brewery for tasters and growler fills. Using five northwest hop varieties gives it aromas of peach, melon and citrus zest. Be careful: this one is eight percent alcohol but tastes like five!"
Twin Sails Two Straws Milkshake IPA
"This one is thick — you'll need two straws! It is brewed with lactose, hence the milkshake name and lots of mango and pineapple. Get this very limited release before it's gone at the tasting room in Port Moody. 6.5 percent."
SuperFlux Happyness
"Formerly known as Machine Ales when they brewed at Callister, this is their most recent offering under the SuperFlux name. Happyness is a seven-percent IPA that's bright and clean and fruity. Four-packs of cans will be hitting liquor stores any day now."
With files from CBC Radio One's On The Coast
beer beer pairing cbc website chris brown craft brewed dubbel food pairing holiday luppolo on the coast rebecca whyman saison superflux twin sails