- January 05, 2017
my latest beer column extract on the cbc website

Milkshake beer could be among

Beer columnist gives us her thoughts on what will be popular in B.C.'s 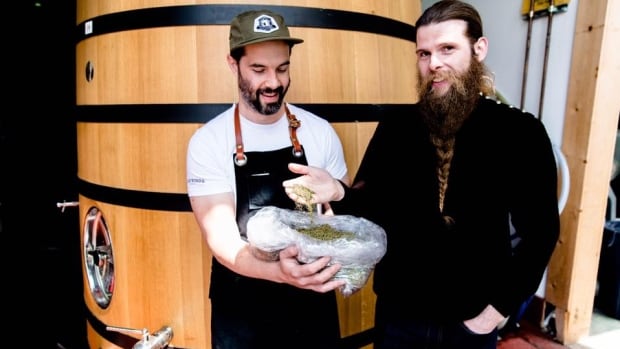 Everyone wants to know what the future holds, and On The Coast beer columnist Rebecca Whyman says the future of craft beer in B.C. — at least for 2017 — is the New England India Pale Ale.
Also known as the Northeast-style IPA, New England IPAs are less bitter than a Northwest IPA, which makes them more approachable for most people. Whyman says they have fruity, citrusy flavours and a creamy soft mouthfeel, an unexpected sensation for drinkers used to Northwest IPAs.
"We saw Vancouver's first version of this style of beer, Steamworks' Flagship IPA, win the best IPA and best in show at the 2016 B.C. Beer Awards," she told On The Coast host Stephen Quinn.
"[Hops] are added at the end of the boil, and dry-hopped during fermentation. This adds a lot of hop flavour and aroma, but very little bitterness."
Another possible 2017 trend? Milkshake IPAs: hoppy beers with lactose sugar added to make them thick, milky and sweet.
"Using the words milky and fruity together doesn't sound terribly appetizing, but believe me, the beers are delicious and very approachable," she said. "Locally, Twin Sails Brewing in Port Moody recently brewed their Two Straws Milkshake IPA."
Here are Whyman's beer picks for this week:
Steamworks Flagship IPA
"Cloudy and juicy! Generously hopped with Mosaic, Galaxy and Citra hops for an intense tropical fruit aroma and just a touch of bitterness. Available by itself in six packs of bottles, or as part of eight-pack tall-can mash-up packs."
Four Winds Blodberg
"A dark nordic saison brewed with plums and arctic thyme, and aged in an oak foeder. This is a collaboration beer inspired by Iceland. Get it while you can! 750 ml bottles at specialty stores and the tasting room."
With files from CBC Radio One's On The Coast
beer beer column cbc website craft brewed four winds brewing milkshake ipa new england ipa on the coast steamworks