brewers to box each other for
charity 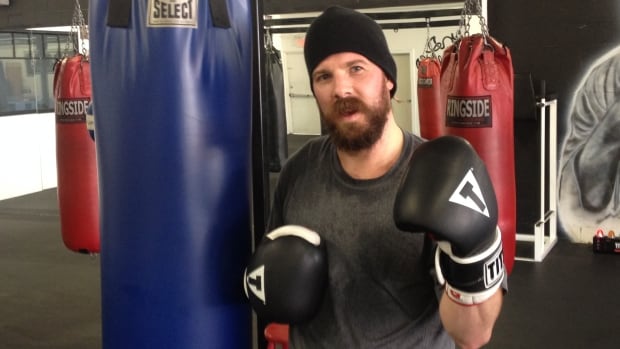 Ian Kampman of Brassneck Brewery was a contender at the 2016 edition of Beer Wars. This year, On The Coast beer columnist Rebecca Whyman will enter the ring. (Jeremy Allingham/CBC)

People in B.C.'s craft beer industry are ready for another round — in this case, another round in the boxing ring.
The second annual B.C. Beer Wars will see people in Vancouver and Victoria's craft beer scenes box each other to benefit two local gyms, the Eastside Boxing Club in Vancouver and the Victoria Boxing Club.
Both gyms have a number of community programs focused on at-risk youth, mental health and self-defence classes for female-identified and LGBTQ members of the community.
Contenders from the beer industry will learn how to box and then fight each other at a fundraising boxing match at the end of April and among the contenders will be On The Coast beer columnist Rebecca Whyman.
"I'm both looking forward to it and wondering what the heck I was thinking signing myself up for this," she told On The Coast host Stephen Quinn. "It's gonna hurt! I am looking forward to seeing all those beer beards flying as their owners get skipping and punching — assuming of course I can catch my breath long enough to focus on anything else."
And since Whyman is going to be working out a lot in preparation for her match, here are her picks for post-workout beers.
Powell Street Brewery's barrel-aged saisons
"They are classic Belgian saisons aged in French oak barrels for three months. They're spicy and fruity! Fruit additions are local raspberries, tropical mangoes or rich black currants. Available in 650 ml bottles at the brewery and select liquor stores."
Parallel 49's Tricycle Radler
"Always delicious! It's a 3.5 percent blend of lager and ruby red grapefruit juice. It's tart. It's juicy. It's refreshing and it's dangerously easy to forget this is not just fruit juice! Available in six packs of cans at liquor stores."
Fieldhouse Gose
"Salty, sour and citrusy! 3.8 percent of light and bright minerally goodness. Coriander and elderflower replace hops in this wheat beer for a different take on a classic German style. Available in 750 ml bottles at select liquor stores."
With files from CBC Radio One's On The Coast
bc beer wars beer beer column boxing british columbia cbc website craft brewed eastside boxing club field house brewing gose on the coast parallel 49 brewery powell street radler saison stephen quinn