On The Cost beer columnist says craft brewers coming together is
regularly seen in B.C. 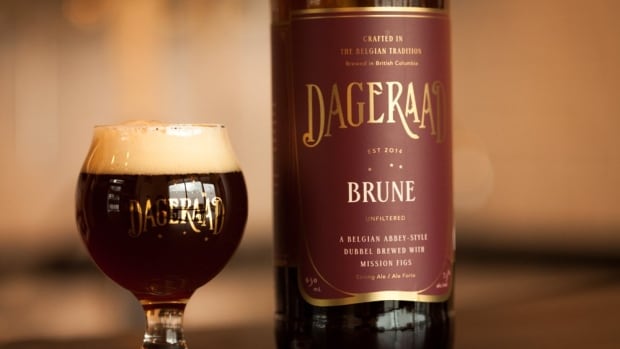 Dageraad Brune is one of Rebecca Whyman's beer picks for this week. (@DageraadBeer/Twitter)

On Valentine's Day, On The Coast beer columnist Rebecca Whyman is celebrating the love B.C.'s craft brewers show for each other.
Cooperation in the craft beer industry is nothing new, but a new example of that cooperation was recently seen when misfortune struck Burnaby brewer Dageraad and cost it a great deal of its product.
"There was a malfunction in their new bottle-conditioning room. Quite a few pallets of bottled beer were affected and had to be destroyed," Whyman told On The Coast guest host Belle Puri. "This was a big financial blow to a small brewery like Dageraad.
"So what did the beer community do? Over social media, they encouraged everyone to support Dageraad by buying their beer."
The assistance took many forms, Whyman said: in addition to the social media support from other brewers, bars and restaurants offered Dageraad taps to help with cashflow; retail stores are ordering extra beer and making special displays to feature their beers; Chilliwack Hop Farm offered free hops to rebrew the lost beers; and their label printer even offered a discount.
"Craft beer is about more than really tasty beer. It feels good to be a part of a community that cares," Whyman said.
Here are Whyman's picks for this week, all from Dageraad.
Dageraad Blonde
"Made with Pilsner malts and noble hops, this blond ale has a fruity spicy, citrusy aroma. European hops and spices marry with the Dageraad house-yeast for depth and complexity. The Blonde pairs nicely with salads, charcuterie and desserts, making it a perfect dinner beer."
Dageraad Brune
"Brune is a Belgian-style abbey ale. Made with mission figs and Belgian yeasts, this unfiltered beer is a religious experience. You've got the Franciscan missionaries who planted the originating figs in the San Diego area, and the Trappist monks who brewed in Belgium, making this a true North American take on a Belgian beer."
Dageraad Sri Lanka
"Sri Lanka will be available again shortly. This is a cultural mash-up of a Belgian-style dubbel made with tamarind and Sri Lankan treacle. The sweet treacle is a nice counterpoint to the tart tamarind. Add in the spicy and fruity notes from the yeast and the hops and you've got yourself a great pairing for South Asian cuisine."
With files from CBC Radio One's On The Coast
beer blonde brune cbc website community craft brewed dageraad on the coast rebecca whyman valentine's day