Last whimper for the growler?
Columnist predicts craft beer
mainstay could fade away 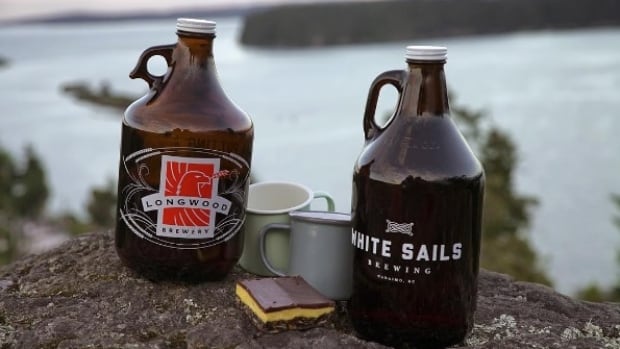 Growlers from Nanaimo breweries Longwood and White Sails. Rebecca Whyman says the refillable bottles, part and parcel of the craft beer experience, could be on their way out. (@BCAleTrail/Instagram)

On The Coast beer columnist Rebecca Whyman says the B.C. craft beer scene may have had its fill of the growler.
Whyman says the drawbacks of the refillable containers, usually one or 1.89 litres in size and used to take away beer from breweries that don't sell individually canned or bottled offerings, are turning off both consumers and craft brewers.
"Beer drinkers may find growlers are a pain to keep clean. All but the stainless steel ones are breakable. They're inconvenient, because you have to plan to bring them with you and you've got to carry them around with you," she told On The Coast host Stephen Quinn.
"If people aren't cleaning them properly, the beer isn't going to taste good. If you wait too long to drink the beer, it will go flat. If you leave the growler in the heat, the beer will go off.
Uneducated consumers may blame these things on the beer, rather than on their mistreatment of the growler, which can compromise the reputation of the brewery."
Whyman says she doesn't predict growlers to disappear entirely — at least not in the short term — but they could become less prevalent as craft breweries start canning more of their products.
But if you still love your own collection of growlers, here are Whyman's picks for great places to get them filled:
Boombox Brewing Crossfader Double IPA
"Brewing out of Callister Brewing, Boombox has rotating beers on tap there. Currently on tap and available for growler fills, the cloudy and fruity double IPA is perfect for sharing with friends. This is a heavy-hitter, 8.7 percent alcohol that doesn't taste like it, so be careful!"
Luppolo Brewing Double IPA
"Heavily hopped, yet very well-balanced. This double IPA uses five different hops to give you aromas of peach, melon and citrus zest. This is also a heavy-hitter at eight percent but so very drinkable."
Brassneck Brewing Passive Aggressive
"This dry-hopped, seven-percent-alcohol pale ale is always a crowd pleaser. It has slightly sweet malts and punchy hops, and despite its name, it will always treat you right. This was Brassneck's first beer, and it remains one of two that are almost always on tap and available for growler fills."
Storm Brewing Precipitation Pilsner
"A very easy five percent. As we head back into the rain, this North German-style pilsner will make the grey go away! Light in colour, crisp and clean in body, with just a little taste of hops. It is pure refreshment."
With files from CBC Radio One's On The Coast
beer boombox brewing brassneck brewery cbc website growler luppolo rebecca whyman stephen quinn storm brewing vancouver