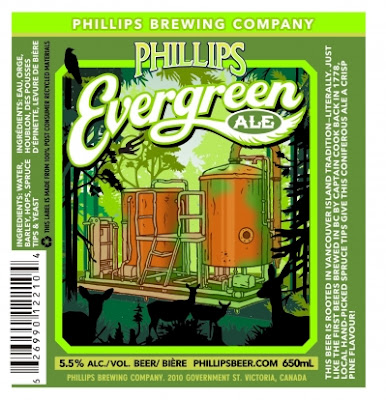 July 30th 2012: While history may trumpet Captain James Cook as a brave explorer, master navigator and meticulous cartographer, we believe his greatest achievement lies in guiding his men to be the first Europeans to brew beer in BC! In March of 1778, Cook limped his ships, Discovery and Resolution, into Nootka Sound and, upon landing, went about repairing their masts and brewing a spruce beer from a mixture of molasses and fresh Sitka needles.

Our Evergreen Ale is crafted as an homage to Cook and BC brewing history. Just like the explorers of old, we set out on our own little conquest to gather fresh spruce for the brew but what started as a simple harvesting mission quickly turned into a full-blown backwoods adventure when things didn't go exactly as planned...(Check the video on Vimeo or YouTube)

The story does have a happy ending though, in a beer endowed with a citrus-pine taste that might inspire you to become a history buff. Cook was only in Nootka Sound for a month, and this beer is only in private craft-focused liquor stores on Vancouver Island and the Lower Mainland for a limited time.
beer craft brewed evergreen ale history lower mainland phillips brewing spruce tip vancouver victoria