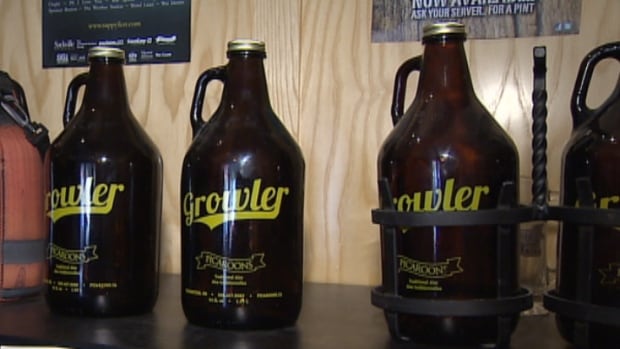 A growler is a common way to buy fresh beer from a local brewery. (CBC)

Over the past week craft beer enthusiasts have been arguing over Twitter about beer growlers and whether or not they're the best way to buy beer.

Growlers are a large, glass bottle that commonly holds up to 2 L of fresh suds from your local brewery.

On the Coast's beer columnist Rebecca Whyman says the tradition of buying beer in growlers is centuries old and is not just a trend. However, she warns that they may not always be the best way to drink beer.

"Growlers are a great choice if you're looking for an inexpensive way to feed fresh beer to multiple people," says Whyman.

But she warns that the beer quickly starts to lose its carbonation after the growler has been opened.

"Unless you're interested in drinking the beer very soon after filling the growler, you might just be better off buying a six pack of recyclable bottles or cans," says Whyman.

Another disadvantage is that growlers that aren't properly cleaned can lead to a higher risk of spoilage.

As an alternative, Whyman suggests trying the "canpedo," also known as a "crowler." It's a one-litre aluminum can filled to order at the brewery.

"Like cans over bottles, the canpedo solves a couple of other growler issues, like oxidation and getting light struck," says Whyman. "Plus, cans aren't breakable and weigh less than bottles."

The can isn't reusable, but it is recyclable.