- October 28, 2015
it's almost november now
and i can't grow a moustache (okay, well, i don't want to talk about whether or not i can)
so, let's talk about beer advent calendars instead!


Last year was a really good year with three advent calendars available in BC.
This year there will only be two here, the Phillips Snowbox and the Central City/Parallel 49 Craft Crossing.

The original Craft Beer advent calendar won’t be available in BC this year.  Even though it contains beers from British Columbia’s Bridge, Townsite and Lighthouse Breweries, the Craft BeerAdvent Calendar is not being sold in BC due to beer regulations.  Gah!  Stupid red tape keeping the good people of BC from a third advent calendar.

Pick up your Snowcase by Victoria’s Phillips Brewing Company, which is available in stores now. And pick up your Parallel 49 / Central City collaboration Craft Crossing calendar in the coming weeks.

The Snowcase features 24 different Phillips beers, including exclusives and rarities (see below for the press release).  There will also be a blog beginning December 1st for you to interact with, at snowcasecalendar.com, with back stories and tasting notes, as well as feedback from drinkers.

The Craft Crossing (called the Mystery Box last year) will feature 6 staple beers from each of Parallel 49 and Central City, plus six new beers for the season from each of them (see below for the press release).  The beers will include sours, bocks, stouts, pale ales and winter ales.

Ho ho ho! It may not feel like winter in B.C., but for beer lovers, December
can't come fast enough 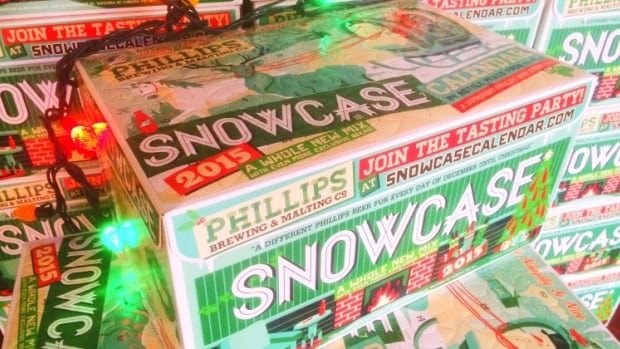 Phillips Brewing is one B.C. company offering up beer advent calendars for 2015. (phillipsbeer.com)

Is it too early to talk about Christmas?
Not if you're talking Christmas beers, On The Coast beer columnist Rebecca Whyman says, and more specifically, beer advent calendars.
In case you haven't heard of a beer advent calendar, think of the usual advent calendar, which might give you a chocolate or toy every day for the 24 days leading up to Christmas.
Now, replace those chocolates with a selection of beers.
However, buyers of beer advent calendars might find themselves disappointed this year, says Whyman.
"Last year was a really good year with three advent calendars available. This year there will only be two in B.C., the Phillips Snowbox and the Central City/Parallel 49 Mystery Gift box," Whyman said.
That means the original Craft BeerAdvent calendar won't be available in B.C. this year, she said. Even though it contains beers from British Columbia's Bridge, Townsite and Lighthouse Breweries, B.C. beer regulations mean it can't be sold in this province in 2015.
"The 2015 Craft BeerAdvent Calendar features some cans and some bottles that are on the refill program and due to regulations which prohibit the mixing of such containers within the same package in B.C., we will not be able to offer the Craft BeerAdvent Calendar in British Columbia in 2015," Craft said in a statement.
Craft says they plan to have the BeerAdvent Calendar back on the shelves for 2016.
But all is not lost, Whyman says.
There's still the Phillips Snowcase with 24 different beers brewed by Victoria's Phillips Brewing Company and the Mystery Gift Beer Advent Calendar, which, "rumour has it will contain more surprises this year than last," she said.
Both will be available soon, for around $60.

Count Down to Christmas with 24 different Phillips Beers October 21st, 2014: The Snowcase Calendar is back!! 24 different Phillips beers in one case designed to help you count down to Christmas the best way possible: with beer!!
This year’s Snowcase has even more exclusive and rarities to be discovered. They have started to leak out to stores now, but will be hitting different areas at different times. To get your Santa claws on one please head to snowcasecalendar.com/find. This page is updated regularly and gives the most up-to-date listings of where you can grab one broken down by area. You can also see live BC Liquor Store availability at bcliquorstores.com
Once December rolls around we will be hosting a daily tasting blog at snowcasecalendar.com, complete with beer backstories, tasting notes, and a place for discussing each beer of the day. Make sure you check back then and join the party!
Good luck on the hunt, and don’t forget to head over to the website to follow along starting December 1st!

Just in time for the holidays, the Craft Crossing Calendar is returning to liquor stores in B.C, Alberta and Manitoba in early November. The holiday pack celebrates the brewing prowess of brew masters, Parallel 49 Brewing Company’s Graham With and Central City’s Gary Lohin. Each Craft Crossing conductor is brewing six new special brews unique to the holiday collaboration that include sour beers, stouts, bocks, pale ales and winter ales.

“The response from last year’s collaboration was tremendous and this year, we injected even more holiday cheer with 12 new unique brews,” says Gary Lohin, Brewmaster at Central City Brewers and Distillers. “These holiday brews can only be found in the Craft Crossing Calendar and the beers in the 24-pack will remain a mystery until you open them, just like you would with a traditional chocolate advent calendar.”

“The Craft Crossing Calendar was a challenging and rewarding project for our team,” says Graham With, Brewmaster at Parallel 49 Brewing Company. “Expanding the depth of the project by adding more unique beers than last year allowed for us to stretch our legs creatively and deliver a what we hope is a great experience for those buying the pack.”