- October 01, 2015
eeesh, it's nice to be on the cbc website, but remind me never to read the comments!
i keep forgetting how mean people can be...

you won't want to miss

Fresh hops add a different flavour to beers, says On The Coast beer 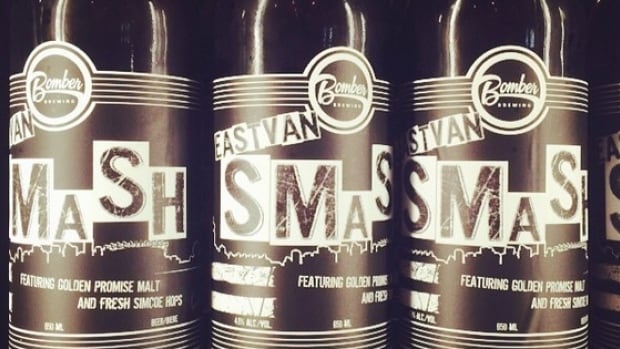 Bottles of Bomber Brewing’s East Van Smash. On The Coast beer columnist Rebecca Whyman says this beer, made with B.C. hops, is one to try this fall. (bomberbrewing/Instagram)

For beer drinkers, it's the most wonderful time of the year according to On The Coast beer columnist Rebecca Whyman.
Whyman says that fresh hops season is upon us, and that means a lot of releases coming out right now have a "fresh and vibrant" flavour.
"This is part of what makes this time of year exciting. The harvesters were in a hurry to harvest while the hops were at peak flavour, the brewer had to hurry to brew within 24 hours of the harvest, you have to rush out to buy the beer as soon as you hear it's in stores, and then you have to hurry up and drink it," she told On The Coast host Stephen Quinn.
"Fresh hops impart more of a green, grassy, herbal flavour than dry ones. It's a little hard to describe. Kind of comparable to a freshly-mown lawn. Or using fresh herbs instead of dried."
Whyman says some great limited-release beers have already been delivered for the 2015 hop season.
Here are some of her picks.
Driftwood Brewing's Sartori Harvest IPA
"This is the one that started the local craze several years ago. The hops used are from the Sartori farm in Chilliwack. They are harvested, then rushed over to Victoria where they are brewed the next morning. Beer nerds love to talk about this year's hops versus last year's versus the really fabulous ones three years ago. I can't actually remember what I thought of last year's Sartori, besides that it was yummy!"
Steamworks Hop Attack
"Using fresh Centennial Hops, this vibrant, floral brew exudes a citrus, earthy aroma. Round that out with a pale and honey malt and a beautiful balance is created. Pouring a rich topaz, this quaffable beer is sure to please even the biggest of hop heads."
Bomber Brewing's East Van Smash
"This is a fresh hopped version of their single-malt single-hop India session ale — SMaSH — get it?
Hoyne's Wolf Bine Wet Hopped Pale Ale
"A seasonal favourite sessional pale ale. The hops are from Pender Island and Chilliwack hops farms."
beer beer column bomber brewing cbc craft brewed driftwood brewing fresh hopped hops hoyne on the coast rebecca whyman sartori steamworks stephen quinn