- October 28, 2015
my notes from yesterday evening's beer column on cbc radio one's on the coast with stephen quinn:

As BC Craft Beer month comes to a close, fear not, there are more beer events coming up in November!!

Sunday, November 8 - Beer Can Derby – at the Wise Hall, Vancouver

Running from 1-5 p.m., this adults-only event will bring out the kid in you.  Make and race your own beer can car, down a 60 foot track.  Participants are encouraged to make their car before Sunday, but if you haven’t done so, you’ll still have time (and materials) to do so at the event.  There are three weight categories – for the cars, not the builders! – plus a best in show for the best looking car and a brewer’s cup to be won.  Trophies aren't all that's up for grabs either - there's a trip to Whistler, a cruiser bicycle and a home brew kit as well.  Proceeds are being donated to the Greater Vancouver Food Bank.  Check out the website at beercanderby.com for more details and to purchase tickets.

At Spacekraft at 4501 Kingsway.  Two sessions 4-7 or 8-11.  This tasting fest benefits Burnaby Community Services including the Burnaby Christmas Bureau.  There will be food trucks and live entertainment while you sip beers from breweries outside of Vancouver, like Old Yale, Be Right Back, Old Abbey Ales, Steel & Oak, Dageraad, Central City, Moody Ales, Black Kettle and Bridge Brewing.  $35 gets you three samples.  Check out the webpage at tourismburnaby.com for more details and to purchase tickets.

Last weekend's BC Beer Awards wrap up the BC Craft Beer Month festivities.

I had a great time, as usual.  This is such a great event – so many breweries attending with their beers - 78 breweries submitted 580 beers for judging this year, and 60 breweries, plus a few cideries were on-site to pour their beers for the festival portion of the evening.  And... 26 breweries submitted sour beers for the brewer’s challenge, which Stephen Quinn and I helped to judge.  It was Stephen's first time getting his judgey-pants on and he really enjoyed it.  I think that makes him a bona fide beer geek now!

Again this year some of the new breweries in the Province won awards, which is always nice to see.  If new breweries can keep opening and producing award-winning beers their first year, the local industry is in great shape!  Congratulations to BigRock, Doan’s, Strange Fellows, Forbidden, Hearthstone, Old Abbey and Ravens!

This is the 6th year for the awards, and every year the results manage to surprise me.  The surprise for me this year was the number of, shall we call them more mature breweries?  More established ones rather than older?  Anyway, breweries with some years under their belts who we haven’t seen on the podium for a while, were taking home not just one award, but several each.  Like Swans in Victoria who took both bronze and gold in the Strong Ale category.  Russell Brewing improved on their one trophy in 2014 by winning three this year, while Tree Brewing from Kelowna doubled last year’s haul, from one to two this year.  Whistler Brewing took gold in the UK red/brown ale category for their Black Tusk ale.  Which reminds me that I need to go back and try these beers again!  I’ve been allowing the draw of the new to tempt me away from old favourites.  There are so many great beers in BC right now, and only so many days in the week... it’s really hard being a beer geek!

This year saw a change in the hotly contested North American IPA category, with the return of Central City Brewing’s IPA to the top of the heap, followed by Red Truck with the silver and newcomers Hearthstone (North Vancouver) taking the bronze.

As usual, Parallel 49 must have pulled some muscles climbing on to the stage five times to claim all their awards.  Brassneck took home three awards, plus the coveted “Best in Show”.  Bridge Brewing took gold in both Specialty IPA and Wood/Barrel aged, plus a silver in Specialty.  Tofino, Persephone, and Dageraad each took home three trophies.

The CBC people’s choice award went to Four Winds for their Nectarous... a sour beer!  2015 really is the year of the sour – the people have spoken!

For a list of all the winners, and some great photos, visit the BC Beer Awards website and Beer Me BC.

And there it was, BC Craft Beer month, over again for another year. 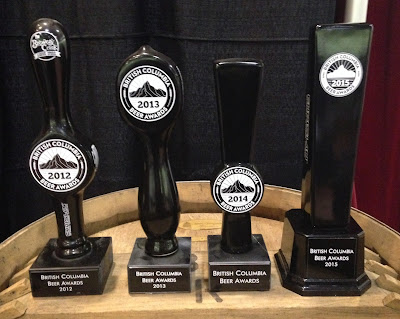 Get out to Brassneck Brewing for some of their “Best in Show” One Trick Pony single malt single hop imperial ipa,

In bottles, I suggest these three gold medal winners, all available in 650 ml bombers, perfect for sharing: