- September 11, 2012
i snuck a very quick trip to biercraft into my busy yesterday
because they posted that they had just tapped the very last known keg of phillips' 11th anniversary brew, the pandamonium
and... since i had been remiss on trying it when it was still available in bottles
i figured i'd better hop on over there when the universe gave me one last chance to try it! 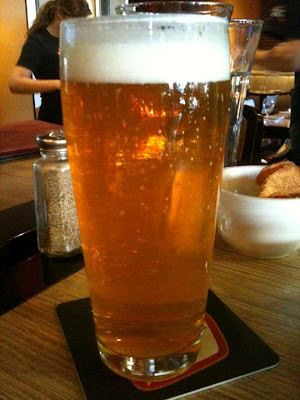 look how shiney bright it is!
holy crap, is it ever a bitter little hop monster though
ay carumba!

glad i finally got to try it
but i won't be going out of my way for another one
if you've got a bottle you aren't going to drink though, i'll happily take it
that 11% went right to my head!

i found it wasn't well balanced
but what the heck, i do like me a bitter little beer
and it sure paired nicely with those almost bbq flavoured chips they serve at biercraft!


August 13th 2012: A year ago we celebrated 10 years of brewing with a 10% Double IPA, and this year there was only one way to follow it up: Turn it up to 11!
So we dialed up the malt and hops across the board, and are celebrating 11 years of beers with Pandamonium–a double IPA monster. Brewed to 11%, we loaded hops into the pre-boil, and then added more hops every 11 minutes over a 111 minute boil for a grand total of 11 hop additions (plus a dry hop).
Hopquakes like this don’t come around very often and we only turn 11 once, so enjoy this brewtiful beast while you can! Pandamonium 11th Hour IPA is available for a limited time at finer craft-focused liquor stores.
anniversary double ipa pandamonium phillips brewing