- April 02, 2014
my notes from yesterday evening's beer column on weird beers on cbc radio one's on the coast
during which the poor sick stephen quinn suffered a coughing attack and could barely participate
oh the joys of live radio!

Did you see the new helium beers debuting from SamAdams and Stone Brewing?  Who would have thought you could put helium in beer, let alone that two breweries would race each other to the post to be the first to produce it.


But there are crazy and creative beers out there that are no joke!  Let’s take a quick tour of the zanier side of craft beer.


The craft beer community has embraced all sorts of brewing innovations, like brewing ales with lager yeast, adding different ingredients such as botanicals in the place of hops to experiment with different flavours, the hop wars and the highest alcohol content contest.


There are also interesting flavours brewers around the Lower Mainland and across the have been experimenting with. Locally first, Storm Brewing's James Walton is always coming up with interesting flavour twists. Earlier this Spring he brewed a dill pickle IPA. I was fortunate enough to get to try it on cask at 's. And I really liked it. I am a big dill pickle fan, and an IPA fan, so it probably wasn't that much of a stretch for me, but I did see some pretty interesting facial expressions on some of the other 's patrons when they heard about the cask. I asked James how he got the dill pickle flavour in the IPA. He told me that he took his mother's dill seeds and suspended them in alcohol for six years. Six years! Now that is dedication to your craft.


New Belgium Brewing beers are imported into by Beerthirst, so if you haunt your local specialty beer store, you should have come across beers from their Lips of Faith series.  The coconut curry hefeweisen is flavoured with coconut, cayenne, cinnamon, coriander, fenugreek seek, ginger root, kaffir and lime leaf, with a hint of banana from the hefe yeast.


' Mamma Mia pizza beer is actually is made with a whole margarita pizza in the mash and plenty of pizza spices to enhance the flavours of oregano, basil, garlic and tomato.  I want to try this beer!  I figure it must taste something like Storm's basil ipa, which I love. If anyone is in and wants to bring me back one, I'd appreciate it!


Also not available locally is 's Short's Brewing Company's Key Lime Pie, which is made with fresh limes, milk sugar, graham crackers and marshmallow fluff. The prominent sweet-meets-tart flavour won a Gold Medal at the 2010 Great American Beer Festival. If you're travelling around , try to find this one. And again, if you want to bring one back for me, I wouldn't say no!


Freetail Brewing in brews a green beer - it is coloured pale greeny blue from the addition of spirulina. Perfect for St. Patrick's day, if you happen to be in the area!


Moving away from flavourings now, we arrive at beer for non-humans.  Specifically beer for dogs.


Dog beer is only sort of beer. It does not have the four traditional ingredients in it as hops are toxic to dogs. It also doesn't have alcohol in it, so fido won't be hungover in the morning. Bowser Beer, which has been available in the for several years, is a non-carbonated mixture of meat-broth and malt barley, with glucosamine added for joint health.
Locally, Moon Under Water in began brewing their fundraising beer for dogs in August last year. It comes in two flavours, Beef & Barley Dunkel and Chicken & Peanut Pilsner, which feature beef or chicken stock, salmon oil and glucosamine to promote healthy fur and joints. There is also a Dog Beer in . Which just shows you how wide-spread the urge is to share man's greatest beverage with man's best friend.


Which takes us to man’s other best friend, his beard.  And beer brewed with yeast propagated from the brewer's beard.


Rogue's Beard Beer is brewed with a yeast created from Brewmaster John Maier's Beard. Rogue says it is perfectly normal to brew beer from beard yeast "Brewers have used wild yeasts in beer making for centuries. John has had the same Old Growth Beard since 1983 and for over 15,000 brews, so it is no great surprise that a natural yeast ideal for brewing was discovered in his beard." Most beer nerds who tried it, and alas I was not one of them, agreed that it was a decent enough beer, but they probably wouldn't drink it again.


For more weird beers, check out these articles, which include a beer that uses yeast from a hornet's abdomen; one that uses a strain of yeast over 45 million years old; beer made from coffee brewed from elephant pooped beans that sold for $100 a bottle; Sapporo Space Barley beer, brewed in 2009, which featured barley from the International Space Station; and Dogfish Head's Celest-jewel-ale contained dust from lunar meteorites. There is no end to creativity in beer brewing!


However, I think the most recent entry into the weird beer sweepstakes takes home the prize for my weirdest beer. To commemorate last weekend's season finale of AMC’s hit series “The Walking Dead,” a beer company brewed up a smooth, pale American stout. So far not weird at all right? Sure, right up until they put goat brains in it! The Dock Street Brewing Co. created the Dock Street Walker for die-hard zombie fans. It is brewed using wheat, oats, flaked barley, organic cranberries (for a nice bloody red hue) and smoked goat brains. Dock Street head brewer Justin Low said that contains “intriguing, subtle smoke notes” thanks to the addition of the brains.


And, just to really make you shake your head, that wasn't the first time that animal heads and their contents have been used in beer brewing… ’s Right Brain Brewery makes their Mangalitsa Pig Porter using actual pig heads and bones. The beer took home a gold medal at the Great American Beer Festival in 2011 in the Experimental category. It is only made once a year, and they say that the Mangalitsa Pig Porter is rich, chocolatey and “infused with a symphony of salty, smoky and savory flavors.”

I thought after that list of weird and wacky beers that I would keep this week's beer picks in the realm of the experimental, but much more down-to-earth:


First up, a collaboration beer between Victoria's Hoyne Brewing and Driftwood Brewing, the mash-up, is available in 650 ml bombers at specialty liquor stores in the city. Half a baltic porter was brewed and fermented at Hoyne, half at Driftwood. The brews were then combined by running a hose across their connecting parking lot. Available in both Hoyne and Driftwood designed bottles.


Secondly, head on over to East Van and try an infused beer at Parallel 49 and Bomber Brewing. Both tasting rooms have a randall - a tubular tower they fill with fresh ingredients and force beer through to get unique infused flavours. They change the ingredients daily, so follow them on twitter to find out what the flavour of the day is. 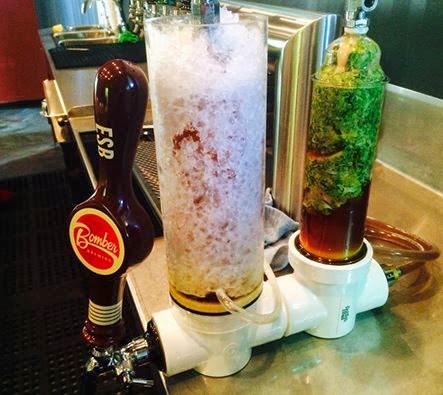