- April 22, 2014
You hear a lot about the breweries in Portland, but there are many other Oregon towns that offer an impressive number of breweries per capita. I had the opportunity to spend a weekend in Corvallis, about an hour and a half South of Portland. I thought there would be one or two good places for beer in a town of 50,000. Was I ever surprised when I started my research and came out with a long list of breweries and bottle shops. Not so surprising, I guess, when you take into account that Corvallis is home to Oregon State University, an international leader in the breeding and researching of hops. I couldn't make it to all the good beer on offer, but I gave it my best shot to hit as many as I could in a day and a night.
Any time I am travelling, I do beer research first, and usually take along a beer book or two (as well as my beer notebook).  For this trip I took Lisa Morrison's "Craft Beers of the Pacific Northwest" as she had several entries for Albany and Corvallis.  I also consulted The Pocket Beer Guide by Stephen Beaumont and Tim Webb before I left, which mentions Block 15 in Corvallis as an "Innovative brewery with strong barrel-ageing programme". 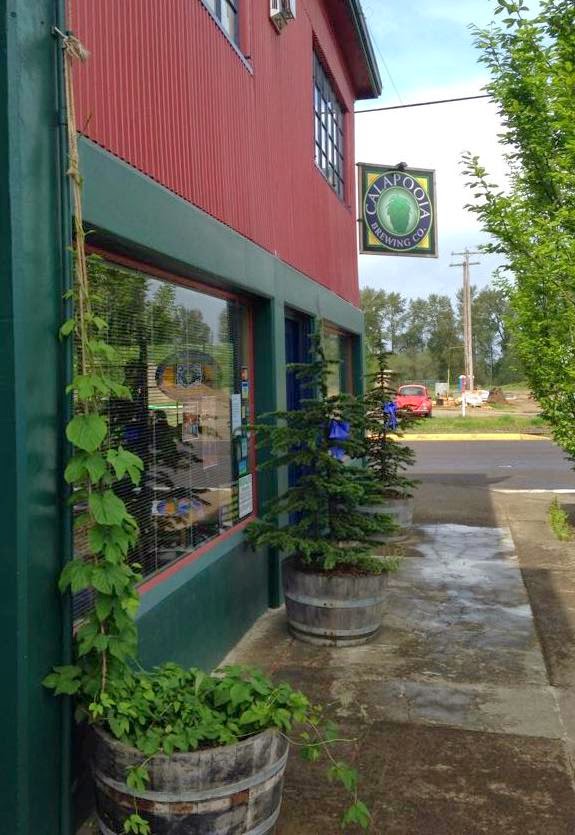 First stop, Calapooia Brewing Co., Albany, OR
Calapooia was the furthest stop from my weekend home, so we started there.  I tried a sample paddle of 8 tasters: River Dog ESB, Santiamber amber ale, Riparian IPA, Devil's Hole Stout, Summit IPA (a seasonal), Paddle Me IPA, Hub City common ale and their Chili Ale. In her book Lisa Morrison suggests you try the Riparian IPA and the Chili ale. I found both to be solid beers, but the Santiamber and the Stout stood out for me. My drinking companion really enjoyed the Hub City, a nice session ale. 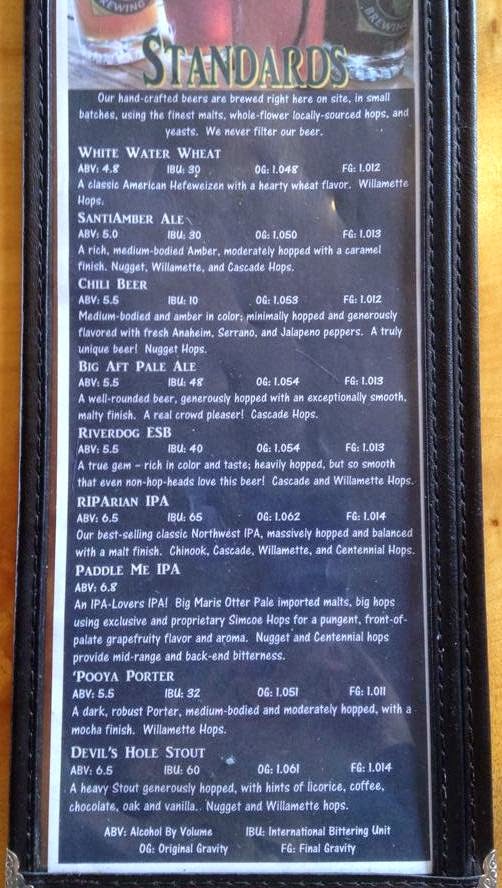 Calapooia boasts a nice-looking patio (it was raining on and off when we were there so we didn't sit out there) and darts. The English pub style menu looked good, but we didn't eat here - it was too soon after breakfast... The tables and chairs were not the most comfortable - kind of a country kitchen style. I can't imagine spending a whole night drinking in them.  Then again, maybe they get more comfortable the more you drink!  Regardless, it was a solid beginning to our crawl. 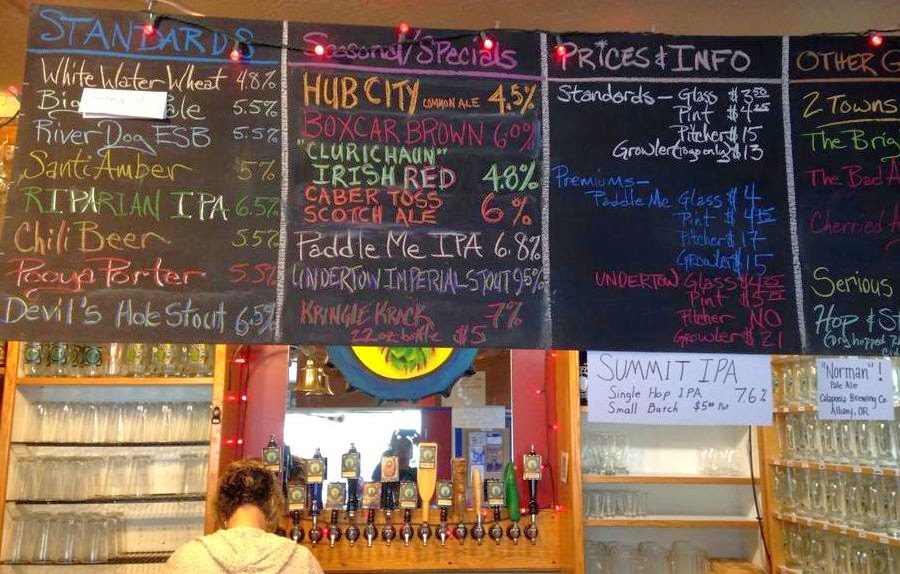 Second stop, 2 Towns Ciderhouse, Corvallis, OR
In a more industrial area of town, the cidery is located in a strip mall which also includes Mazama Brewing. 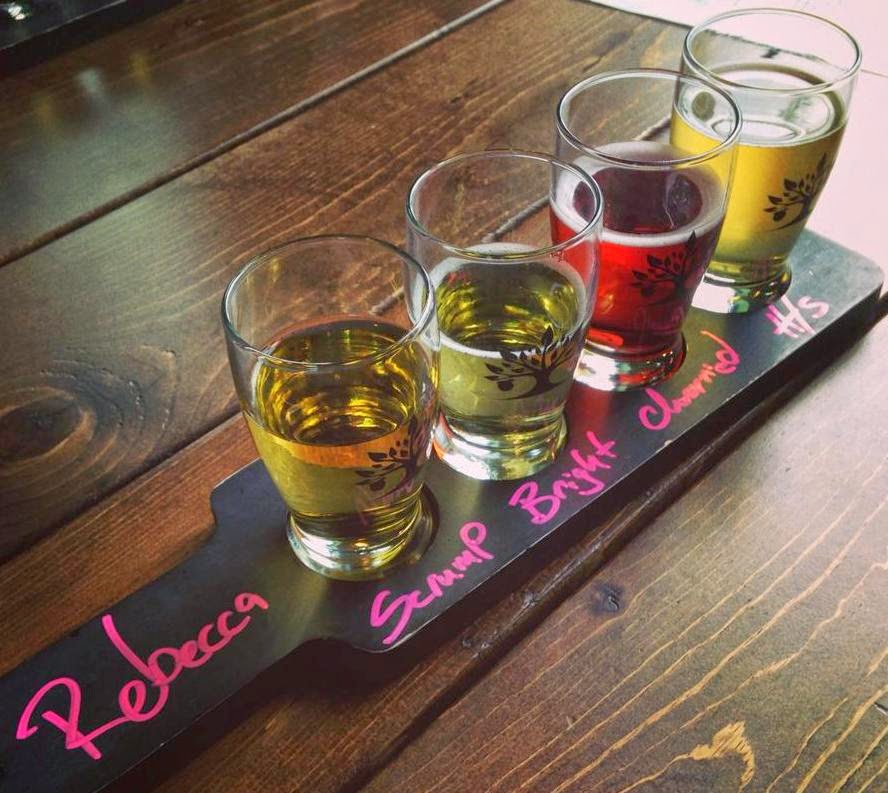 I tried a sample paddle of 4 tasters, the scrump, the bright cider, the recently tapped seasonal cherried away and hop & stalk, a hoppy cider made with rhubarb stalks.  I enjoyed all four of my choices (especially the hop & stalk) and can see why this cidery is so popular with the locals. They say that the taxes are too high for them to consider entering the Canadian market at this time, sadly. 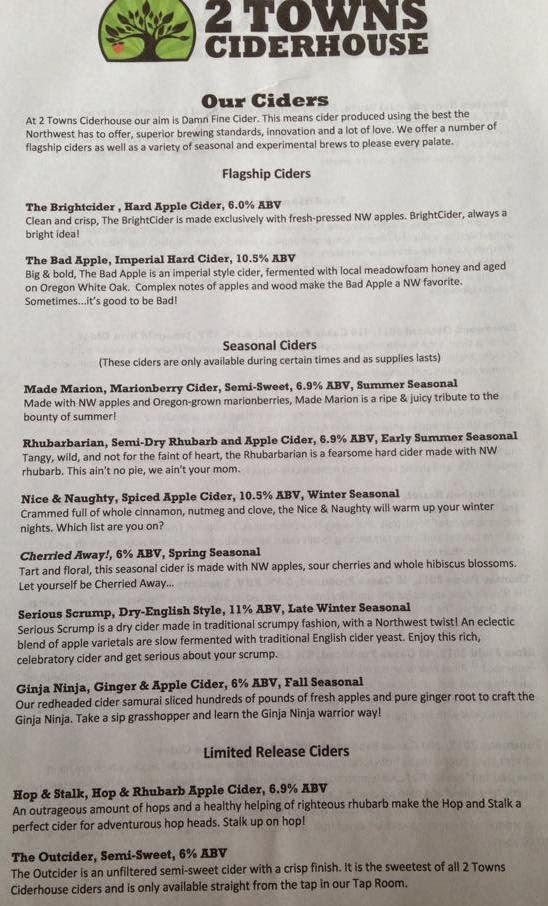 My drinking companion shared her peach, bad apple and hop mead with me. The mead was too sweet for me, as I usually find meads to be. The peach didn't taste much of peach. The bad apple was very satisfying though.  Better watch that imperial cider though - it does not taste like 10%! 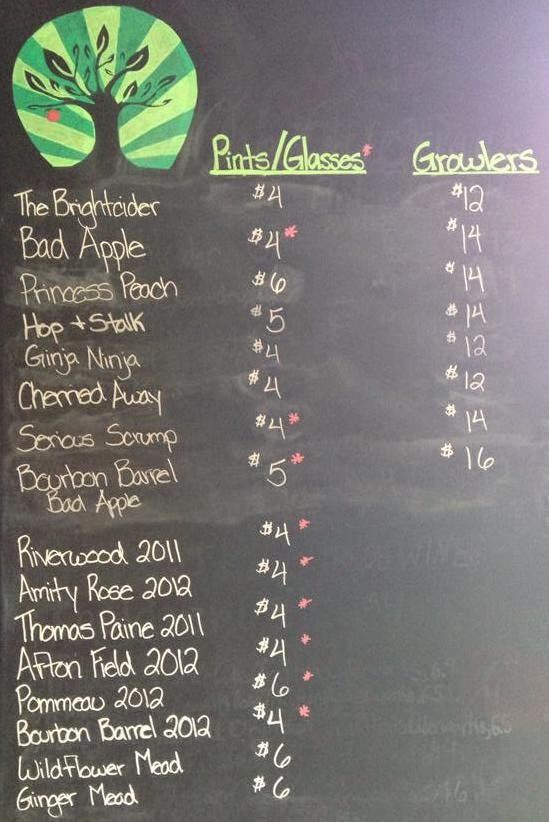 The tasting room is on the small side, but warm and friendly and I could imagine myself whiling away a whole lot of time there if I lived in Corvallis – even though the picnic tables creaked and groaned in a frightening way when I sat down. 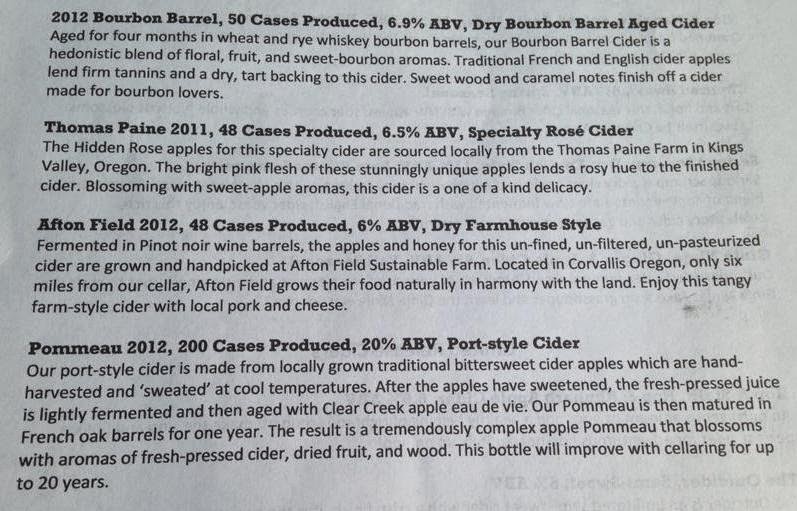 We also made friends at the communal picnic table and they offered me sips of their Pommeau 2012, a port-style cider that smells incredibly boozey, but tastes all apple juice, and Riverwood Orchard 2011 brut cider. I liked the brut so much I bought a bottle to bring home with me. I am also in love with the hop & stalk - so much so that we took a growler to go and I bought a couple of bottles to bring home with me. 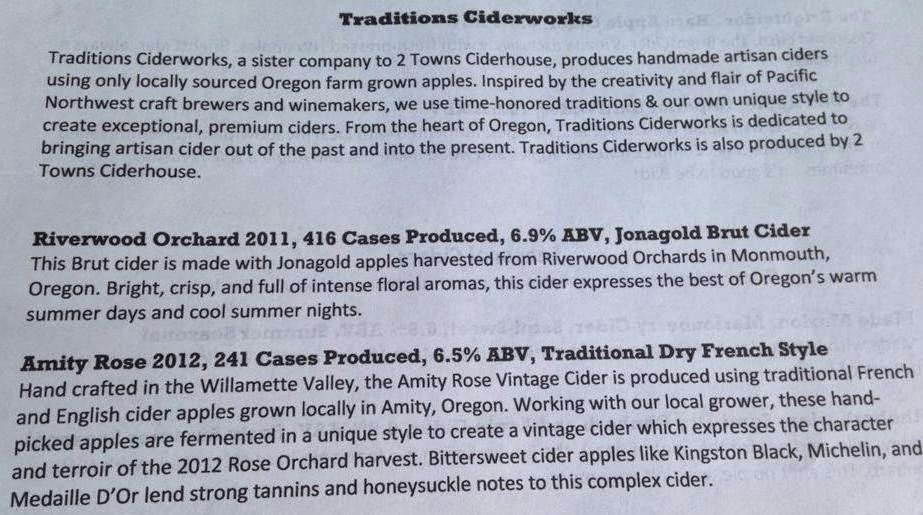 Third stop, Mazama Brewing, Corvallis, OR
Mazama is all about the Belgians. I had a taster paddle of 4 samples, Saison d'Etre which was 6.3 % of dry, peppery saisony goodness. It had a lot of fruit on the nose, but not as much in the taste; the Grand Cru which was a very fruity beer, that I wasn't wild about; the White Wedding, a blend of ½ wit and ½ ipa, which was very dry and bitter but not in the usual ipa-bitter way, more in a sour-wheaty way; and the Sour Sunrise, a peachy lactic subtly sour beer.  Keeping in mind that I am very slowly starting to appreciate the Belgian style beers, I thought these were solid brews. 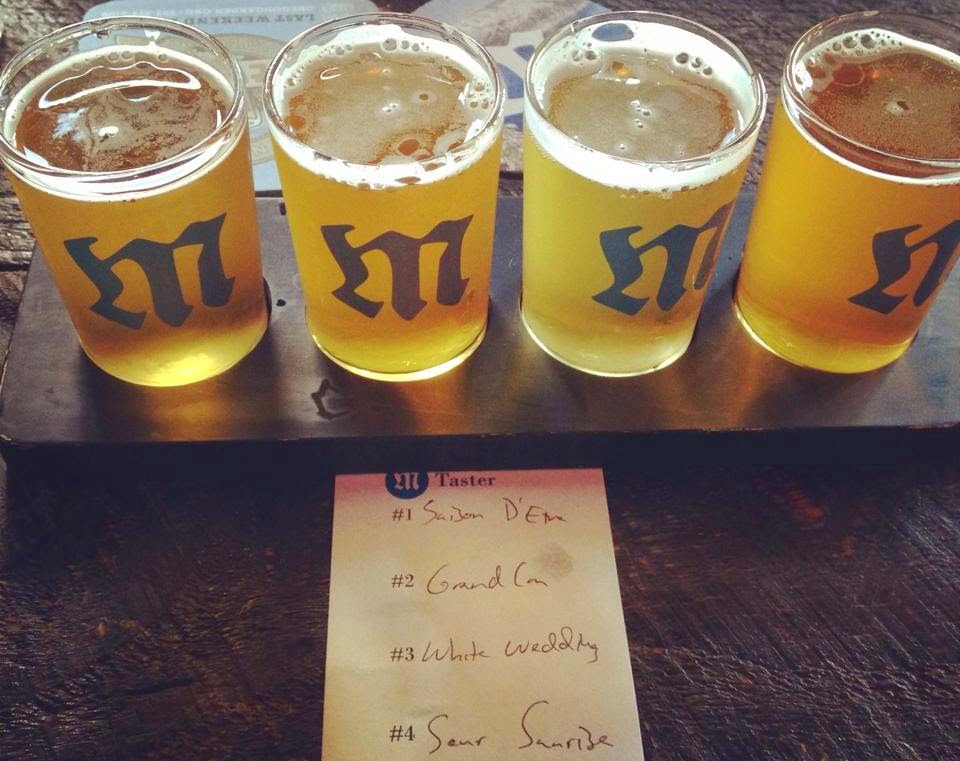 Located right next to 2 Towns Cidery, which was totally hopping on a Saturday afternoon, I was a little bit surprised to be the only people in Mazama. Super friendly service though, so I'm not sure why it wasn't busier. Maybe Corvallis hasn't embraced the Belgians yet?  They should, this place is great! 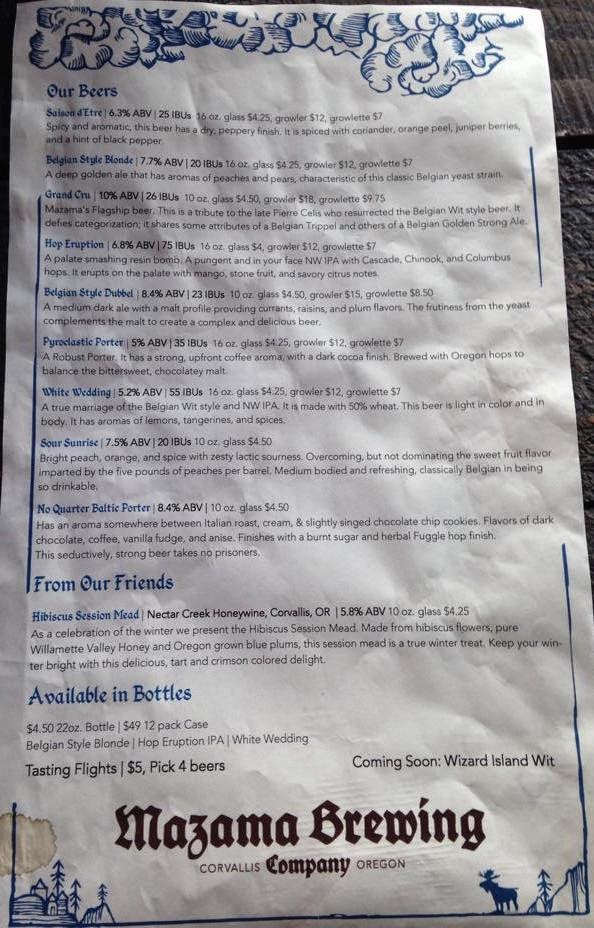 Okay, enough for now!
Tomorrow I will post the other four stops of the pub crawl, but with fewer photos as I sorta forgot to take them as the day/night wore on, and I may or may not have gotten tipsy.
2 towns ciderhouse albany beer beer travelling belgian calapooia brewing co. cider corvallis craft brewed hop and stalk lisa morrison mazama brewing oregon stephen beaumont tim webb