- August 30, 2012
on the heels of their anniversary pandamoneum ipa brew, phillips is back with a fairy tale ipa 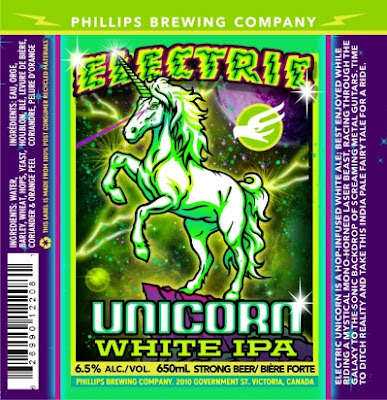 August 30th 2012: In appreciation of International Laser Month we are proud to follow up a giant lazer-eyed mutant Panda with this mono-horned electrically charged laser beast. But while both creatures can sizzle atoms with a glance, the Electric Unicorn White IPA is very different animal than its larger more destructive cousin.

This beer is a white IPA that treads delicately on the palate. Brewed with a generous portion of wheat, the bold hops of the West combine with corriander and a mystical yeast inspired from the East--from Belgium to be specific--to produce a taste that's well balanced and loaded with plenty of Belgian-fruit character. Ditch reality and take this India pale fairy tale for a ride.

If you want your story to end hoppily-ever-after, be sure to grab your Electric Unicorn IPA quick because it's only available for a limited time at finer craft beer stores.
beer belgian coriander craft brewed phillips brewing unicorn victoria white ipa