Showing posts from November, 2010
Show all

things i learned from deschutes

- November 30, 2010
one last post about hopscotch 2010! i was lucky enough to be given a ticket to attend an invite only seminar on "history of deschutes and what the future holds" which involved getting several tasters of jubilale and hop trip while listening to the very entertaining lance mitchell, marketing manager for deschutes some of the high points: the jubilale was intended to run out between christmas and new year's but its so popular that it will be sold out by around december 6th so if you want some for christmas, you'd best be picking it up now! deschutes was founded in 1988 in bend, oregon by gary fish, who wanted to serve local foods and local beers to the locals it wasn't an easy road getting to where they are today 21 years ago all the beer got contaminated and they had to pour all of it out on christmas day and start over their new brew system is german it is 28 feet wide the road to bend is only 30 feet wide, so they got a police escort deschutes
Post a Comment
Read more 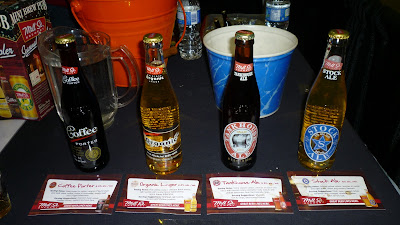 - November 28, 2010
“An intelligent man is sometimes forced to be drunk to spend time with his fools.” –Ernest Hemingway
Post a Comment
Read more 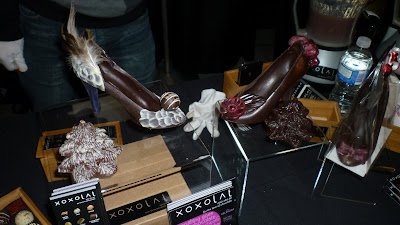 that's right, i'm not done talking about hopscotch yet! how about we talk about whiskey and food today?  and then throw in a little beer chat at the end, because this is afterall a beer blog! hopscotch is known for being a great festival to try new brands of scotch, whiskey and other spirits especially the expensive ones that perhaps you can't afford to try other places i stayed away from most of the hard liquors because i'd been pounding back the beer and just didn't want to prove once again that the old adage "beer before liquor, never siquor" is totally true but.... these guys we met and beer geeked out with totally insisted that we try an ontario whiskey moderately priced and soooo smooth so like the good little sheep that we are, we hustled right on over to the forty creek stall and tried us a couple of their copper pot distilled double barrel aged whiskey the double barrel reserve with deep vanilla notes, toasted aromas of pecan and walnu
Post a Comment
Read more 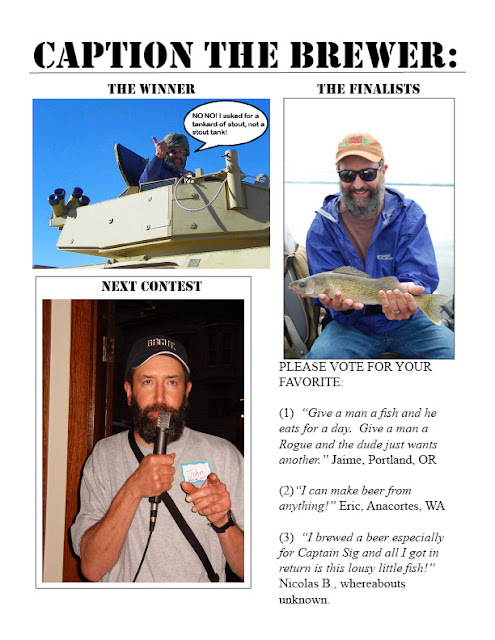 ode to the ipa

- November 27, 2010
at this past week's beernesday i had an ode to the ipa sort of evening it seemed like it hurt my head too much to come up with beers for a sampler and i knew they had some great ipas on tap... so i just went with four pints of four different ipas (and didn't love myself as much as usual on thursday morning when i woke up...) howe sound's total eclipse of the hops:  8%  a supremely well balanced and drinkable imperial ipa weighing in at 90 ibus and 8% alcohol. you know i love this one! so happy to see it back in the rotation at st. augustine's its a damned fine day when a seasonal that you thought was all sold out comes back to let you savour it again! driftwood's fat tug ipa:  7%  a northwest style india pale ale that is characterized by an intense hop aroma i do love this brew very aromatic hop nose not quite as balanced as the howe sound but oh, so delightful to drink! hopworks ipa:  6.6%  rich and resinous flavours of citrus fruit and pine.  the
Post a Comment
Read more

- November 26, 2010
“From man’s sweat and God’s love, beer came into the world.” - Saint Arnold of Metz   The Patron Saint of Brewers
Post a Comment
Read more 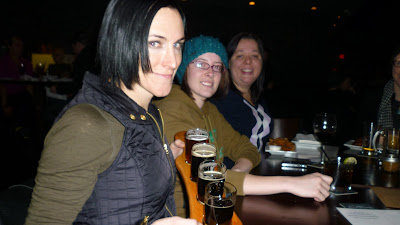 and photos from this week's beernesday, back at st. auggie's as usual!
Post a Comment
Read more

in case you were wondering what to get me for a gift... check this out!  such a funny cartoon.  either a framed print or the greeting cards would suit me just fine. thankyouverymuch!
Post a Comment
Read more

from pike brewery in seattle: By craft brewery standards,  we are but a baby in relation to many of the greatest European breweries. However, in America, we are regarded as a pioneer. At 21, our beers give those breweries from across the pond, a real run for their money. Our customers tell us daily that Pike beers are both first and world class. We may be mature, however,  we still feel like a kid with a future as bright as a Pike Pale. Speaking of which, our coming of age was celebrated for a week, with prices rolled back to opening day prices on Pike Pale, XXXXX Stout, and IPA. Guests were delighted with our special prix fixe dinner, described by various guests as "awesome," "sensational," and "delicious." Our birthday celebration was a movable feast,  with delicious events at which Charles and I presented Pike. At  Lamb Jam   we were so popular  that we had to do a second beer run an hour into the event, confirming what we already knew:  beer goes pe
Post a Comment
Read more

- November 25, 2010
the wonderful, the darned good, the pretty good and the also-rans of hopscotch, according to moi firstly, the beers i've had before and love, so i had them again! efes dark efes pilsner rogue yellow snow red truck limited steam moylans double ipa steamwhistle pilsner the wonderful: odell brewing ipa - 7% with simcoe and amarillo hops, out of colorado - this one has won awards, and i can see why! caldera ipa - 6.1% with cascade hops, out of oregon great divide double ipa - 85 ibs out of denver, colorado stone's ruination ipa - 7.7%, 120 ibus - the stuff of legends i tell ya, legends! stone's self-righteous ale - 8.7% - malty hoppy and makes you believe you could session it... but at 8.7% i think you'd hate yourself later if you did! smuttynose ipa - their single ipa - delightful and deliciously hoppy smuttynose big a ipa - their double ipa - just as delightful and even more hoppy... i might actually like the single better though... ballast amber ale - p
Post a Comment
Read more

Business News and Other Stuff! If you haven't received a newsletter since August, you're not alone... I haven't had time to write one!  Sorry!  Believe it or not I have been "too busy".  Hopefully I can make up for it with this issue.  #1 Favorite Local Microbrewery 2010 Medford Mail Tribune Reader's Choice Awards We are extremely proud and honored to be chosen as the favorite microbrewery in the Rogue Valley by the readers of our local newspaper.  Thank you for your support and your vote.  We can't do what we do without you!   Trader Joes In our last newsletter I teased you with some "big news" coming.  Well we are excited to tell you that you can now find most of our beers in all 10 Oregon Trader Joes stores.  Everyone I've mentioned this to says "tell them to put a Trader Joes here!"  I don't have that kind of influence but I will do my best. Providence Festival of Trees   Once again we are proud to be a donor/sponsor a
Post a Comment
Read more
More posts