Showing posts from September, 2014
Show all

- September 30, 2014
i'll be on cbc radio's on the coast with stephen quinn at 5:50 today talking about fresh-hopped and oktoberfest beers 88.1 fm 690 am in vancouver and then i'll be heading right off to craft beer market for the stanley park beer pairing dinner it's nice to be invited to such events i'm looking forward to giving craft beer market another chance (it did not wow me at all on my previous visit, so i hadn't been back since) and tasting stanley park's two new beers (pale ale and winter ale) i haven't had any of the shadow brand's beers lately, so i'm interested to see what they're up to these days and meet the brewer
Post a Comment
Read more

- September 29, 2014
belgian beer pipeline can we get enbridge to build one of these instead?? shame on you labatt's still trying to convince the gullible that shock-top is craft brewed vintage pics of vancouver's brewing scene stone brewing is going to be available in bc once again!  yay! the serious down-side to the legislation allowing beer sales in grocery stores and unfettered re-location of existing licences under an 8 year moratorium on issuing new licences - small communities may see their licences bought up and moved elsewhere
Post a Comment
Read more 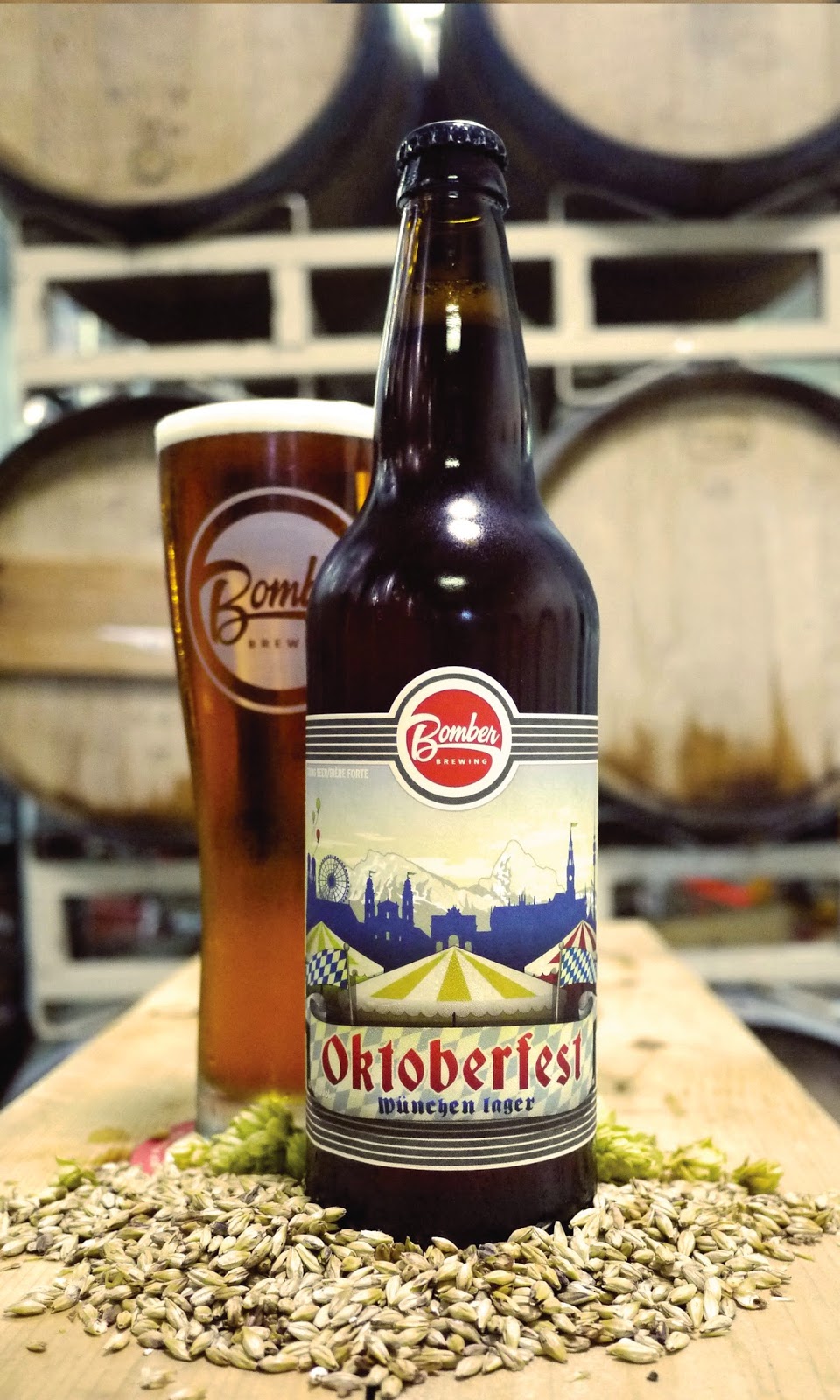 BOMBER BREWING'S LATEST RELEASE IS ALL ABOUT AUTUMN OKTOBERFEST München lager : This German lager has a tad more octane than our Märzen and as a nod to fall and all its bounty, is more golden in colour. A dry finish is produced by use of a blend of German lager yeasts and the body comes courtesy of  Munich and Vienna malts. Why not soothe your medieval soul’s desire for an autumnal celebration?! Just don’t delay – quantities are limited.  About Oktoberfest : Appearance: Deep golden amber. Aroma: Strong aroma of Munich and Vienna malts along with traditional Hallertau hops.  Flavour: Sweet maltiness and light toasty character up front finishing clean and dry with moderate hop bitterness.  Mouthfeel: Medium body, medium-high carbonation. ABV = 6% Original Gravity = 1.060 Bitterness = 20 IBU Colour = 7.5 SRM Oktoberfest is available now in kegs, 650ml bottles, and on tap in the Bomber Brewing tasting room. To celebrate the launch of this
Post a Comment
Read more

- September 25, 2014
you're coming to the bc beer awards, right? hosted by the awesome stephen quinn and full of delicious beers i see absolutely no reason for you not to go! ticket prices go up on october 10th so get your tix now Vancouver , BC (August 19, 2014): The 5th Annual BC Beer Awards & Festival is set to return to Vancouver on Saturday, October 25, 2014 from 4-9pm at the Croatian Cultural Centre ( 3250 Commercial Drive ). The signature consumer tasting event of BC Craft Beer Month , this festival celebrates the very best in craft brewing from across the province. A one-day only event, it features both the craft beer festival and the BC Beer Awards ceremony hosted by Stephen Quinn. There will be 4 Education Classes available this year at a cost of $15.00 each, taught by some our industry’s top talents. New this year is a snazzier event. There will be beer, balloons, glitter, a photobooth, and there may even be a crown. Early bird tickets are $27 (plus tax) for the BC Beer Aw
Post a Comment
Read more

A New IPA Straight from our Hop Devolpment Lab   September 15th 2014: Tucked away in a quiet corner of Phillips Brewing Co is a development lab dedicated to exploring the delicious world of hops. It's a place where different hop combinations yield all sorts of unique IPA hybrid brews which are released in the Hop Box under the Area 52 series. Octofox was one of the early specimens to come out of the Area 52 program, and it was so good we've opted to put it out in its own bomber!  It pours a deep golden colour with a soft marshmallow white head.  Full bodied and bright, flavours of citrus are balanced against a pine-bitter hop profile that finishes dry. Octofox is selectively brewed to be broadly enjoyed. Octofox is available from your favourite Cold Beer & Wine Stores now, and BC Liquor stores later this week.     13 Years, 13 Knots, 1 Special Gift   Sep
Post a Comment
Read more

- September 22, 2014
parallel 49 celebrates after their win at whistler village beer festival do you want to see growler fills outside of breweries ? here's camra's take on why you might actually not want such a thing need help planning your next beercation ?  the travel channel can help beermebc's view from gcbf pumpkin beers - love em or hate em? i'm on the dislike side... most of them are just too pumpkin pie spice and not enough actual gourd whistler village beer festival as seen by go-pro molson lays off staff and blames craft beer might be the best thing ever to be blamed for! joe wiebe on the best of craft beer in vancouver and more on the debate over craft beer in cans
Post a Comment
Read more

- September 21, 2014
Kooner Hospitality Group is hosting two Moa Brewing Longtable Dinners this month! The dates are as follows: Pumphouse Taproom on September 26 th at 7:00pm Hop & Vine Taphouse on September 27 th at 7:00pm The events will feature five fine dining courses created by Executive Chef Daniela Iaci paired with five of Moa Brewing’s finest. i will be attending the pumphouse dinner i must admit i am not at all familiar with moa brewing , so i'm very interested in trying the beers and the pairings from marlborough, new zealand, which is better known for its wines than its beers, moa takes advantage of all the wineries around and uses sauvignon blanc and champagne yeasts in some of their beers
Post a Comment
Read more

- September 20, 2014
three new limited editions from dead frog i have had the big stump spruce golden ale and love it! the other two are chillin' in my fridge as i type this: Dead Frog Brewery is pleased to announce the release of its newest ale, the Big Stump Spruce Golden Ale . Harking back to Captain Cook's 1778 arrival in Nootka Sound, this 6.5% golden ale incorporates the terroir of the Fraser Valley with Sitka spruce tips harvested a mere 10 minutes from our brewery. Our brewer, Nick Fengler, was inspired by forays into the old growth forests of British Columbia. We hope this spruce ale will evoke similar images of our verdant land fed by rains nourishing the windward slopes of the Coast Mountains, trickling through the luxuriant growth and into the mighty Fraser River from which we draw our water. Description A perfectly balanced golden ale brewed to celebrate summer on the West Coast. Fresh-picked spruce tips and Simcoe hops provide a tropical pine aroma and crisp bitterness
Post a Comment
Read more

love letter in a bottle 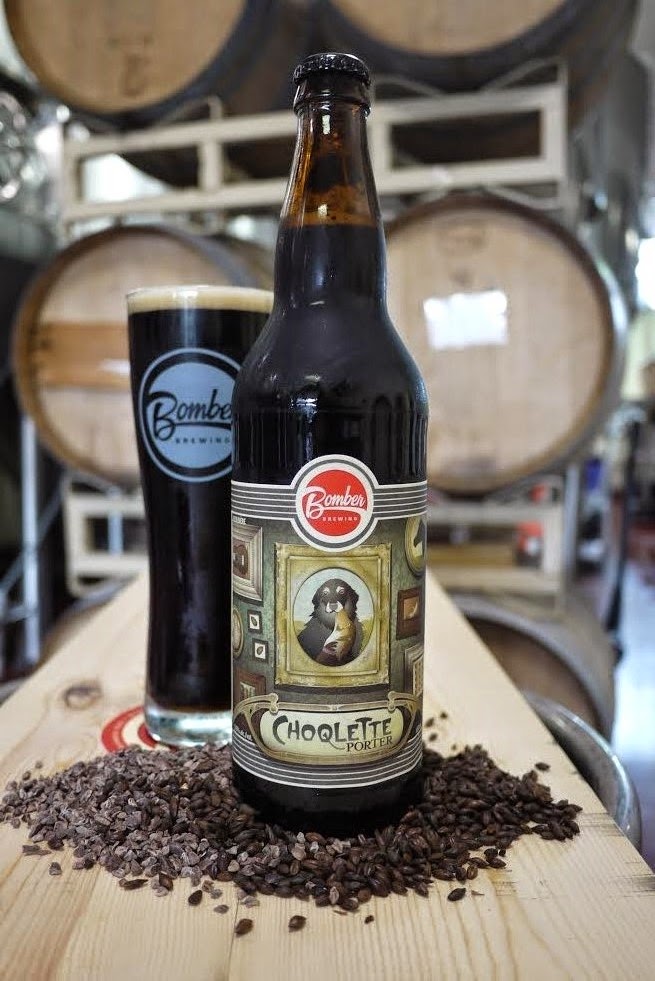 new from bomber brewing, the choqlette porter is the perfect fall beer deep, dark and delicious oh, and chocolatey!          BOMBER BREWING'S NEW SEASONAL IS A LOVE LETTER IN A BOTTLE CHOQLETTE PORTER: a beer lover pays homage to his wife by taking one of her favourite things - chocolate - and marrying it to one of his own.  And while the bottle's l label denotes cherished pets and personal mementos, his real gift to her is inside:  three chocolate additions - chocolate malt, cocoa powder in the mash, and cocoa nibs in the fermentor - make this roasty, easy-drinking porter über chocolatey. It's a declaration not only to her, but to chocolate aficionados and porter drinkers alike: prospective lovers, don't write poetry - bottle up your love ! About Choqlette Porter: Appearance
Post a Comment
Read more

Commons & Breakside Takeover Portland Craft! Sept 18th - 6pm - No Tickets Required Join our team as we hang out at Portland Craft for the night with our Portland Pals! Jacob and Fred from Breakside will be here as will Josh from The Commons! We've got 5 beers from each brewery on tap, including some very rare or never before seen beers.
Post a Comment
Read more

- September 17, 2014
these are my notes from yesterday's on the coast beer column wherein i made stephen quinn taste hop elixir (i am so very cruel to him): This is "Hop Drop", a hop elixir/hop liqueur made by Phillips Brewing in Victoria .   They made it to go along with their 13 th anniversary brew, called 13 Knots in a Hangmans Noose.   The beer is an 11.9% imperial ipa, which if you add the 29% elixir to it, bumps up to a 13% even hoppier beer. “Hop drop is an artisanal hop liqueur crafted to celebrate the hop flavours that we covet in our beer.   We distilled real hops into an incredibly potent hop elixir, where explosions of fresh pine and bright bitterness are balanced in a blanket of soft sweetness.   Its depth of flavour is robust enough to enjoy on its own poured gently over ice, or it can be ‘dropped’ into another beer to instantly raise the ABV and infuse bright hoppy flavour.”   The elixir will eventually be available on its own from Phillips’ new Fermentorium on a year-r
Post a Comment
Read more

- September 16, 2014
i'll be on cbc radio one at 5:50 this afternoon on the coast with stephen quinn talking about beer, beer and, oh, beer not to mention phillips' new hop elixir 88.1 fm 690 am in vancouver
Post a Comment
Read more 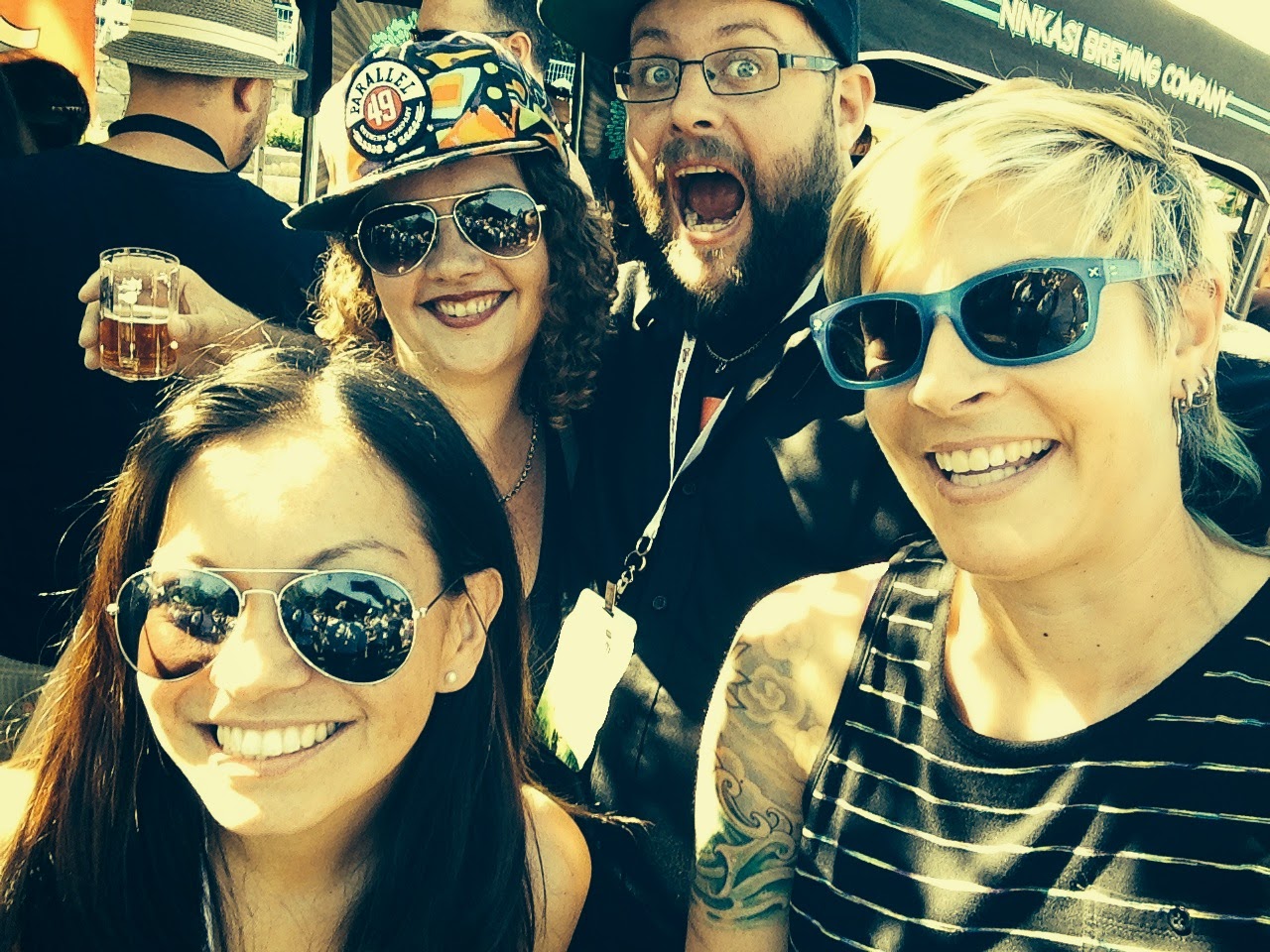 i was a little better about taking photos this weekend i actually got one selfie and a couple of festival shots go me!   whistler beer fest is a whole lotta fun but a festival for beer nerds it is not they don't provide rinse water for the pourers, there's no listing of beers to try on the plus side it sure is pretty!﻿ because there was no beer guide, i didn't keep track of the beers i tried i do remember trying bomber's new choqlette porter - delicious and quite a few imported american beers that you just don't get here regularly like oskar blues﻿ will i go again next year? i think that i will - it was good times indeed will i go for the whole weekend? you know, i think i just might (i was only there for saturday overnight this year)﻿
Post a Comment
Read more 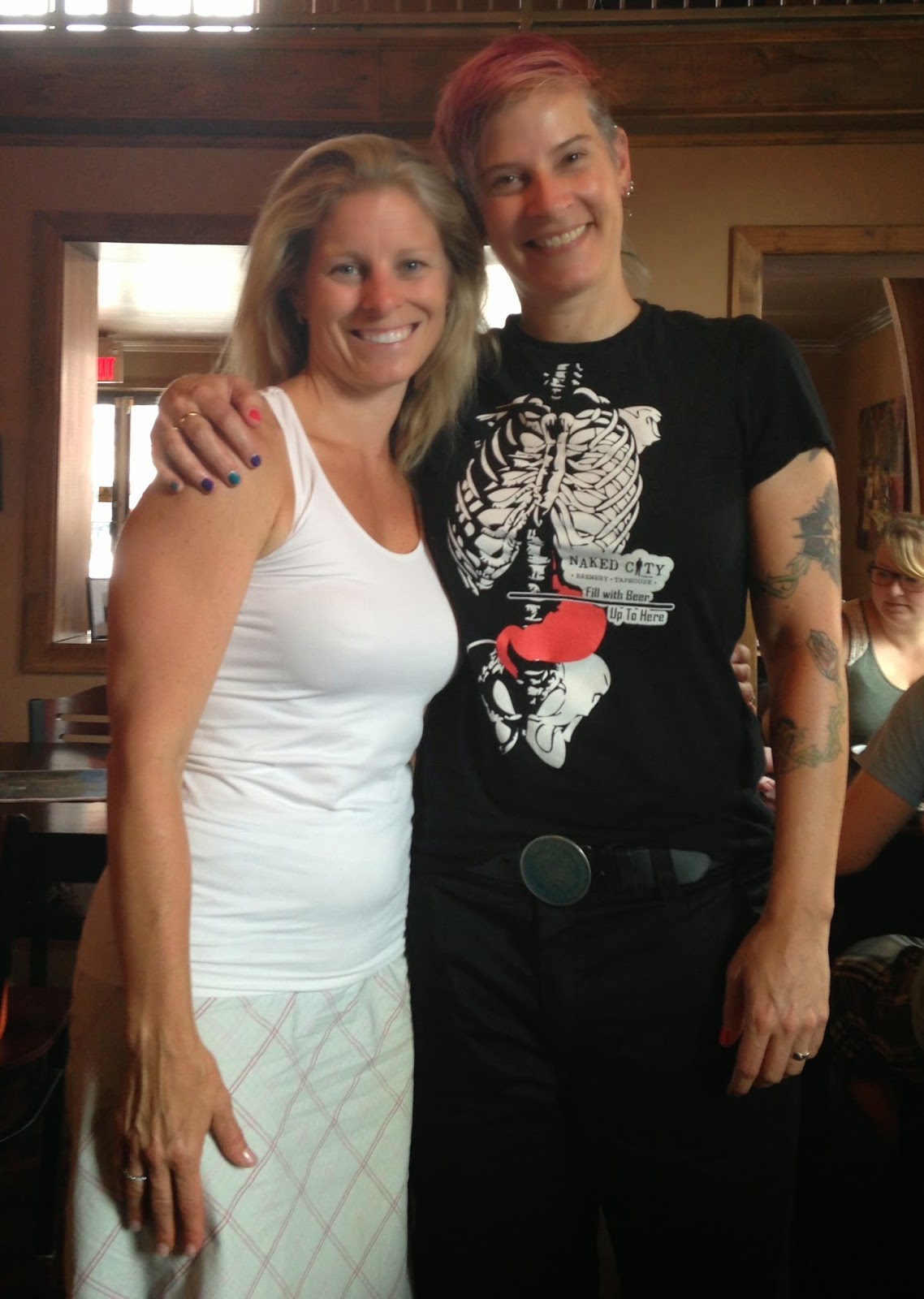 10 stark truths (and we're not talking game of thrones here) about dating a beer nerd breakside brewery liquid nitrogen frozen fresh hop beers and a reminder that breakside and the commons are having a tap takeover at portland craft on september 18th (aka thursday) a sneak peek at steel toad the strait loves stateside craft also, a very happy birthday to one of my oldest friends today oldest in time known, not age! not that she reads my blog, but whatever, happy birthday goog!
Post a Comment
Read more
More posts