Showing posts from April, 2017
Show all

- April 27, 2017
my notes from tuesday's beer column on cbc radio one's on the coast with stephen quinn: The pace of brewery openings appears to be slowing somewhat in Vancouver.  But there have been several brewery openings already this year across the province – among them Back Roads Brewing in Nelson, not to be confused with Back Country Brewing in Squamish!  And Highway 97 Brewing in Penticton, Gibsons Tapworks, and Twin City Brewing in Port Alberni also opened. Existing breweries continue to expand as well, so the thirst for craft beer isn’t waning!  I think there is still room in Vancouver’s market for more craft breweries, and definitely there is a lot of room in many underserviced areas in the province. So far most of the local breweries share a common model.  Some of the exceptions being Callister’s cooperative set-up, as mentioned a moment ago, Factory’s contract model and Howe Sound’s ownership of R&B Brewing, where they continue to make R&B brand beers, alongsid
Post a Comment
Read more 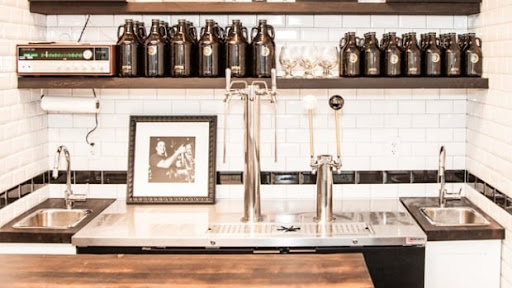 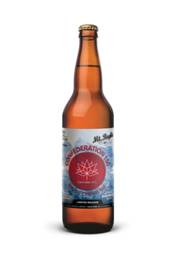 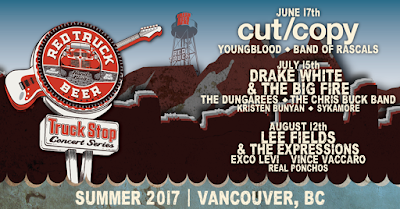 For Immediate Release Monday April 17 th , 2017. Vancouver, BC Truck Stop Concert Series at Red Truck Brewing Returns for a Third Great Year The 2017 model is set to be the best yet with three summer outdoor concerts With two years on the clock, the Truck Stop Concert Series at Red Truck Beer is already a can’t-miss Vancouver summer highlight, and it’s returning for a third year with three great shows in East Vancouver’s historic Brewery Creek neighbourhood. Once again, Red Truck will load up the all-day excitement of a music festival and drop it in the heart of Downtown Vancouver. This year’s schedule will launch with a June 17 th synth-pop show headlined by Australian legends Cut/Copy . Cut/Copy are a festival favourite who’ll be playing classics from albums like In Ghost Colours and Free Your Mind along with tracks from their upcoming album. On July 15 th , the country and Americana showcase takes over with Drake White and the Big Fire at the top of the po
Post a Comment
Read more

- April 24, 2017
FOR IMMEDIATE RELEASE     Back Aboard with Bowen Island Brewing Bowen Island Brewing Co., a BC Craft Beer Veteran is hitting shelves with a new look and new recipes. Vancouver, BC (April 20, 2017) Bowen Island Brewing is proud to announce an exciting fresh look for the 30+ year old craft beer brand. The Bowen team has been working with renowned Hired Guns Creative (designers for Old Order Spirits, Driftwood Brewing, Coast Mountain Brewing) to reinvigorate the brand’s visual presence and working with Brewmaster Joe Goetz (formerly with Granville Island Brewing) to develop a new recipe and tweak some of the existing recipes ones. “For Bowen Island Brewing, we designed each beer to reflect a different aspect of island life. All these points of view come together to create a bigger picture: the "brand world" of Bowen Island. The updated branding and illustrative style of the can designs elevates the brand and sets the stage for expansion in
Post a Comment
Read more

- April 13, 2017
The 22 nd Annual Okanagan Fest of Ale ™ A Huge Success For Immediate Release – April 10, 2017 Penticton, BC The weather didn’t dampen the spirits of craft beer and cider enthusiasts who flowed into Penticton over the weekend for the 22 nd Annual Okanagan Fest of Ale.  Organizers of the event are calling this one of the most successful events to date. 65 craft brewers were on hand this weekend to showcase over 175 craft beers and ciders to over 5,000 guests.  “This is by far the largest collection of breweries and cideries that we’ve hosted and one of the best turnouts we’ve had,” says John Cruickshank, Okanagan Fest of Ale Society President.  “We are fortunate to attract some of the best brewers to the event and patrons with a keen interest in craft beers and ciders.  That combination had a really positive impact on the overall atmosphere at the event. The energy was great. Guests had a fabulous time enjoying the selection of beverages, culinary options and live e
Post a Comment
Read more
More posts