Showing posts from April, 2013
Show all

and i'm back! a coupla links for you: bc's beer boom - breweries in the province and breweries in vancouver jan zeschky's  vcbw preview and the official vcbw website so you can get your tickets! mention of a pair of new beers: Vancouver Island Brewery   APRIL 29, 2013 Media Release! Greetings! Art, music and beer -  they just seem to go together... Vancouver Island Brewery Releases Concert Series! Available April 29th, 2013      Concert Series Bomber No. 1                     Concert Series Bomber No. 2 Vicfest Festival Ale             VI Musicfest Festival Ale Why brew a Festival Ale? This festival ale is brewed in celebration of the amazing art, music and culture here on Vancouver Island. We're proud to support local cultural events that strengthen our island's unique collection of bouncing souls and kindred spirits. These events are a part of our community and highlight the vibrant lifestyle we all enjoy here on Vanco
Post a Comment
Read more

- April 23, 2013
that's it! i'm outta here! i have to go back east for a week for some family stuff, so there won't be anything new on here until i am back in a week or so but before i go.... the fundraiser for driftwood brewer tim fukushima at the biltmore on sunday afternoon was a huge success raffle prizes galore, awesome cheap pints and the kind of spirit the craft beer community should be insanely proud of (and if you happened to miss my show last week on cbc radio, you can still check it out by going to on the coast and picking the april 16 edition - i'm the last 7 minutes of the show)
Post a Comment
Read more

- April 22, 2013
we all knew it was true, drinking beer makes you smarter new beer festival in toronto features some local favourites yankee stadium pressured into removing craft beer sign on beer stand that was not selling craft beer seen as a win by some, as proof that yankee stadium needs craft beer by others 14 geekiest beers on the market 3 gateway beer styles to convert mass market drinkers to craft merely a sip of beer starts the good feelings - go dopamine! (however, this is probably bad news for alcoholics)
Post a Comment
Read more

- April 19, 2013
the cask at the yaletown brewpub last night was stellar! brown ale done with raspberries the raspberries were subtle and not sweet and they put such wonderful flavour into that delicious brown ale definite win! the cask at the railway on tuesday was also a good one central city's amber ale dry-hopped with simcoe so satisfying!
Post a Comment
Read more

- April 18, 2013
fun and fabulous beers available at legacy liquor store in vancouver: Lighthouse Brewing Barnacle Wheat IPA - $7.25 The breweries on Vancouver Island certainly know what they’re doing, and this IPA is a perfect example. Golden in colour with a nose of spice and pepper, and a palate that continues to profile spice and floral hops, this dry piney IPA shines when enjoyed with Thai and Indian food. Powell Street Brewery Belgian Witbier - $7.95 Local boys at Powell Street have produced a perfectly spiced beer for the burgeoning summer season, with orange peel, coriander, cardamom and ginger all coming together for a sweet Easter-bread aroma. An off-dry finish is preceded by ginger and spice on the palate. Driftwood Brewery Clodhopper - $8.95 A traditional Belgian-style Dubbel brewed on beautiful Vancouver Island, Driftwood has gone the extra mile with this brew using locally grown malt from the Sannich peninsula. Who’d have thought you could find a bit of Belgium right here on our doors
Post a Comment
Read more

- April 17, 2013
in case you missed me on the radio last night here are my notes from my "spring beers" chat with stephen quinn: The warmer weather makes you want to drink a lighter beer, to start putting aside those stouts and porters in favour of beers with crisper finishes and flavours that dance on the tongue. This is traditionally the time of year when lagers come to the forefront of beer consumption. I think the word of the season moves from "comforting" or "warming" to "refreshing" There are two traditional beer styles that are associated with Spring.   Maibock, or May bock, which is brewed specifically for springtime consumption and Saisons which, before the invention of refrigeration, were brewed in the Spring to be consumed over the summer when weather got too hot to support brewing. Maibocks are light in color with that refreshing lager crispness, but they have a heavier body and generally higher alcohol content than other light colored beer s
Post a Comment
Read more

- April 16, 2013
hey, hey! its one of those tuesdays! the ones where i get to talk beer with stephen quinn on cbc radio one at 5:50 this evening i'll be talking about spring beers
Post a Comment
Read more

- April 12, 2013
lots going on in the beeriverse! sierra nevada's founder, ken grossman , in a nice long interview three craft beer trends to watch: collaboration brews, expanding industry means more jobs and women are embracing craft the big boys are running scared - and taking over craft breweries, when they're not too busy coming up with new "craft" products part one of the lovely lynn's blog on converting your friends into craft beer drinkers u.s. beer is inspiring british brews
Post a Comment
Read more

- April 11, 2013
new and fun beers available at legacy liquor store in vancouver: Phillips Double Dragon Red Ale - $6.95 A gem from Vancouver Island, this Imperial Red Ale pours dark amber with a frothy head. Grapefruit and malt dominate the nose while nuts and toast are found on the palate. Medium-bodied and textured, it satisfies the greatest thirst. Fort Garry Kona Imperial Stout - $7.55 From Winnipeg, Manitoba, this roasty Imperial Stout boasts notes of coffee and malt to match its dark mocha appearance, with more caramel and coffee taking charge in the flavour department. Medium-bodied and smooth, this Brewmaster Series beer is a solid contender in the realm of stouts. Phillips Twisted Oak Barrel Reserve Red Ale - $7.85 Aged in freshly emptied rum barrels to give it a deep amber hue, this brew wraps lightly roasted malts in sugarcane sweetness. It’s not often that a beer like this comes around, so don’t miss out. Enjoy in a snifter at cellar temperature.
Post a Comment
Read more 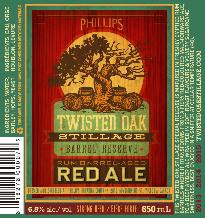 Double Down on Red 2 seasonal red ale releases April 11th , 2013 - We doubled down, spun the brewlette wheel, and landed on red--but these two red ale seasonal releases are no gamble. The Double Dragon Imperial Red Ale is back in the ring to go another round with your taste buds, while the Twisted Oak Red Ale , carefully crafted and slowly conditioned in freshly emptied rum barrels, makes its debut. On Thursday April 11th from 4pm-6pm, we'll be hosting a special tasting of this primary coloured pair, so don't gamble on what may be your only chance to try these special releases from the tap. Here's a little breakdown of each brew: Twisted Oak Red Ale - 6.8% - 650mL This Twisted Oak special release is matured in freshly emptied rum barrels, where it transforms from fiery red colour to a deep amber, and is wrapped in soft roast flavours and velvety sugarcane sweetness. But unlike its Scotch-Ale cousin, this Twisted Oak release is on
Post a Comment
Read more

- April 09, 2013
in case you missed me last tuesday on cbc radio one's on the coast talking with stephen quinn about all the different sizes of bottled beer, and why the bomber is not, in fact, the wine-ification of beer, you can still catch the show by clicking here and choosing april 2nd. the beer segment is right at the end - fast forward to about 7 minutes before the end if you just want to listen to me!
Post a Comment
Read more

- April 08, 2013
can't-miss beer cities around the world according to zagat and three of them are in america no canadian cities made the cut rick green tries to find good beer on his travels or, why cheap cold beer is just that imagine a place where the city actually helps a brewery grow st. paul minnesota is that place new beer cans with big lids are you going to drink from them??
Post a Comment
Read more

- April 04, 2013
fun beers available at legacy liquor store in vancouver: Parallel 49 Brewing – From East Van With Love - $13.75 A collaboration between Parallel 49 and Gigantic Brewing is responsible for this Bourbon Barrel-Aged Maple Stout. Rich and dark, with notes of maple subdued by barrel-aging, makes this beer a must for your cellar. Alameda Brewing – Bad Bunny - $7.75 Easter may be in the rearview, but Alameda is leading the pack with Bad Bunny, a lightly malted and hopped Cream Ale with subtle malt and fruit on the nose. On the palate fruit dominates, making this an excellent Cream Ale by any standard. Tree Brewing – Captivator Doppelbock - $7.75 Once a staple of fasting monks, this style of beer has recently exploded in popularity in the modern world. Sweet, malty and lightly hopped, this strong ale is full of dark fruits and biscuit, making it an excellent variation of a European classic.
Post a Comment
Read more

- April 03, 2013
my notes from yesterday's on the coast beer column on the subject of bombers: i have talked a lot about growlers, those lovely 64oz bottles you can fill at a brewery and take home with you to enjoy, but what are all the other types of beer bottles called? and why do we need so many different sizes?   growlers are the big boys of beer bottles. weighing in at 64 oz or 1.89 litres   next down are what are often called "growlitas" or "growlettes", weighing in at a litre. at places that are willing to fill these bottles, they are treated the same as a growler. Tofino Brewing in Tofino offer growlitas as well as growler fills.   also in this category are howe sound's swing-top 1 litre bottles, available for retail sale at Howe Sound Brewery and most liquor stores. the advantage of buying this size of bottle with a reclosable top is being able to pick your serving size of beer and save the rest for later. Also very good for sharing. The bottl
Post a Comment
Read more

- April 02, 2013
its the best kind of tuesday! the kind where i'm on cbc radio's on the coast with a well-rested stephen quinn at 5:50 p.m. i'll be talking about bombers yup those 650 ml bottles that recently got accused of trying to "winefy" the beer world 88.1 fm 690 am
Post a Comment
Read more

- April 01, 2013
it may be april fool's day, but these are real links and i do really love them! its about time!  craft beer replaces wine as young women's go to drink wanna start a brewing business?  portland state to offer a course on the business of craft brewing joe wiebe's book, craft beer revolution , is coming - publication date of may 2013 top 10 so-cal beers  according to the l.a. times vcbw collaboration brew for 2013
Post a Comment
Read more
More posts