Showing posts from February, 2018
Show all

BOMBER BREWING’S FUNDRAISER INSPIRED BY THEIR LOVE OF THE GAME

- February 26, 2018
February 26,2018 — Bomber Brewing is gearing up to host its 4th annual Beer League BASH, on March 10th. The idea came from three die-hard hockey fans, who were looking for a way to give back to local kids. They came up with an event that’s part craft beer festival, part brewery hockey tournament.  “It’s all about giving more kids the chance to benefit from hockey,” says Cam Andrews, Creative Director of Bomber Brewing. “We all grew up playing it, and just got so much from it. Every kid should get that chance.” In the past couple of years, the event has raised $5,000 and a ton of gear, all to help kids develop both on- and off-ice skills with coaches and mentors.    At the event, seventeen local craft breweries will be serving up cans on the Britannia Ice Rink concourse, while brewery teams battle it out on the ice below in a round-robin tournament to win the coveted Beer League BASH trophy.  But with 100% of the proceeds going to the Britannia After School Hockey Program
Post a Comment
Read more 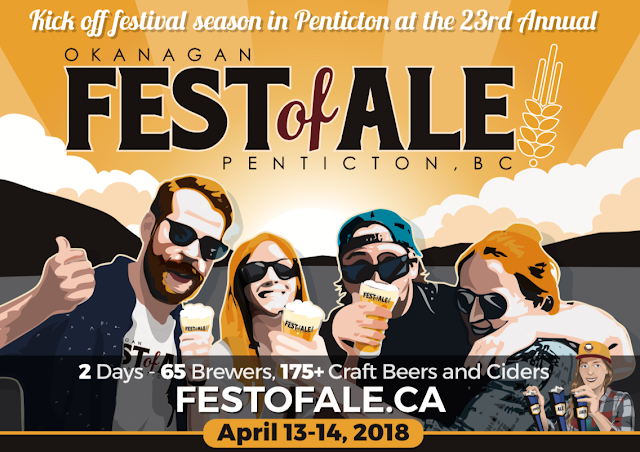 Whether you’re a seasoned craft beer connoisseur or a craft brew newcomer you won’t want to miss the 23 rd annual Okanagan Fest of Ale taking place in Penticton April 13 & 14, 2018.  A favorite for patrons and participants alike for over 20 years, this “must attend event” is one of the largest and longest running beer festivals in the Pacific Northwest. The 2-day festival features 65 brewer booths and over 175 craft beers, craft ciders, and cask ales to enjoy, fabulous food, live entertainment and more. Guests of the #FestofAle2018 can look forward to tastings from 68 breweries from BC and beyond.  10 of the breweries participating are new to the event, 5 will be featuring craft ciders, and a selection of gluten free beers will be available. Find a favourite? The crew from Clancy’s Liquor Store will be setting up a pop up shop making it easy for guests to take home their favourite festival finds. 12 local restauranteurs will be serving up an amazing array of delici
Post a Comment
Read more
More posts