A beer by any other name:
sexism in craft beer labels 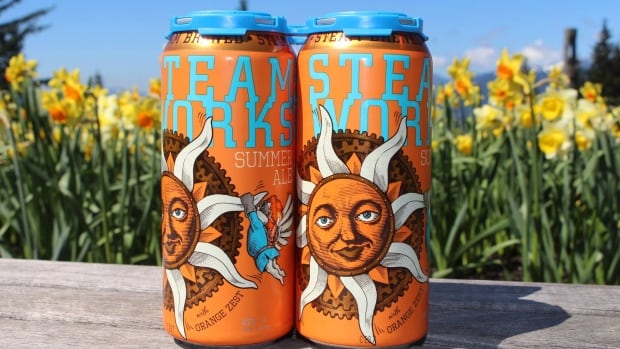 Steamworks Summer Ale is one of Rebecca Whyman's beer picks for this week, and she highlighted the sunny label as one of the things she likes about it. (Steamworks Beer/Facebook )

It is getting harder and harder to find unique beer names as more breweries enter the market, but the supply of offensive and sexist options seems endless, according to CBC On The Coast's beer columnist.
Rebecca Whyman says, in many cases, attempts at puns or edgy labels can miss the mark.
"Brewers love their puns," Whyman said. "Some of those edgy names are actually passing edgy and going into the land of offensive."
She told On The Coast host Stephen Quinn that she wouldn't name any examples of particularly offensive labels on air but described them as overly sexualized.
There are lists of names shaming the worst offenders, she said, for those who are curious.
"There are some racist names as well, but sexist seems to be the place where most people are taking their names," Whyman said.
Roughly, 70 per cent of craft beer drinkers are men, Whyman said and so most of the marketing is aimed at men.
With their smaller budgets, she added, craft breweries tend to not be as overtly sexist as mainstream beer, but it is still an underlying trend.
"Craft beer is light years ahead of mainstream beer in terms of its inclusivity, but there is still the whole gender inequality," Whyman said. "We're not seeing the same ads from there, but we are seeing a lot of labels and beer names that are following the sexist suit."
The number of women drinking craft beer is rising quickly and competition for their beer dollars increasing, she added, and so sexist labels are a choice that could cost breweries a significant customer base.
"There are so many other ways," Whyman said. "Have a brightly coloured label, use really edgy artwork that doesn't include anything that is controversial. You can still stand out."

Here are the top beers that have stood out to Whyman this week:

Steamworks Summer Ale
For the first time, Steamworks Brewing has produced a summer ale. Very orange, zesty, it is an easy drinking 4.8 per cent wheat ale. Bright citrus and fruity hops, joined by grains of paradise for a little spice.
Available on tap at Steamworks and in tall cans (473ml) both on their own in four packs and as part of the summer mashup sampler pack. Speaking of beer labels, I really love the sun on these cans—  it's gorgeous.
Lions Summer Ale
Granville Island has come out with a summer ale as well.  You may remember back to the days when there were winter and summer solstice ales from G.I.B.
Nowadays, they're called The Lions. Lions Winter Ale has been around for a while and is now joined by the Lions Summer Ale. Weighing in at 4.7 per cent, this one is easy drinking and refreshing. Tropical fruit and biscuity malts, with a slightly tart finish.  Available in cans and bottles and at the taproom on Granville Island.
Park Life Passion Fruit Ale
Bomber Brewing's super popular Park Life Passion Fruit Ale is back. I call it an old favourite, but it's only three years old.
This is an American blonde ale infused with passion fruit juice.  It is crisp and tart, and totally tropical. Sweet and sour balance each other on top of this summer ale that still manages to taste like a beer (as opposed to a radler). 4.5 per cent. Available on tap at the tasting room and in six packs of cans.
With files from CBC Radio One's On The Coast
beer beer column beer pun bomber brewing cbc website craft brewed granville island brewing on the coast park life rebecca whyman sexism steamworks stephen quinn summer ales