- September 30, 2015
my notes from yesterday's beer column on cbc radio one's on the coast with stephen quinn
wherein he told everyone that i skip and prance around town this time of year (which may or may not be an accurate portrayal)
and we drank fresh-hopped beer, and extolled its virtues:

Hops are harvested once a year, and must be preserved in order to brew with them all year round.  They’re either frozen whole or ground up into pellets... But at harvest season you can use them fresh, which you will also hear referred as wet or green.
When you use the hops wet instead of dry, you have to use them right away.  They are very delicate little flowers and the oils degrade quickly.  They must either be dried right after picking, or immediately thrown into a brew.  We're talking within 24 hours of being picked kind of immediacy – there’s no dawdling with hops.

Harvest season was the end of August and beginning of September... which means that fresh-hopped beers have begun hitting store shelves over the past two weeks.  As they are limited releases, as soon as you hear that one has been released, you’d better be en route to your local beer purveyor, or you’ll miss out.

Fresh hopped beers should also be drunk right away.  These are not beers for saving, they’re meant to be drunk while all the fabulous hop flavour and aroma are fresh and vibrant.  This is part of what makes this time of year exciting – the harvesters were in a hurry to harvest while the hops were at peak flavour, the brewer had to hurry to brew within 24 hours of the harvest, you have to rush out to buy the beer as soon as you hear it’s in stores, and then you have to hurry up and drink it – no need to be polite - open and enjoy as soon as you can.

Also, we’re very spoiled in this neck of the woods.  We live near the best and biggest hop-growing region in North America.  Not everyone has as ready access to fresh-hopped beers.  You’re definitely drinking “local” when you drink a fresh-hopped beer.

Fresh hops impart more of a green, grassy, herbally flavour than dry ones.  A more delicate, mellow, but brighter and vibrant flavour.  It’s a little hard to describe.  Kind of comparable to a freshly-mown lawn.  Or using fresh herbs instead of dried.

Then we tasted one [yay!] - the one that started the local craze several years ago, Driftwood Brewing’s Sartori Harvest IPA.

The hops used are from the Sartori farm in Chilliwack.  They are harvested, then rushed over to Victoria where they are brewed with the next morning.

Fresh hops are less predictable than dried ones – this means that you never know what this year’s version of a wet-hopped ale will taste like.  It might be very similar to the one brewed last year, or it may be very different.  Beer nerds love to talk about this year’s vs. last year’s vs. that really fabulous one three years ago.  I can’t actually remember what I thought of last year’s Sartori, besides that it was yummy!

This year's is a hop monster!  In a very good way.  Resiny and piney and full of hop flavour, while still offering some nice malt balance. 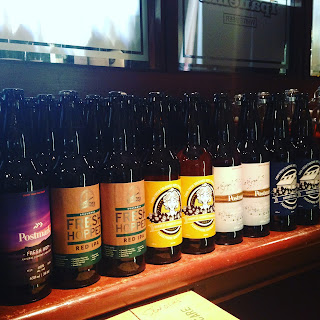 Fresh-hopped beers to get before they’re gone! (and this is by no means an exhaustive list)

- These ones you may be out of luck for as they came out last week:

Bomber Brewing’s East Van Smash – this is a fresh hopped version of their Single-Malt Single-Hop india session ale – SMaSH... get it?

Off the Rail fresh hop ale – available at the tasting room.

- These ones are available right now - run, don't walk, to your nearest private beer store and grab what you can!!

Steamworks Hop Attack – Sartori Ranch Centennial hops teamed with an IPA from Steamworks.  This seasonal, dry hopped IPA’s ingredients are completely sourced within 500km of the Steamworks Brewery. This collaboration beer is brewed using entirely BC hops and malts from BC hop grower Chris Sartori. Using fresh Centennial Hops, this vibrant, floral brew exudes a citrus, earthy aroma. Round that out with a pale and honey malt and a beautiful balance is created. 650 ml bottles wrapped in brown paper. 6%.

Persephone Harvest Golden Goddess Ale - I love it when someone wet-hops an ale other than an ipa or a pale ale!  Made with goldings hops picked August 23rd. 5%.  650 ml bottles

Bridge Brewing Red IPA - made with 500 lbs of locally-grown hops.  Magnum for smooth but intense bittering, nugget for zip and spiciness, cascade and centennial for a blast of floral, citrus and grapefruit aromas.  7%, 80 ibu, 650 ml bottles.

- These are coming up - watch social media to find out exactly when they'll be available: 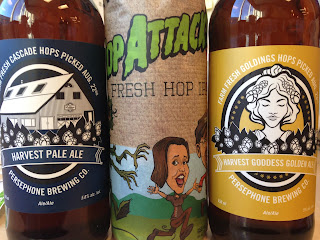