Green Flash has done it again! We have teamed up with another World Class Brewery, Founders Brewing Co. to produce a new collaboration, Linchpin IPA! Join the Green Flash team in the Tasting Room on Tuesday, May 1st for a special Release Party!“There’s a lot going on in this beer with two yeast strains, copious amounts of wheat malt, and a big focus on ‘C’ hops to deliver a citrus explosion,” explains Green Flash Brewmaster, Chuck Silva. “In fact we lined up more than a dozen hop varieties in the brewery to select three hops with the biggest citrus character to dry hop the beer.

“This golden beer pours with beautiful, frothy white beer foam that lasts due to bottle conditioning. Gently rousing the yeast that settles in the bottle will result in a fuller texture and a more cloudy white appearance. The citrus aromas that jump from the glass are largely tangerine up front with other types of citrus notes that mingle with the Belgian yeast esters. Hop flavors of bitter orange zest dominate the brew and linger to the finish with a nice play of American and Belgian yeast combo.”

A beer with so many components can be held together with a “Linchpin”. The official “Linchpin” of this beer is the skillful collaboration between the two breweries to create a unique hop-forward brew. Linchpins are symbolic: two simple shapes that combine to strengthen a bond amongst many different pieces. 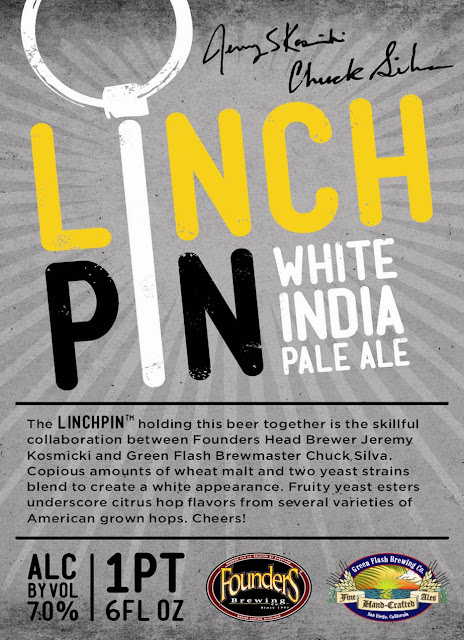