- November 01, 2010
ron dyck, the marketer for cannery brewing was at firefly on friday evening to do a tasting.
he brought the cannery line featured in the mixed six pack with him, as well as the limited release wildfire ipa and seasonal maple stout.
i of course had several tipples of each, because you want to make sure that the quality remains the same from can to can and bottle to bottle
just trying to be the best beer taster i can be
you know, taking one for the team and all that.... 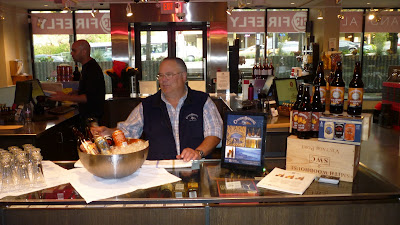 i am really very in love with the wildfire dark ipa
and everyone i've shared some with is loving it too
and its working for me as a session beer
gotta love it when someone does the black ipa right!
(even if i'm supposed to call it a cascadian brown ale now)
cannery only makes one batch of it a year, so when it's gone, there won't be more until next year
good thing i bought another six bottles...

i quite enjoyed the maple stout as well
for a sweetened beer, i didn't find it overly sweet or cloying
even after tasting it after the ipa and the black ipa
not a beer i'd make into a session beer, but quite enjoyable
this is their winter seasonal and will be available until april
"stout, dark and handsome!"