- November 02, 2010
i attended the "evolution of the ipa" tasting at firefly last week
i was so excited that they were having a whole night of ipas!
and i wasn't disappointed

there were only two ipas on the list that i hadn't yet tried (one because its limited release and the other because it was only just released)
but that meant that i could focus more easily on comparing and contrasting the hops varieties, strengths and malt balances between the beers

we got lots of great hand-outs
a hops profile chart, a beer evaluation sheet, the history of ipas and a beer aroma wheel
not to mention all the great information our fearless leaders had to impart
i feel like i got a lot more than just a tasting

we began the night with samuel smith's india ale (5%) from england
this is one that i had tried just the night before and not liked
i found it had a biscuity nose and felt kind of belgian
but the further i got down my taster glass of this semi-traditional british ipa, the more drinkable i found it

next up was brooklyn brewing's east india pale al (6.8%) out of new york city
it poured with a great head, quite carbonated, lovely nose
this was more what i expect from an ipa - to be like a pacific northwest ipa
the brewers used a recipe from the victorian era, with some english hops (kent golding) and some pacific northwest hops (willamette, centennial and amarillo) which give it a nice citrusy, spicy, floral aroma
nicely balanced, could definitely drink this as a session beer 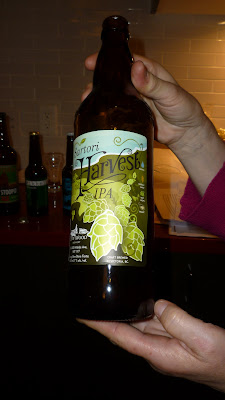 driftwood brewing's sartori harvest ipa (7% 66 ibus) was up next
these bottles came from lundy's private stash, and i'm thrilled that she sacrificed them to the cause
i love me a wet-hopped beer!
fresh hopped with centennial hops from sartori's farm, this is a beer of great beauty
even if everyone who had it last year said that last year's brew was better
driftwood is the only brewery doing a fresh hopped ipa
everyone else are making extra special bitters with the fresh hops (phillips, granville island)
fresh hops should be added within 24 hours of the harvest to get the full flavour, and added at several points during the brewing process
you don't want to store this beer - the hops degrade over time and lose their great bite the longer you age the beer
look for this one again the last week of september next year
and find yourself lots of other great fresh hopped beers at hopfests all down the west coast 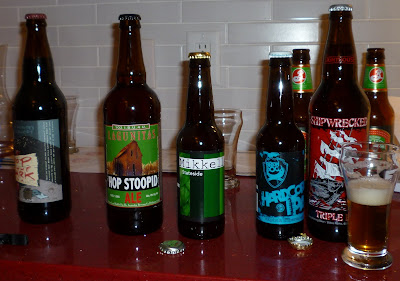 also from lundy's personal stash was deschutes brewing's hop in the dark (6.5%)
i love the hop in the dark and was very, very, very happy to see it in the line up
great to have a black ipa (cascadian brown ale) in the list, but especially this one that i just don't get very often
cascade, centennial and chinook hops
(probably the best hop combination on earth!)
amazing head, lovely brown colour, great hop nose
i can taste the malt, but it doesn't overwhelm the hops
wonderful balance and uber-drinkability
i could drink this beer alllllll night long! 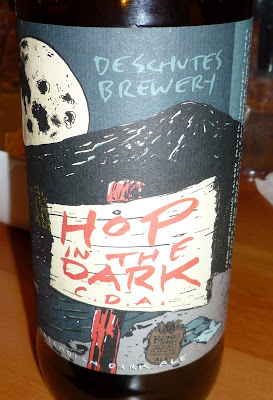 from oregon to california, next up was lagunitas hop stoopid (7.5% 102 ibus)
not nearly as bitter tasting as you might expect 102 ibus to be
pale and clear, a good food pairing beer
grapefruity, very malty to balance all those hops, but definite hop nose and taste
i do enjoy this beer but wouldn't want to drink more than the one big bottle of it
it just gets too bitter on the back of your tongue if you have enough of it 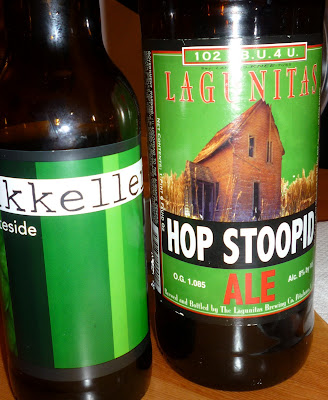 mikkeller's stateside ipa (7%) was next
now here are guys from denmark who came to the u.s. to check out the ipa revolution and take that learning back home with them
this is denmark's ode to the american ipa, and not just in name
cascade, centennial and chinook hops
they use lager malts (munich and pilsner) for balance
which give it some belgiany notes to my palate, which makes it not my favourite ipa around
it tastes like an ipa though, don't get me wrong, and is quite drinkable
there are just so many other ipas around that get me more excited!

jumping from the upstart danes to the bad boys of brewing in scotland, brewdog's hardcore ipa (9.2% 150 ibus) was up next
now these guys get blamed a lot for getting people drunk on their high alcohol volume beers
but that's not their goal - in fact they're lobbying to get smaller pour sizes legalized in britain to combat over-drinking of higher alcohol beers
they just want to brew punk rock beer
the hardcore is an imperial ipa using scottish malts with pacific northwest hops - centennial, columbus and simcoe initially, and then dry-hopping it again along the way
malty nose with caramel or biscuit (you know, the stuff i don't like)
balanced between the high ibus and the malts
you can smell the alcohol a little bit on the nose
but overall quite drinkable if you can handle your higher alcohol volumes!

last up was the lighthouse brewing shipwrecked triple ipa (10%)
and i gotta say, i absolutely love the bottle design
only offered in 650ml size, this is a departure for lighthouse
and the highest volume beer of the night for us, hence its appearance at the end of the night
double the malts and triple the hops
amarillo, columbus, perle hops - 3 intense hops combined
maris otter malt
golden colour, i'm getting a slightly alcohol nose instead of hops
it tastes rather malty-fruity, with hops back
not as good as i was expecting it to be
a case of judging the beer by its great bottle design?