- March 07, 2011
february 9th's beernesday (aka the first beernesday after being on the wagon for january and then in mexico for two weeks)
tasting notes:

i began my debauchery with a pint of rogue's yellow snow ipa
(this is the one i had a bad bottle of that once and so have to keep quality testing every opportunity i get...)
"holy hops! after so long without hops i'm feeling like i'm home!"

followed by a sampler of some old favourites to welcome me home, and one experiment:
north coast's pranqster belgian style golden ale
st. a's said:  brewed using a mixed culture of antique yeast strains that produce a floral nose, a full fruity flavor and a clean finish
i said:  for a belgian, its not tots awful.  i kinda like it.  i mean i don't want a pint of it or anything crazy like that...
and since i hate the belgians, that's practically a glowing review!  and would be the "experiment" in my sampler

rogue mogul madness
st. a's said:  hoppy, caramel aroma, burgundy in colour with an off white head.  intense flavours of citrus, and complex notes of nuts, berries and mocha
i said:  deeeeeelicious heart heart heart i wanna marry it
apparently i really quite liked it 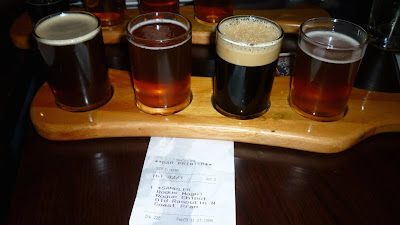 north coast old rasputin russian imperial stout
st. a's said:  a rich, intense brew with a robust palate, a fruity nose and a warming finish.  very complex.
i said:  yes, intense
and apparently that's all i had to say on the matter

then on to a pint of driftwood's fat tug ipa
st. a's said:  a northwest style india pale ale that is characterized by an intense hop profile of grapefruit and melon and restrained malt notes
i said:  huh, not my favourite tonight

so i moved on to the tree double hop head ipa
st. a's said:  loaded with five different hop varieties, this bold imperial ipa is not for the faint of heart
i said:  nothing
apparently it was too late in my drinking to do more than mark down that i ordered it
go me!
beer beernesday driftwood brewery hops ipa north coast brewing co. rogue brewery st. augustine's tasting notes tree brewing company