i began this night of far too many beers and a nasty thursday morning with a sampler
howe sound's high tide hemp and honey ale
st. a's said:  a smooth lighter ale brewed with barley, hemp and honey.  brewed for the annual test of metal mountain bike race in squamish
i said:  i like it.  not so light but i can see it being awfully refreshing after biking

lagunitas brewing's the hairy eyeball
(i mean how could i not with a name like that??)
st. a's said:  big, brown warmer with several types of chrystal malt
i said:  dark and delicious

howe sound's rockfish red ale
(fundraising ale for cpaws)
st. a's said:  a red malty ale with a pleasant citrus note brewed with chinook, cascade and mt. hood hops and munich, caramalt, chocolate and roasted barley
i said:  i like it, i like it a lot.  looking forward to buying a case in squamish on march 19th in support of the fishies.  i have a major love for howe sound!

rogue chatoe dirtoir
st. a's said:  jet black in color with a tan head, medium to full bodied, deftly balanced, seamless dark roasted malt flavors with a smooth bitterness
i said:  so dark & malty - completely opaque.  ya know, bridget needs to try this one!
(in fact loved the dirtoir so much that i got all the other stout lovers at the table to try it, and they all bought pints...) 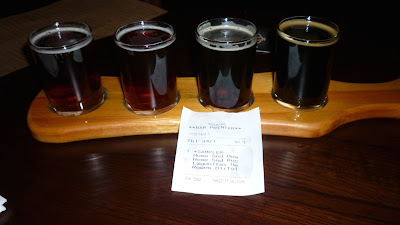 after the sampler, i had to move on to pints of my ipas
its just how the night had to go...

dead frog citra ipa
st. a's said:  a true ipa with BIG citrusy hop flavour and robust alcohol content
i said:  i really heart the citrus
i used to love dead frog - back when they first started out i thought the nut brown was a masterpiece, but they've been a bit less than consistent since then... and i know some beer geeks who hate this ipa... but i love it, like a whole lot!

howe sound total eclipse of the hops
st. a's said:  a supremely well-balanced and drinkable imperial ipa weighing in at 90 ibus and 8% alcohol
i said:  always heart this
and i do.  its a staple for me whenever i can get my hands on it!

tree brewing double hop head ipa
st. a's said:  loaded with five different hop varieties, this bold imperial ipa is not for the faint of heart
i said:  dryish, not as citrusy as the dead frog.  its okay but i don't love it
(funny how different ipas taste different to me depending on what they're next to... liked this one fine two week's before...)

and then because i apparently don't love myself enough, i had another pint of the total eclipse
i mean you gotta while its still around... 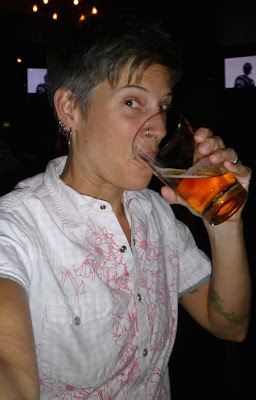